The "Modern Lovers" author decided to open Books Are Magic after her beloved neighborhood bookstore closed. 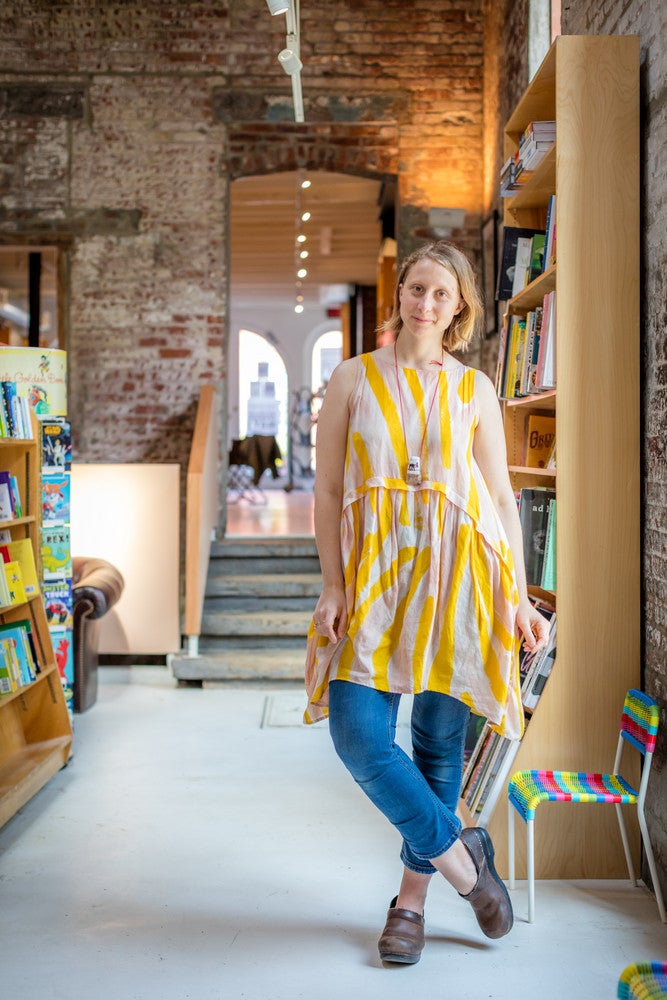 Walk into the just opened Books Are Magic in Brooklyn’s Carroll Gardens—which soft launches today in honor of Independent Bookstore Day and will officially welcome visitors on Monday—and you might not find flying carpets (yet…) but there is a feeling that a little pixie dust has been sprinkled everywhere.

(Modern Lovers, The Vacationers) and her husband Michael, a graphic designer, only signed the lease for the former clothing store in February and came up with the whole idea to start a bookshop just six months ago, when their neighborhood’s beloved Book Court closed after 35 years of being in business. “People were heartbroken—I was heartbroken!” says Straub. “We needed to offer people a rope to hold onto.”

With two months to pull everything together, the couple set to work on the easiest task. “We worked for the Magnetic Fields for 10 years. I was Stephin Merritt’s assistant forever, and we would make and sell their merch on the road—that’s our comfort zone. It felt less intimidating to begin there.”

With a series of midnight blue mugs, enamel pins, stickers, and pens proving that the project was reassuringly real, Emma and Michael then turned to ordering books—10,000 to be precise—which will line the same wooden shelves sourced from Book Court.

Restaurateur and designer Matthew Maddy (a college friend of Straub’s) oversaw the build-out, adding extra streamlined shelf space where needed and scoring giant sheets of dead stock Formica in the perfect shade of dusty blush to use as partitions (the walls are painted Peach Kiss by Benjamin Moore).

On a tour of the shop, Straub points out some of her other favorite features: A deconstructed chandelier hanging above the kids’ area in the back with neon pink and orange wires she dubs “the octopus”—as well as papier mâché mobiles of Alice in Wonderland, James and the Giant Peach, and Harry Potter planned to be strung up in the coming weeks.

She promptly crawls into an octagonal reading nook built into a corner, explaining, “Whenever I have a phone interview, I sit in here.” (Conference cubbies: genius!) In the front, long rolling tables from Ikea will make space for events (39 are already planned for the summer, starting May 9th).

The pièce de resistance? A sink-in-and-never-get-up tufted leather couch, which comes straight from Straub’s dad’s office. It’s the same spot she used to sit on and read while growing up. The magic lives on.

Sunshine State by Sarah Gerard
The Twelve Lives of Samuel Hawley by Hannah Tinti
Delicate Edible Birds by Lauren Groff
A Grace Paley Reader
South and West by Joan Didion
Books Are Magic is now open at 225 Smith Street, Brooklyn. Check out Emma’s love letter to the indie bookstore in our Summer issue, on newsstands in May.

Read more: 10 Books for Mothers and Daughters to Share Books To Read In Honor of International Women’s Day The Best Books to Buy for Their Covers