Solange on Style, Originality, and Her Favorite Drugstore Beauty Product 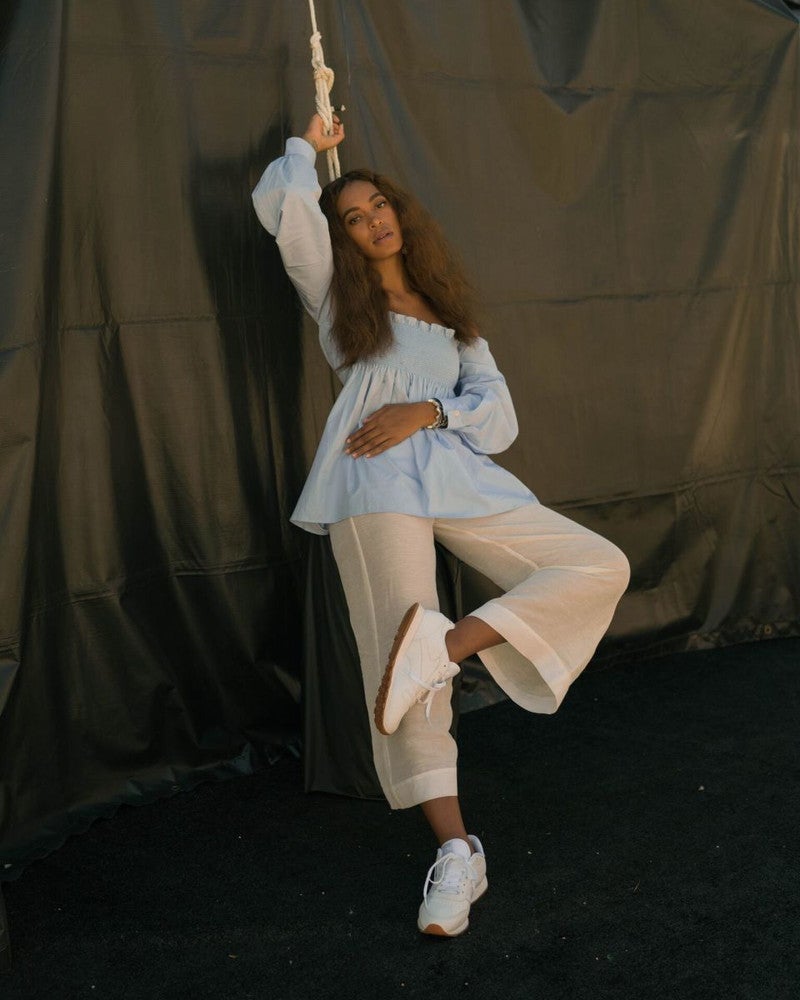 It was a cloudless, 102-degree afternoon in the California desert, which, for someone who hates the sun and heat, was hardly ideal. But the sun’s rays of wrath were swiftly outshone when Solange emerged onto the lawn of Reebok’s Classics Crib, home to a three-day experience celebrating the brand’s iconic Classic Leather through fashion, music and fitness.

Looking ethereal as ever in all-white, she started performing songs from A Seat at the Table to an intimate crowd, and suddenly, I had chills. She’s even cooler than one can imagine.

Following her breathtaking set, which included hits like “Rise,” “Mad, and “Weary,” among others, we sat down with Solange to chat about everything from originality, influence, and failure, to the beauty products she can’t live without.

On the difference between fashion and style:

“Style has to play a part in everything that we do. It’s the way we communicate who we are before we say a word. I used to be really interested in fashion years ago, and the more I got pushed into that world, the more it actually motivated me to write this album. I felt that I was setting my intentions too much on fashion and not enough on style. So, once I kind of made that decision to really do this for me, my style has evolved and changed so much. It’s really interesting because moving to New Orleans people are 100 percent distinctively themselves. That gave me the courage to express myself in ways that I maybe was a little more self conscious about living in New York.”

On what she’s most proud of:

“One of the things I’m most proud of in myself is that I’m okay to fail in front of the world; I’m okay to make mistakes and get back up and try again. You have to have that attitude when you want to experiment with different mediums.”

On originality and finding her voice:

“Individuality is very important to me. I grew up in a house with three older sisters. Kelly [Rowland] moved in when I was five, so my sister had a built-in best friend and that was just really unfair to me. And then my cousin Angie, whom I call my sister, also moved in; she was ten years older than me. So I was always really trying to make sure that my voice and my perspective were heard in a house of four older girls. So looking back, I hear these stories that, even at two, I was doing the most. But I do think that part of that was me trying to communicate and carve out a way to be heard. And I think that I always followed my gut. I don’t know why even at such a young age I always listened to my gut and sometimes it wasn’t right, sometimes it wasn’t wrong. I don’t know where that came from, but originality was key, and it was the way that I got to really define myself.”

On her style icons:

“A lot of my musical icons and style icons are the same: Kate Bush, Björk, Erykah Badu, Lauryn Hill, Kelis. Honestly, my mom. She’s what I think of when I think of classic. You can look at pictures of her from the ’80s and it’s just like, ‘God damn, Mom, don’t stunt on us that hard!’”

On her favorite hair product:

“Right now I’m super low-maintenance with my hair. Since I moved to New Orleans, I’ve started to just let my hair do what it does and when I’m performing, I get a lot more experimental. But when I’m at home in the creative process, it’s coconut oil or nothing, if that! Stylistically, after creating this album, I felt a lot lighter just as a human. That helped me to embrace lighter shades in hair so I’ve been slowly evolving in my hair color as I’ve been evolving as a human.”

On her favorite drugstore beauty products: