As a married mama of two, the British-born former stylist embraces routine and responsibility—without losing her edge. 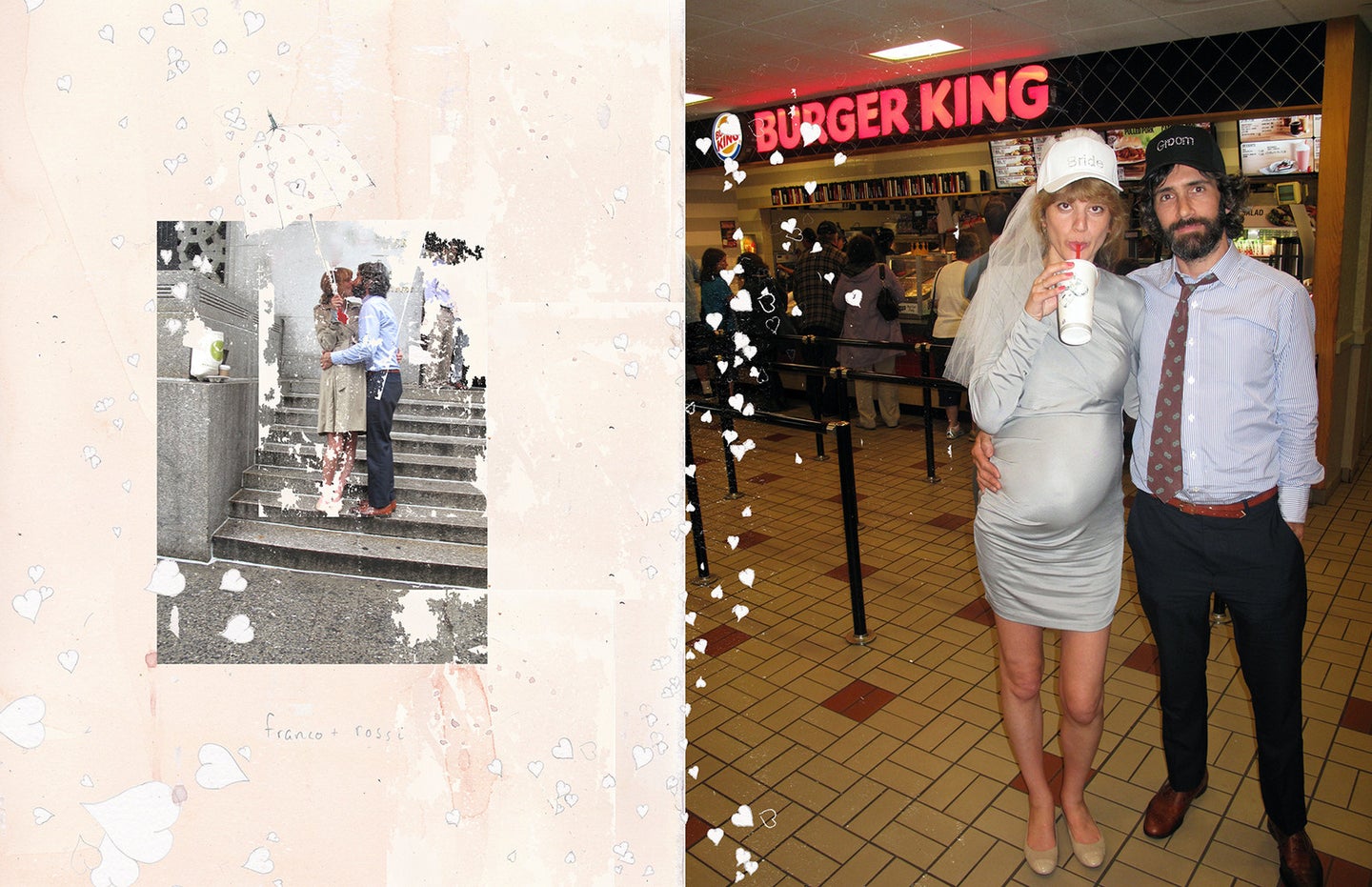 A self-described anxious introvert who spent the early part of her twenties running around and “kissing misfits,” painter and photographer Frances Tulk-Hart is now a married mother of two who lives in the country and spends her weekends planting flowers. Never one to abide by tradition, she and her husband carpenter Jason Rossi (check out their band Love Taps), got married at New York City Hall—”the whole thing lasted five minutes”—and spent the reception eating burgers and fries with their family and friends off Route 87 at a Burger King.

Oh, she was also eight months pregnant at the time. “I said my vows in a tight Alexander Wang dress,” says the lanky, 5’ 11” former stylist. “For the first time in my life I had boobs and a butt, and I was determined to show them off.”

As the couple approaches their fourth anniversary, we caught up with Tulk-Hart to reminisce about the wedding and chat about the beautiful, messy realities of married life.

On meeting her husband:

“We met through friends. We were both dating other people at the time, and he asked if I would like to join his band. A few months later, we were both single, and he confessed his feelings for me. Soon I realized I felt the same way and±boom! It was full speed ahead after that.

We started making our album, got pregnant, finished the album, got married, and a month later, had our first baby girl, Dotti. Interestingly, the first song Rossi wrote after we became a couple was about our future together with two daughters—foretelling the fact that one day we would have two little girls (which we do). It’s called ‘The Pear Of Trees’.

“All my ex’s have pretty much followed the same pattern: handsome, moody, depressed, addicted, non-committal. New York City is the land of Peter Pans. I would date a guy for a few years, break up, then run around kissing handsome misfits. There was lots of fun and heart aches.”

“We rented a wooden cabin in the forest on Christmas. Me, Rossi, the wee baby in my belly and my mum. Christmas morning we went for a walk through the snow. There was a random couple of chairs in the middle of one field which I thought was the coolest and ran over to them. When I turned around to talk to Rossi he was down on one knee asking me to marry him.”

“Both of us are anxious introverts, so we decided to do a

. Just family and five friends. The night before was a torrential rainstorm. My hair was already a complete mess from a dye job gone badly wrong—orange and dry as hay. Add crazy showers and humid air and an orange fluff ball sat on top of my head. Thank goodness one of the guests gave us a wedding trucker cap.

One of my best friends Sabine gave me and my family her country house for the weekend. After the ceremony, we headed upstate to celebrate, but on the way there stopped at Burger King at a rest stop off Route 87. I wouldn’t have changed anything about the day, not the rain or the hair, or the burgers. It was all love, laughter, tears and magic.”

“I’ve never felt like a team before in any relationship until now. I’m no longer one; I’m four. I think this is the first time in my life I haven’t felt lonely. But it can be tough, too. We grew up in very different households. Communication is difficult. Kids are tough. Add fatigue, money stress, and short fuses, and it’s a lot. I’ve changed so much since I got married and had kids, I think I’ve got stretch marks on my soul.”

On work and life in the day to day:

“The key thing that works for me is not to sit down and breathe until the babes are in bed. If I sit down and relax, then I’ll lose the rhythm, and it’s game over. I’m not organized by nature at all, but I’ve had to learn. Plus my husband has OCD, and mess makes him twitch.

Ideally, I want a full-time nanny, a housekeeper, and a cook so I can just concentrate on work during the day. But we have none of those so I have to juggle. I work when the baby naps, and a couple hours at night when the kids are in bed. I try to go to sleep early because I’m also up two or three times a night breastfeeding.”

On making home a home:

“Our older daughter Dot loves listening to anything Disney; Rossi usually listens to Bruce Springsteen and U2 while he’s cooking—he makes the best vegetarian pizza. I like all of the above, plus The Hours soundtrack.

We moved to the country nearly a year ago, and we’re currently building our first vegetable garden and planting flowers. It’s all very cozy. I still can’t believe I’m responsible for building the foundation that our kids will make their memories from.”