4 Hidden Messages in the ‘The Handmaid’s Tale’ Set

There’s much more than meets the eye. 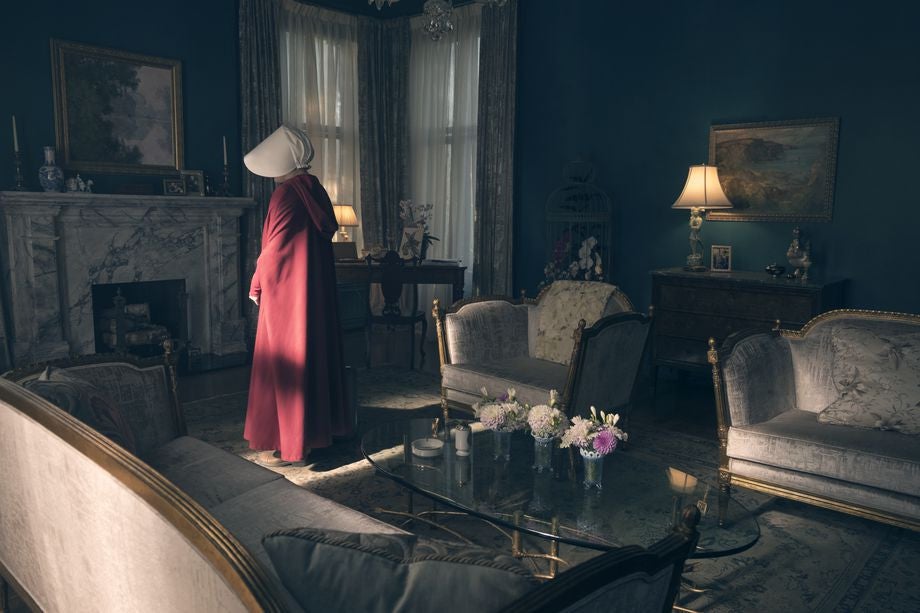 If you’re not already obsessively watching The Handmaid’s Tale on Hulu, you definitely should be. The television adaptation of Margaret Atwood’s classic 1985 novel has been garnering critical acclaim left and right, and it’s easy to see why. The show, set in a dystopian future, follows the life of Offred (played by Elisabeth Moss), a “handmaid” whose sole purpose in her new society is to bear children for the upper class of Gilead, the totalitarian regime where the show takes place.

But while the plot of the show is gripping and especially poignant in the current political climate, there’s another aspect of the show that’s been grabbing our attention: the decor. Production designer Julie Berghoff has said that every bit of the set design, from the props to the room decor, was extremely intentional and painstakingly selected.

Here are four things you should know about the set of The Handmaid’s Tale that you might have missed while watching.

The Commander’s house is a microcosm of Gilead.

“This house is Gilead. The commander is the patriarchy. The women in the house occupy the different statuses… you have to be able to build a whole world out from the house,” showrunner Bruce Miller told The Hollywood Reporter.

In the show, the different members of the household occupy different spaces, indicative of their place in society. For example, Offred is mainly confined to her room, which was designed with the limitations of Gilead’s women in mind. Berghoff put in reminders of Offred’s old life, like a desk and the outline of a mirror, to symbolize her new one: one where she, a former book editor, is forbidden from reading or writing, and where vanity in any form is prohibited.

Elsewhere, the Commander’s office is closed off from the rest of the house (and off-limits to the women in the house, except by invitation) and is basically a showroom filled with objects representative of the male-dominated society. “Books, art, sexual art, alcohol. He pulls out Scrabble, and I’m sure if he smoked he would be smoking cigars with the commanders in there,” Berghoff told Architectural Digest.

The color-coordinated costumes play a key role in the decor of each set.

The minimalist white decor of Offred’s room both makes her dress stand out and is reminiscent of a sanitarium, while the old-timey and intricate decor in the Commander’s office contrasts with his plain gray suit and reminds the viewer of his station.

As Gilead is meant to be a text-free world, all the labels were handcrafted with unique symbols.

To reflect the reading ban in Gilead, production had to work tirelessly to create an entire new system of symbols. The art department of more than 100 people needed months to create over 500 unique symbols and labels to be used around the new society.

“The grocery store was probably one of our hardest sets because we fabricated every single label there,” says Berghoff. “My graphics team painstakingly designed hundreds and hundreds of labels and then applied them to certain things.”

A careful balance of old and new was a driving force in every decor decision made.

One of the more difficult parts of creating a whole new world for TV is making it realistic. Since Gilead exists in the future under a puritanical regime, Berghoff was tasked with striking a balance between modernity and antiquity. “I wanted viewers to remember that this isn’t the past or future, it’s now,” she told Curbed. “It has to feel real, like it could happen to you.”

To accomplish this, the production department scouted out locations in Canada, where the show shoots, that looked distinctly modern without being overrun by advertising to adhere to the no-text policy of Gilead. In some instances —such as with the supermarket— the crew had to build entirely from scratch to get the desired result.

Get more behind-the-scenes secrets, from Architectural Digest, the Hollywood Reporter, and Curbed.