A Downton Abbey Movie Is Happening

So naturally, here are some ways to bring the Crawleys's aesthetic into your space. 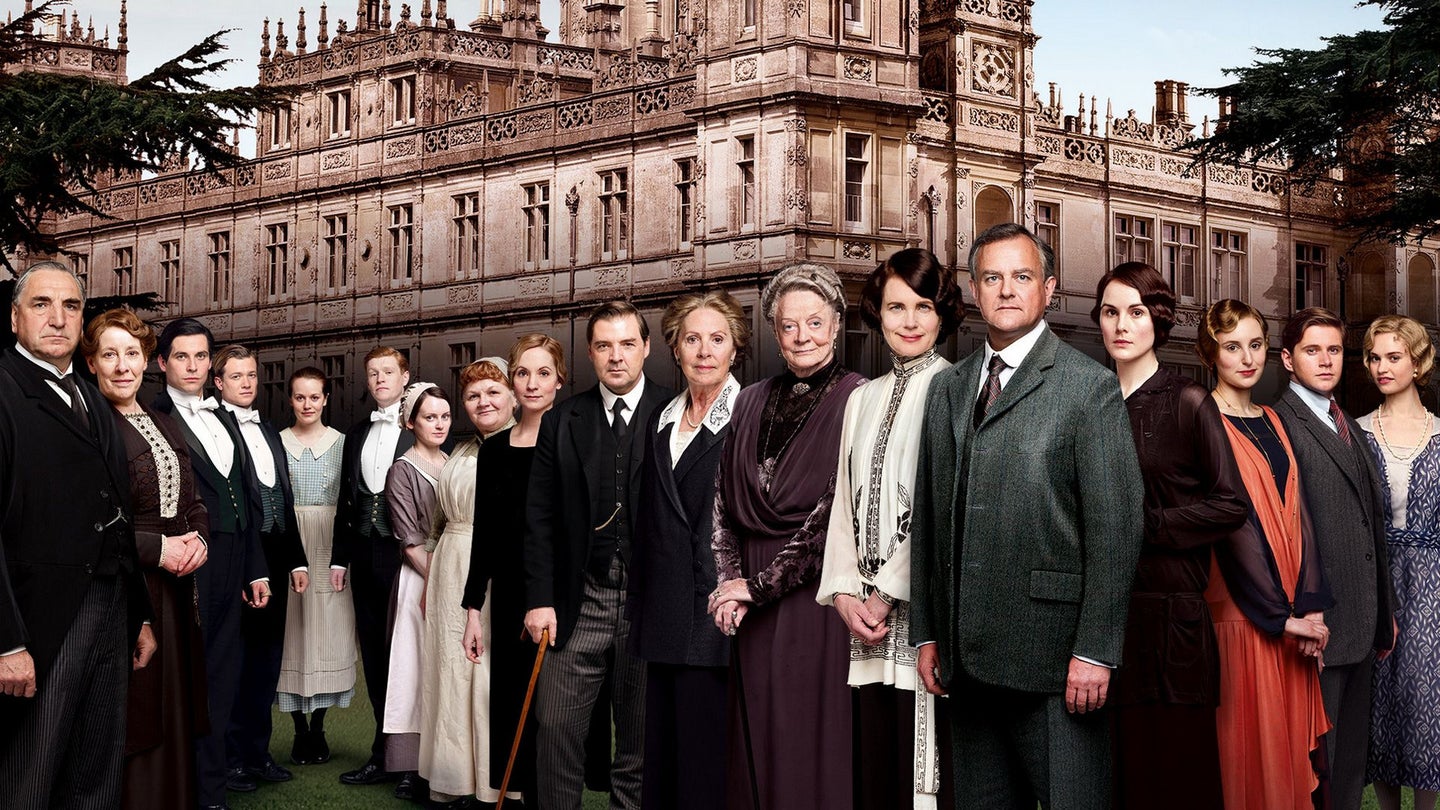 Downton Abbey fans, rejoice! Word is that the beloved series is set to debut on the silver screen, and we couldn’t be more excited. In true fashion, we took it upon ourselves to scheme up a few ways to recreate the look in our own homes. Here’s how to make your house look (and even smell!) like the Crawleys live there (along with a few ideas that will help you scratch the English country house itch)!

Don’t you just hate it when you’re in the South West Upper Billiard Room and you have to march down the stairs for a snack? Well, if you had a set of servants’ bells you wouldn’t have to! Yes, you can not only still purchase these, but you can do so from the company that supplies the show with them. Antique Door Bells carries not only the traditional mechanical bells but electric ones as well. Of course, supplying the servant to respond to them is up to you.

What geometric patterns were to the 80s, so damask was to the Edwardian aristocracy. At Downton it was used on the walls, on the furniture, even occasionally in the clothing. Today, it’s still a staple pattern of most fabric and wallpaper companies and is available in a variety of both traditional and cheeky versions like the one here.

Given the abundance of wildlife and natural wonders found across the English countryside, it’s hardly surprising Victorians and Edwardians found so many ways to use animals as décor. While you certainly don’t have to devote an entire room to taxidermy, there are some very easy ways to bring nature inside.

A few well-displayed tokens of nature on a bookshelf or table is all that’s really necessary to get the same effect. Next time you’re on a hike or strolling on the beach, pick up a couple of shells, pebbles, sticks or even fallen bird feathers. Frame them or put them under a glass dome and you’ve got the look.

In a country that takes its flowers shows as seriously as this one does (remember the spot of bother over the Dowager’s winning streak?), it’s understandable that botanical art is such a decorating mainstay in English homes.

It’s not easy trekking over hill and dale, especially in that rainy English weather which is why beautiful walking sticks and umbrellas abound there. A hallway stand full of them will give you that “I just got back from walking the Highlands” look even if you live in Chicago. If you don’t happen to have a hallway do what they did at “Brancaster Castle” and just put them in the dining room!

John Derian may be the current king of découpage but he was hardly the first to try the art form. The Victorians were mad for it and were constantly making “scrap screens” from cut outs and photographs. While that period slightly pre-dates the Downton era, the Crawleys very likely had one lurking in a closet somewhere so why not make your own? Cover it with floral motifs and the Union Jack and you’ve got a great piece of (almost) British folk art.

An English country house without a little silver on display is like, well, not an English country house. Whether it’s a tea set used at breakfast or a set of trophies used as planters, silver is a signature of these homes and can easily be picked up at your local thrift shop for just a few bucks. Don’t turn down a great piece just because it’s tarnished—a little polish and even the grubbiest bowl will look as good as new!

Love them or hate them, animal heads were a thing in that period and given the frequency with which the upper classes hunt, most English country houses are full of them. Luckily there are a lot of ways to get the effect without affecting another living thing.

A great alternative to an expensive masterpiece is a good print of the real thing. Thisone, done by the king of English horse portraiture, George Stubbs, is available for under $30 on the National Gallery site.

If pink is the navy blue of India as Diana Vreeland once said, then surely a soft blue is the navy of England. The country does this shade like no other and if you want a truly authentic tonal vibe, get yours from Farrow and Ball. If you’re not quite sure which shades to go with, for a small fee they’ll send a consultant to your home so you can get that perfect country blue feeling. We’re guessing that’s what Isobel Crawley did to get the stunning shades used throughout her house.

Created just a few years before the fictional start of the Downton Abbey saga and still in production today, this scent would have been exactly the kind of thing Robert Crawley would have burning as he sat at his desk, worrying about how to keep Downton afloat. Named after another famous English manor house, this fragrance has a clean, the-Dowager-is-coming-over-tonight-so-nothing-too-strong feel to it. For a deeper, more the-Turkish attaché-is-on-his-way-over scent, try the unusual Malabah candle.

If there’s one thing English country decorating is all about, it’s the vignette; a little staged display of objects oh-so-consciously positioned to look as unselfconscious as possible. The great thing about vignettes is that they can constantly be changed (and used as an excuse to buy new things).

It’s been said that when Queen Victoria first moved into Balmoral, the royal family’s country home in Aberdeenshire, Scotland, she fell so in love with tartan that she had the whole house done in it. While you don’t need to go quite that far, a little touch of it evokes the feeling of Englishness (even though it’s really Scottish) like nothing else. Just a table runner or a small antique tartanware box on a table is enough to make the statement.

Take into consideration the tempestuousness of the English climate, as well as the fact that in 1912 the Crawleys were still at least a decade away from radio, let alone Netflix, and you’ve got a culture that liked to read. A lot. So much that books became and remain one of the most prominent design features in an English manor house.

Since most of us don’t have the luxury of a library like that of Lord Grantham, a few of your best books neatly situated on a small table will do. Of course, if you’re a true bibliophile as the homeowners above, you won’t let a little thing like dinner stop you from displaying them.

Don’t let Robert Crawley’s orderly desk fool you. One of the most fascinating things about the desks in English country houses is that they are almost always covered in so many little knickknacks and trinkets that there’s almost never enough space to actually function as a desk. A true English country house desk will be covered top to bottom in letter openers, paperweights, family pictures, magnifying glasses, letters and at least one completely outdated piece of equipment.

While the Crawleys’ home may look neat and presentable thanks to all those maids running around, if you want a truly authentic look you’ll include just a touch of eccentricity somewhere. That armadillo shell you found on your last hike? Bring it out! All truly British homes have at least one head-scratching corner in which the homeowners pile weirdness on top of weirdness.

Whether or not they’re willing to admit it is another story but if they’re being honest, most Brits past a certain age have at least one or two pieces of royal “china” in their possession. Issued mostly for coronations, births, and weddings, these  commemorative mugs make great vases, make-up brush holders, or even, well, mugs. They can easily be found for just a few dollars online.

Fox Hunting Motifs Although the ethics of fox hunting are debatable, the beauty of the sport is not. While this adorable vintage wallpaper is probably something you’re more likely to find in an American attempt at English decorating, it doesn’t make it any less  charming.

Originally meant to protect the horses of the gentry from evil spirits, these brass ornaments eventually became serious collectables, so much so that there’s even a Horse Brass Society. Easily found on auction sites and flea markets their motifs range from naval ships to icons like Queen Victoria. Pick up a couple in symbols that mean something to you and use them as wall decorations.

In the days before selfies, people had to find a way to preserve the moment without sitting for a portrait every ten minutes so. They came up with the next best thing: silhouettes. Luckily, there are still a few artists who not only practice the craft but have found ways of modernizing it a bit.