These pendant lights were a must. 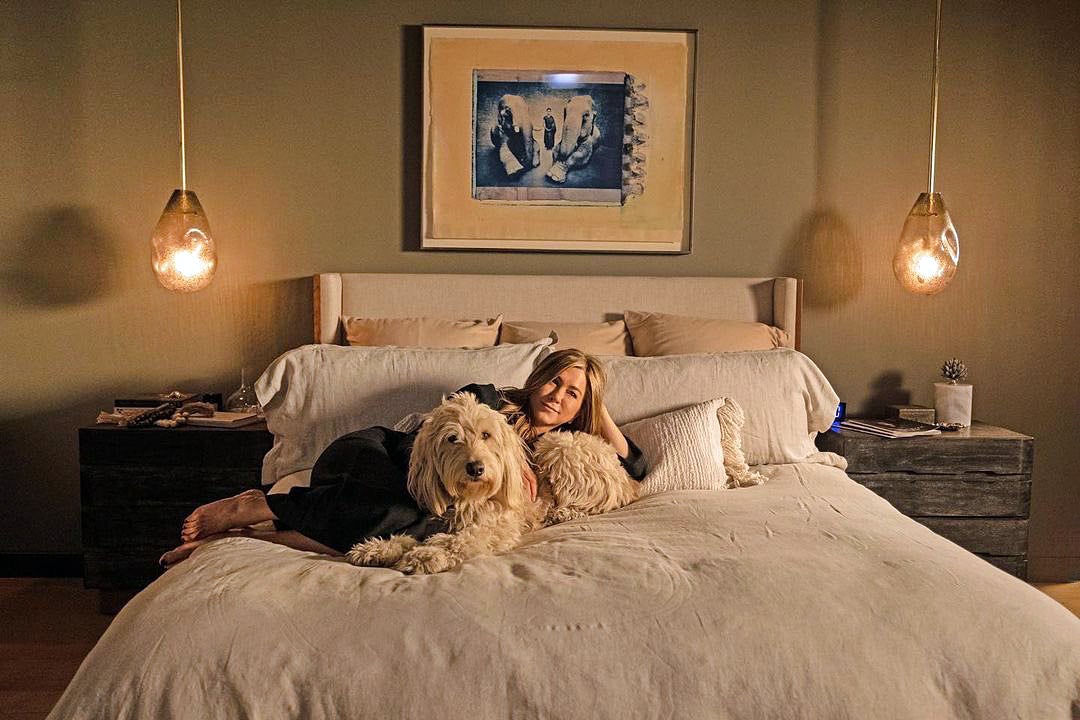 “If Jennifer Aniston weren’t an actor, she would be an interior designer,” says Nelson Coates, the production designer for season two of Apple TV’s The Morning Show. He should know: He worked hand in hand with Aniston on the series’ set design. “It was fun and pretty challenging—she has such high, refined personal taste, but my budget didn’t match her standards,” he admits, laughing.

As one of the executive producers of the Emmy-winning show, Aniston—who plays the role of Alex Levy, the coanchor of channel UBA’s The Morning Show—paid attention to the smallest visual details. “In this season, her character is opening a new chapter of her life. She has resigned from UBA and moved from her Manhattan penthouse to a cabin in Maine. It was important to make sure that her spaces were tailored and story-centric,” notes Coates.

In her New York apartment, the design team went for elevated linen fabrics and a beige and gray color palette. The huge marble tub in the bathroom, the hammered-metal wall panels in the bedroom, and the warm wood of the kitchen cabinetry are “a worldly acknowledgment of what you can get when you’ve got money and taste, like Alex,” says Coates.

The biggest challenge for Aniston and Coates was to convey her character’s sophistication in both Maine and Manhattan. “Jen would pitch me ideas, and then I’d come back with alternatives that had a similar feel but a different price point,” explains Coates. See those beautiful pendant lights in Alex’s new bedroom? “The original model was way too pricey, so we decided to make our own,” he says. They had a pro blow the glass and create the same fittings.

From on set to real life, here the production designer shares his best tips when it comes to getting an Alex Levy–style space on a budget.

Turn the Lights On

On The Morning Show set, Coates replaced all the regular cool lightbulbs with warm ones and placed a lot of bronze and amber-tone furniture close to the light sources, which makes eye makeup pop. “A space with good lighting and less furniture is always going to look better than a room filled with trendy stuff but the wrong light,” he explains.

Say No to Stark-White Walls

Instead go for “warm mushroom” paint, says Coates, and prioritize a darker shade (or the same hue in a different sheen) as your accent, rather than adding a contrasting color. The warmer the palette, the more nested you’ll feel.

Multiply Textures in the Same Colorway

From tiles to wallpaper to throws, the easiest way to make a space look luxe is to layer materials in similar shades. In the case of Alex’s Manhattan bedroom, a dark brown bench is a cozy complement to the greige linens and charcoal pendant lamps. “It creates a sense of harmony, and it’s soothing,” notes Coates.