It’s all about contrast. 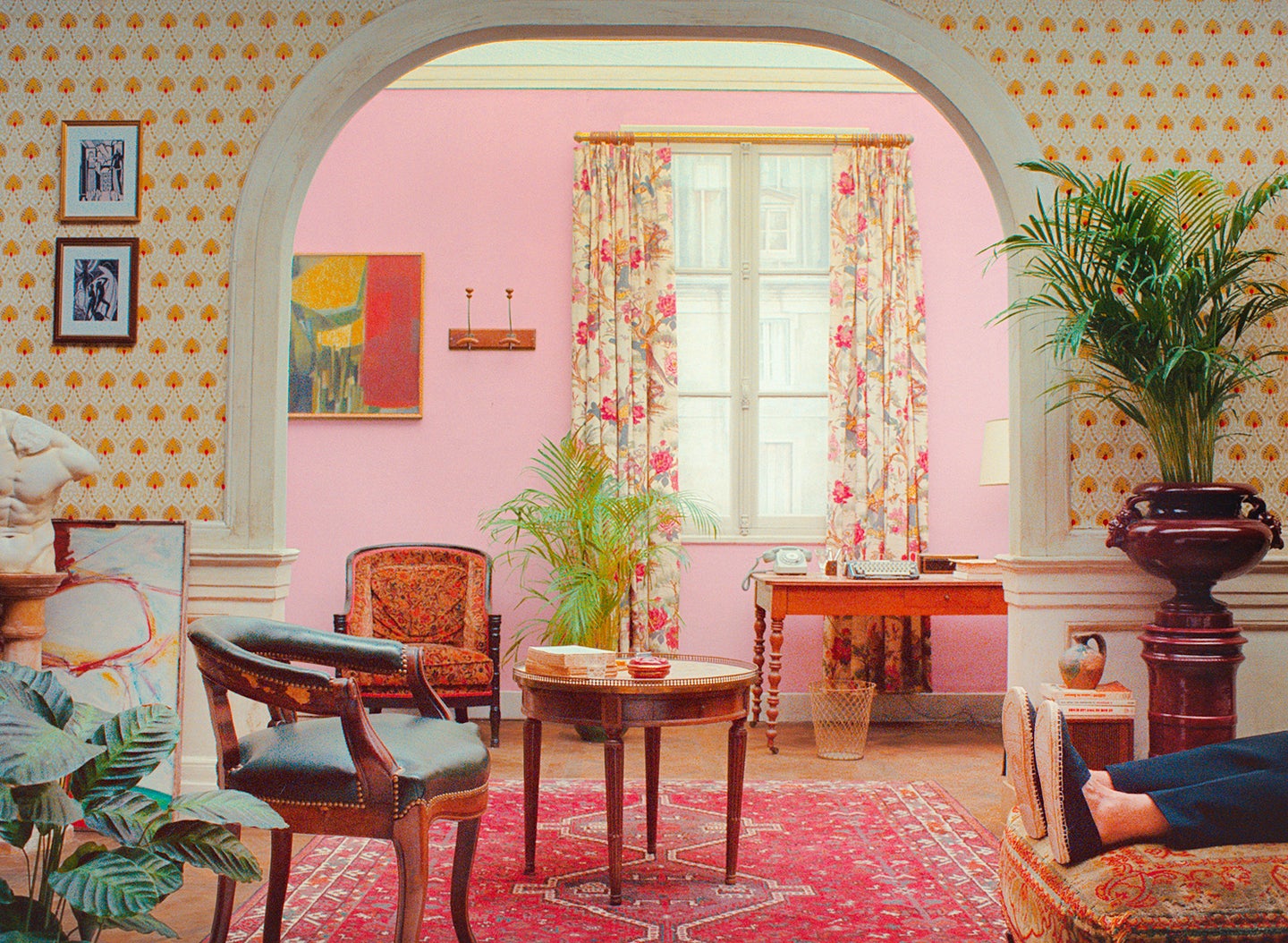 Sometime in the early 1970s, in the bustling downtown of a fictional French city named Ennui-sur-Blasé, sits the headquarters of a weekly literary magazine reminiscent of The New Yorker. This is the setting for The French Dispatch, out October 22—Wes Anderson’s latest film and his first live-action feature in six years, starring Timothée Chalamet, Léa Seydoux, Tilda Swinton, Bill Murray, and many more Anderson regulars as characters within the periodical’s pages. To build this bohemian world from the ground up, the director collaborated with production designer Adam Stockhausen (who won an Academy Award for his work on The Grand Budapest Hotel) and set decorator Rena DeAngelo (a newcomer to the Anderson crew). While constructing sets within a massive abandoned felt factory in Angoulême, France, DeAngelo says the duo “turned the whole town inside out,” searching for the perfect vintage furniture and evocative filming locations. Here’s a behind-the-scenes look at how they got every detail right.

With a team of in-the-know neighborhood shoppers, DeAngelo frequented antiques sales in nearby Bordeaux, in addition to knocking on doors and borrowing furniture from locals. Working off of reference photos compiled by Anderson that showed everything from early-20th-century Paris architecture to painter’s studios, she amassed a myriad of options for every piece of decor that made it into the film. The idea wasn’t to re-create each image but rather to capture “the spirit of the photo” with props like perfectly patinaed copper cookware, old-school jukeboxes, and curled-leg tables. “I had a serious table problem,” says DeAngelo. “I couldn’t stop buying fantastic French tables, until I was like, ‘Hi, Wes, I have these 40 choices.’”

Anderson is known for his thematic palettes: The Grand Budapest Hotel has its pinks and purples; The Life Aquatic its teals and reds. In this movie, yellows—a mix of citrons and butters and marigolds—set the mood. Finding the right intensity for each hue was just as important as choosing the proper shades. “We were trying to match the richness and depth of dangerous lead-based enamel from the 1950s with contemporary ingredients,” explains Stockhausen. Drawing inspiration from the 1956 film The Red Balloon, those more vibrant colors were contrasted with otherwise grimy, unromantic buildings to make the yellows really pop.

As the filming progressed, DeAngelo and Stockhausen got a better sense of the three main magazine writers’ personalities and, therefore, how their office spaces should define them—whether with neat stacks of orange-spined Penguin books (in the case of Lucinda Krementz, played by Frances McDormand), a worldly library (Herbsaint Sazerac, played by Owen Wilson), or fuchsia walls and potted plants (Roebuck Wright, played by Jeffrey Wright). “I rented truckloads of antique books and spent a week arranging them,” says DeAngelo. The pair revised and revisited their work throughout the shoot, often with the director adding that final je ne sais quoi himself by simply moving one object to the other side of the room. “He would make it perfect,” notes DeAngelo. “He just knew what to do.”

1. “We looked at people’s writing spaces and what books they kept around,” says DeAngelo. A few authors stood out to them in particular: James Baldwin, Simone de Beauvoir, Gore Vidal, Luc Sante, and A.J. Liebling.

2. Dial M for Murder, His Girl Friday, La Vérité, and other mid-century movies provided references for the shape and feel of the set—from the yellow café that’s the backdrop of a student revolution to the moody nighttime streets.

3. Abstract Impressionist painter Frank Auerbach was the starting inspiration for the creations made by character Moses Rosenthaler (portrayed by Benicio Del Toro), a French prisoner who becomes a celebrated modern artist.

4. Charles Marville and Eugène Atget’s photographs of pre-Haussmann Paris showed the architecture and old city streets that became the basis for the fictional city of Ennui-sur-Blasé.