How This Pro DIYed Stained-Glass Windows for Just $16

They even hold up to her 6-year-old’s fingerprints. 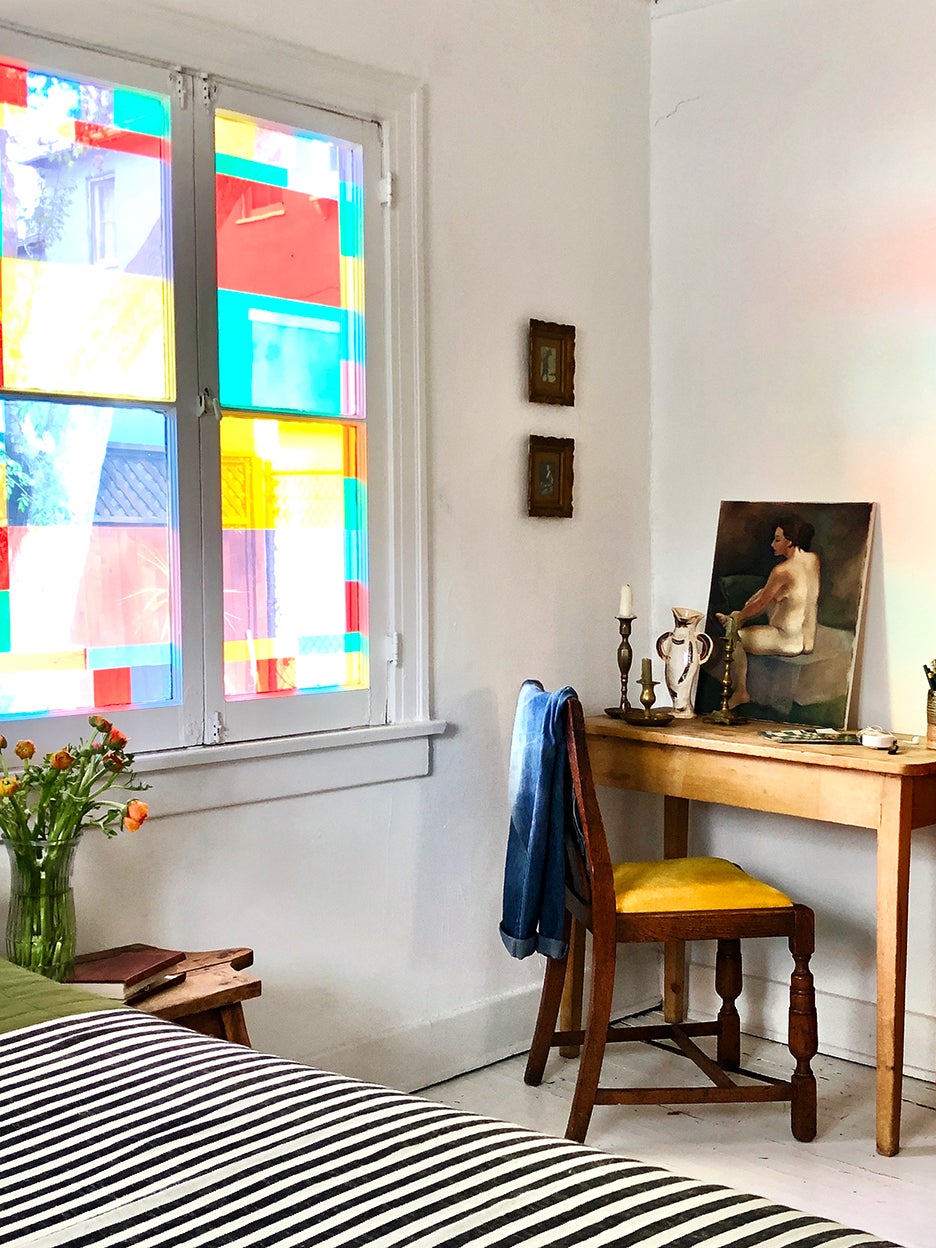 Gillian Lawlee was completely winging it. The Los Angeles–based creative director had purchased a packet of Technicolor film on Amazon and was in the process of applying it to her French casement windows for DIY stained glass. She started with the panes in her bedroom, which took about three hours, and then brought the leftovers to a smaller window in the hallway. “I just slapped them on to get a sense of it and left them there,” says Lawlee.

She had moved into her rental in the fall of 2019, slowly adding finishing touches to make the space feel like home. “I have always been enamored with stained glass and wanted it for as long as I can remember,” explains Lawlee, who was equally inspired by the old Georgian and Victorian houses in her native Ireland as she was by California’s Spanish revival cottages—both of which are known to feature rainbow-tinted glass. “The windows in this place just seemed to beg for it!”

The set she bought comes in A4-size sheets and is entirely self-adhesive, making it ideal for a temporary space; when it’s time to move, it peels right off. So far  the low-lift project has lasted six months without a single tear. To clean, she squeezes a dollop of Mrs. Meyer’s dish soap onto a cloth with warm water and gently goes over the surface to get rid of any scuff marks. The real testament to the DIY’s longevity? It’s even held up to her 6-year-old’s fingerprints. Which, as any parent can attest, is as glowing a review as they come.

Step 1: Do the Prep Work

Thoroughly clean the surface you’ll be working on to get rid of any smudges or fingerprints.

Step 2: Start in the Middle

The film can be tricky to cut into straight lines, so use as many full sheets as you can for the core of each pane, filling that out first before tackling the borders.

To stick each piece on, follow the instructions on the packet. Lawlee suggests keeping a wet cloth handy to give each area a quick wipe-over—it will give you more flexibility in manipulating the film and push out air bubbles. Start slowly with one side of the sheet, gently laying it down and using the cloth to smooth it over as you go.

Step 3: Fill in the Edges

Lawlee’s border design was dictated by what space was left, though every window will differ according to size. If you do end up with a little extra surface area to cover, trim tiles out of the remaining film in different colors. Use the blade and ruler to make sure every square or rectangle in one row is the same size. Arrange them in a mosaic pattern around the sides, tops, and bottoms, following the same application method used before.

Get ready to enjoy early-morning sunlight streaming through in vibrant pinks, blues, and yellows.