Almost Everything in This Bedroom Was DIY-ed

Even the ceiling fan got a makeover. 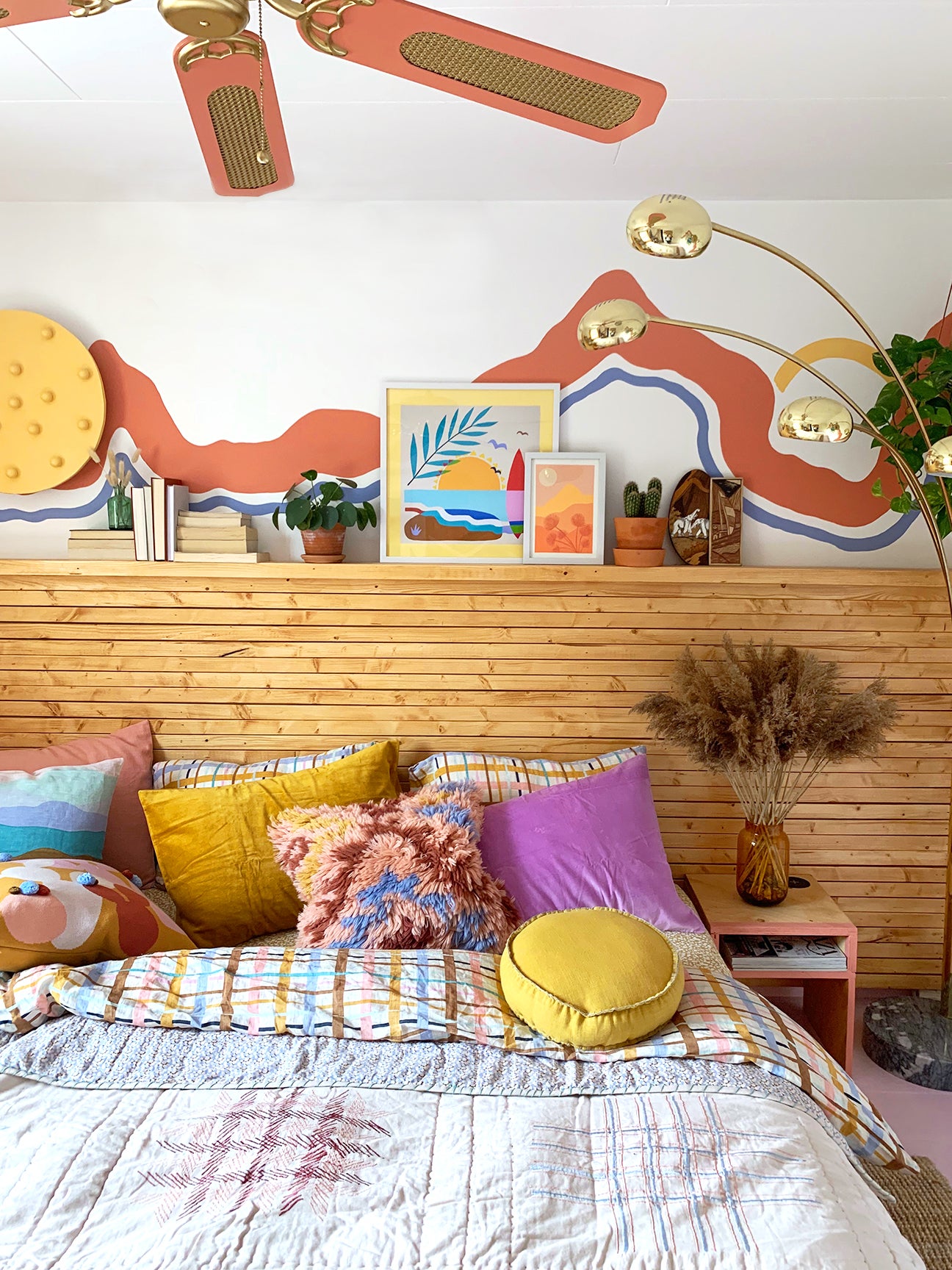 Here’s the thing about renovations: If you haven’t done one yet, it’s tough to grasp how tricky they can be. And once you have, a project gone awry can be enough to convince you never to so much as pick up another paintbrush again.

However, Christin Haussmann, a German blogger and owner of Earthly Urban Interiors, is an example of the best-case scenario. Not satisfied after tackling one (or two or even three) DIY updates in her bedroom, she redid nearly the whole space herself—yes, even down to the nightstand and sun sconce. The only things she bought were an armchair, floor lamp, and some of the artwork.

She drew inspiration from some of her and her family’s most-visited spots: the backcountry of Southern California, especially desert towns like Palm Springs. That explains the cacti tchotchkes and sunset color palette, the latter of which was decided by her bedding—the first thing she picked out for the place. Bubblegum-hued floors and plenty of natural materials finish off the no-rules-apply space.

All in all, the transformation took about a week. “My husband was away for work and I surprised him with a pink floor, a new bed, and painted walls,” says Haussmann. While, in some cases, an impromptu update would have caused at least a little bit of marital rift, everything worked out just fine—after all, Haussmann is no DIY rookie. We might not be able to overhaul an entire bedroom just yet, but a mini makeover of one corner? That we can manage. Haussmann gave us the lowdown on four of the standout moments.

“I have a thing for natural wood and wanted to use as much as possible in this space to give it an earthy feel,” explains Haussmann. She nail-gunned horizontal pieces of lumber to a frame (essential, so as not to end up with a million holes in the wall), then added a wide ledge on top to house things like books, artwork, and, of course, the requisite cactus.

It’s the coral-colored fixture that almost never was: “A few years ago, I was desperate to get rid of it and replace it with a normal light,” recalls Haussmann “I’m so glad that I never did.” Instead, she carefully dismantled each of the blades, taped off the wood parts, and spray-painted the rattan sections gold. Once those dried, she taped off the woven centers and painted the wood the same color as the walls for some uniformity—24 hours of drying later, voilà! A traditional eyesore–turned–integral design element.

Ditch the rulers and paint freestyle—that’s what Haussmann did, and according to her, it’s a lot more fun. “First, find inspiration. For me it was the mountain backdrop you see in and around Palm Springs,” she says. Sketch the shape lightly with a pencil, then fill it in with a small brush. “Since it’s all freehand, you can virtually make no mistake by stepping over the line,” she points out.

We see your open shelving and raise you this storage-meets-art combo. Haussmann’s was made with leftover plywood that happened to be cut into a surfboard shape. “Perfect for my Southern California vibe; even though there isn’t much surfing going on in Palm Springs,” she jokes. After painting the board—again, without a plan—based on more colors from her duvet, she drilled in a few wood pegs and laid shelves on top.

If you’ve been putting off a weekend project, consider Haussmann’s bedroom the kicker you need to get started.

See more DIYs to try: This Artist Took 100 Yards of Fabric to the Beach and Made a Sofa I Used Peel-and-Stick Subway Tiles to Transform My Rental Kitchen You’ve Tried Color-Blocked Walls, but Don’t Ignore Your Floors