Disguise Your Ugly (But Still Functional) Oven for $60

This designer’s fridge got a paint job, too. 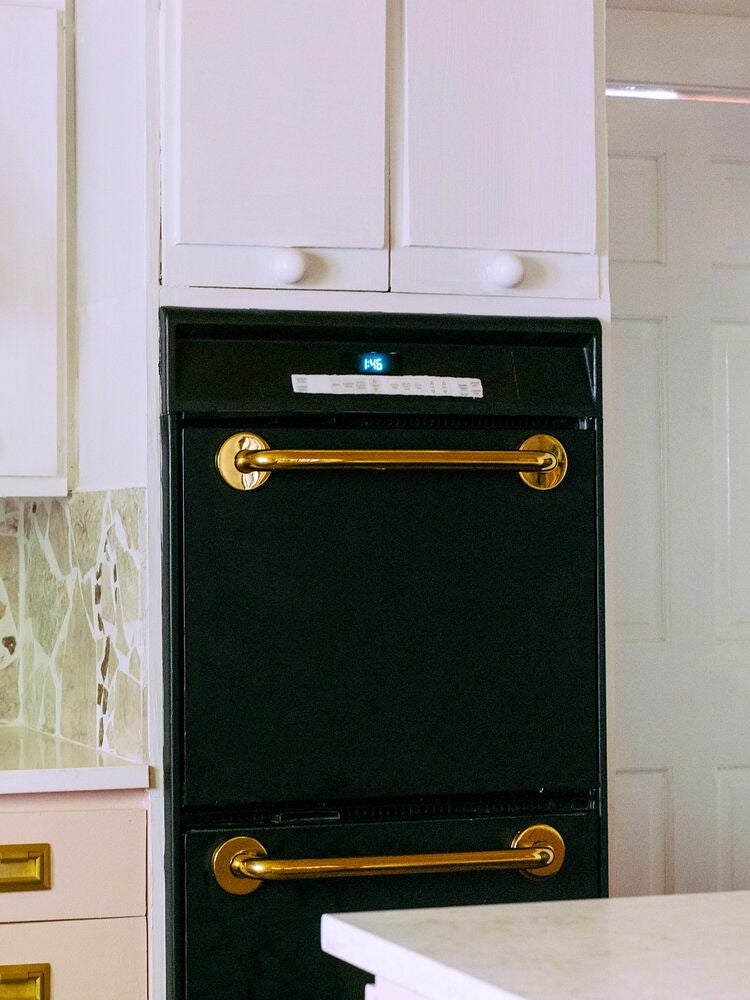 When Dallas-based designer Katie Sarokhanian decided to renovate her kitchen, replacing the ugly ’80s appliances didn’t sit well with her. “It’s so hard for me to get rid of something that works well,” she says. The fact that the white double oven and scratched-up stainless steel refrigerator (a $200 Craigslist score) “hurt her eyes” wasn’t a good enough reason to splurge on something up to date. (A new matte black refrigerator would have cost $3,000). So Sarokhanian took matters into her own hands and gave the appliances chic facelifts for a total of $235.

The genius lies in the designer’s material choices: She swathed the double oven in vinyl car wrap (renters, take note) and painted the refrigerator. As for the hardware, she shopped the bathroom aisle for those chunky brass details. Here, she walks us through the clever cover-ups.

After a year and a half of living with it and five kids constantly bumping up against it, she says it’s held up super-well. The secret? Self-etching primer, a type of coating usually used for automobile parts. After lightly sanding the metal surface with a hand-block, she sprayed the stuff on.

Next up: five coats of Sherwin-Williams Emerald latex paint in a matte finish in Tricorn Black, which she applied with a small foam roller. Then she screwed in three brass towel racks for the handles. “You can buy new refrigerator hardware, but it costs about $200 each,” says the designer. “That defeated the whole purpose of doing a cheap makeover.” The bars had the same 24-inch hole-to-hole ratio as the old ones, so they just screwed right in. “The reason the black worked so well is that the little rubber seals on the doors are black too,” she says. “It gave it a custom look, as if it was always supposed to be that way.”

Sarokhanian originally considered painting the oven as well, but she was worried about the surface getting hot. Plus, she had the opaque glass panel to consider. Eventually, she stumbled across cling vinyl wrap (the kind of stuff you’d use to put a business logo on a vehicle). Step one: Unscrewing the oven doors. “This was the challenging part,” she says. “It took me a good 20 minutes to figure out where the old hidden screws were.” Then, she cut the vinyl to size with a straight-edge knife and smoothed out any air bubbles with a credit card. (She decided not to cut out a hole where the glass window is, but notes anyone could easily go the extra mile.) “Having the solid black door gave it a more streamlined look and it didn’t take anything away from the oven’s utility,” she says.

Rather than cover up the existing handles with the wrap, too, Sarokhanian swapped them out for $18 brass grab bars (traditionally seen in ADA-compliant bathtubs and showers). She also sought out ones that had the same hole dimensions, so there was no drilling involved. Lastly, she painted the trim around the oven white so it had clean lines. “Even if this old oven stops working in the near future, the new look is completely worth the trouble and cost,” she says. You’d never know the whole thing was just smoke and mirrors.