Consummate Host Ken Fulk Thinks You Should Have a Good Time, Too

The designer’s spirited take on entertaining. 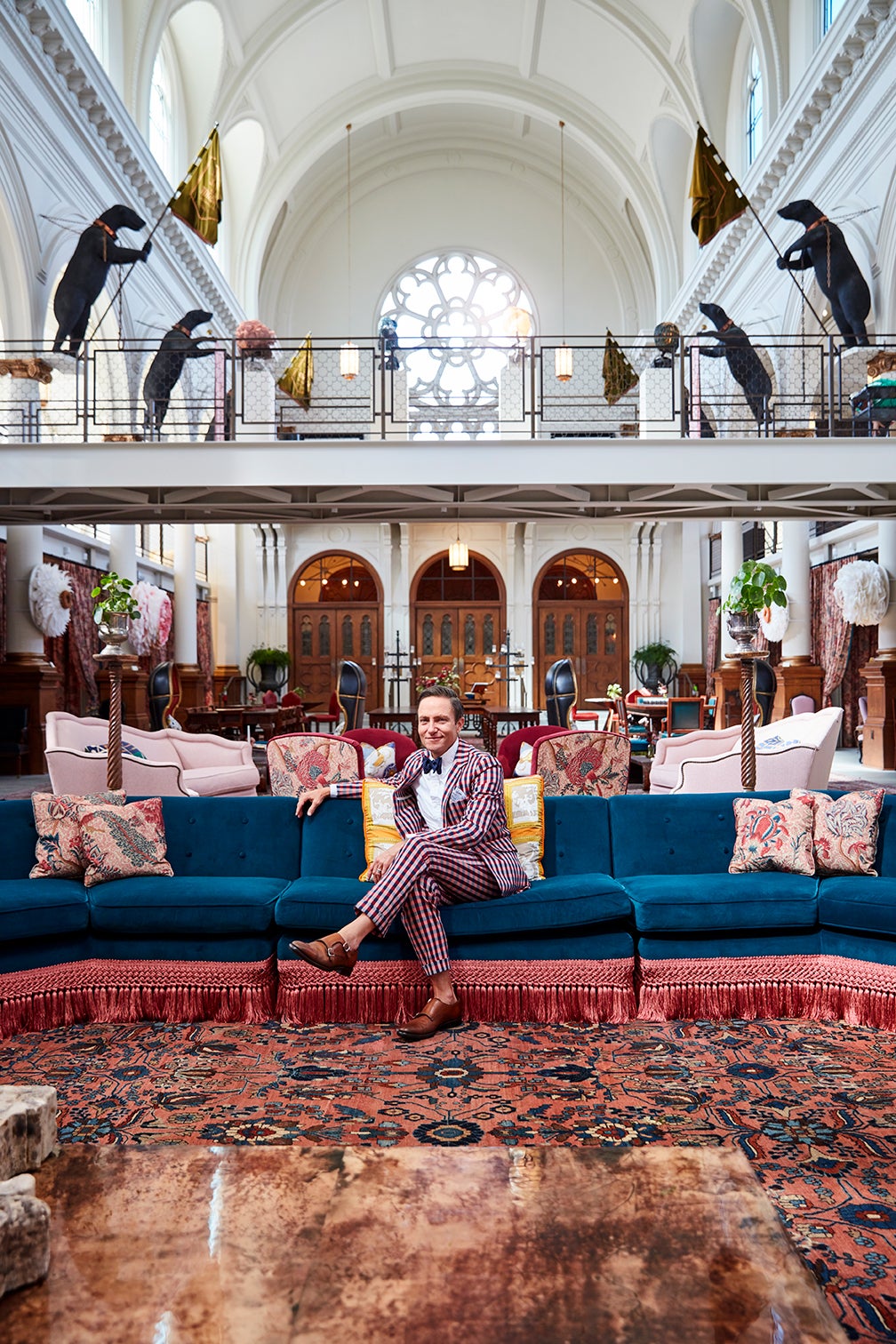 This story originally appeared in the Winter 2019 issue of Domino, titled “Fantastic Mr. Fulk.” Subscribe to be the first to receive each issue.

When Ken Fulk invites you to a Catholic cathedral for a cocktail, he’s not being playful. Although the San Francisco designer and entertaining mastermind is known for his twinkly-eyed wit as much as his more-more-more! sense of scale, Fulk does, in fact, mean church.

Named for the patron saint of workers, St. Joseph’s was built in 1913 and served the gritty South of Market community until 1989, when a 6.9-magnitude earthquake violently shook the structure (and the Bay Area), leaving the Romanesque-revival parish deserted and in disrepair for almost three decades. “When I first walked in three years ago, there were tens of thousands of pigeons. You’d move your foot and…whoosh!” Fulk says with a laugh, making a flutter-flutter-flutter sound. “The walls were black and smoosh-y. It had this decrepit grandeur to it, like in Havana or Sicily.”

Still, it would take a visionary (and self-avowed OCD-level doer) to lead such a massive renovation project. Fulk worked not only with the National Register of Historic Places (the 22,000-square-foot building is landmarked) but also state and local agencies. “Everything we did had to be run by all three!” he says. Reopened in late 2018 as St. Joseph’s Art Society, the deconsecrated space has been completely reimagined as a members’ club—and Fulk’s fingerprints are everywhere. California roses grown to his specifications seemingly sprout from every surface, their perfume wafting up to the soaring, 130-foot molded concrete ceiling. Life-size bears (papier-mâché works from famed Belgian taxidermists Jaap Sinke and Ferry van Tongeren) stand watch from the curved balcony. The eight lounge areas are swathed in 600 yards of Pierre Frey Le Grand Corail pink cotton fabric, while vintage finds from Fulk’s career-spanning hauls at the Bloomfield Antique Show and the Paris Clignancourt flea market have been covered in tasseled velvets and silk shantung.

And that cocktail you were offered? It can be mixed at the main bar on the ground floor (built with gothic wood panels reclaimed from a Midwest church)—or way upstairs at the Rose Bar, a softly lit, four-seat mahogany nook off a spiral staircase next to the choir loft.

All this Technicolor splendor serves as a backdrop to an equally ambitious philanthropic mission: to give back to the community via a nonprofit foundation and a packed culture calendar, providing a salon-style environment to members (Fulk calls them subscribers, much like for the theater or symphony) that fizzes with cross-pollination across the arts, tech, food, fashion, and design. “We’re continuing the church’s vocation of bringing people together,” he explains, “by elevating the shared human experience through conversation and creativity.” The best way to do so? Throw a party—something he more than excels in, having defined his career by dreaming up unforgettable events.

“I’ve learned that from the moment the first guest arrives, it’s my job to have a good time—and to bring everyone along with me,” Fulk says, laying out his party manifesto. “There is nothing worse than a nervous host.” Being organized helps, as does lowering the pressure. Fulk regularly hosts dinners for upwards of 50 people on the apse underneath a 50-foot dome inset with gold rosettes. Yet despite the ball gowns and bow ties, these are not pinkies-up affairs. Sometimes the Wedgwood china is used to plate pizza. “You can serve takeout,” Fulk affirms, “as long as it’s presented beautifully.”

Dress Up Your Space

On any given night, you might find Fulk sporting a three-piece plaid suit or a floor-length wizard’s cape—always worn with unironic fabulosity. That playful sense of style translates to St. Joseph’s interiors, where powder pink taper candles perfectly match the velvet club chairs, and oversize paper flowers (by artist Tiffanie Turner) are like the ultimate statement boutonnieres.

“These days we can silo ourselves,” says Fulk, commenting as much on guest lists as the state of the world. “We become these monolithic things, only associating with tech people or downtown artists or operagoers.” To counter that instinct, he livens up the dinner table by placing, say, a well-known socialite next to a leather daddy. “That’s much more interesting to me, and frankly it’s more interesting for them,” he says, laughing.

To keep the drinks and conversation flowing, Fulk favors serve-yourself-style options, like the festive Paloma Rosa Punch (a house specialty, featuring tequila, ruby red grapefruit, rose water, and lime) or his own version of bottle service. Premade cocktail mixers—including his infamous margarita with a spicy salt rim–are iced down in glass bottles, allowing guests to fill (and refill) their glasses.

More From Our Winter Issue: This San Francisco Home Expansion Was the Epitome of a Family Affair Zosia Mamet’s Upstate New York Home Is the Definition of Cabin Cozy Courtney Adamo’s Newly Renovated Cottage Is the Perfect Fit for Her Family of Seven