This Nautical-Inspired Reno Goes Way Beyond Anchors and Oars

Think a laundry room that feels like a store in Denmark. 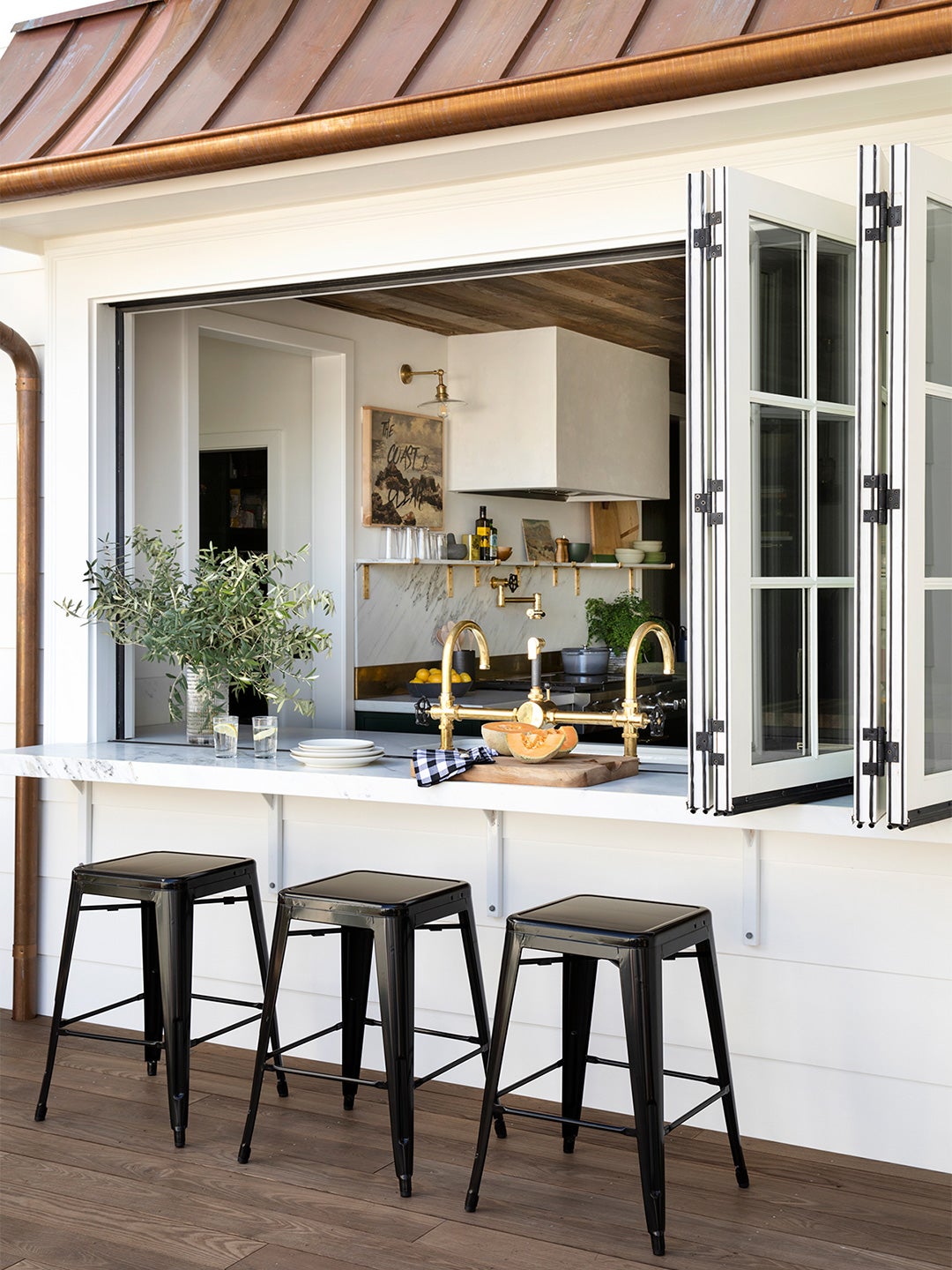 When designer Raili Clasen signed on to renovate a 1927 Dutch Colonial on the resort-dotted island of Coronado in Southern California, she knew exactly where to start: a vintage piano, which she immediately painted a lacquered raincoat yellow. “It was sourced two houses down,” Clasen explains—from the home of the project’s architect Eric Olsen’s mother, to be exact. The small yet eye-catching nod to the past—which Olsen gifted to the family: Candice Kislack, her husband, Chip, and their two children, Evelyn (5) and Catcher (3)—set the tone for the remodel. At that point, in the fall of 2017, “the walls were torn apart by rats,” Clasen recalls—but all she saw was the staircase. Her goal: Save the good bones. In addition to repairing original features, like the serpentine handrail and three-inch-wide red oak flooring found throughout, Clasen drew on the area’s long history as a naval air station base, adding oversize brass pulls in the kitchen (hardware suited fora ship’s galley) and navy camo wallpaper in the entry. Then Kislack called her up. “I don’t think we have enough color!” she announced, laughing. Here’s how Clasen and Olsen put a spin on tradition, without taking anything too seriously. 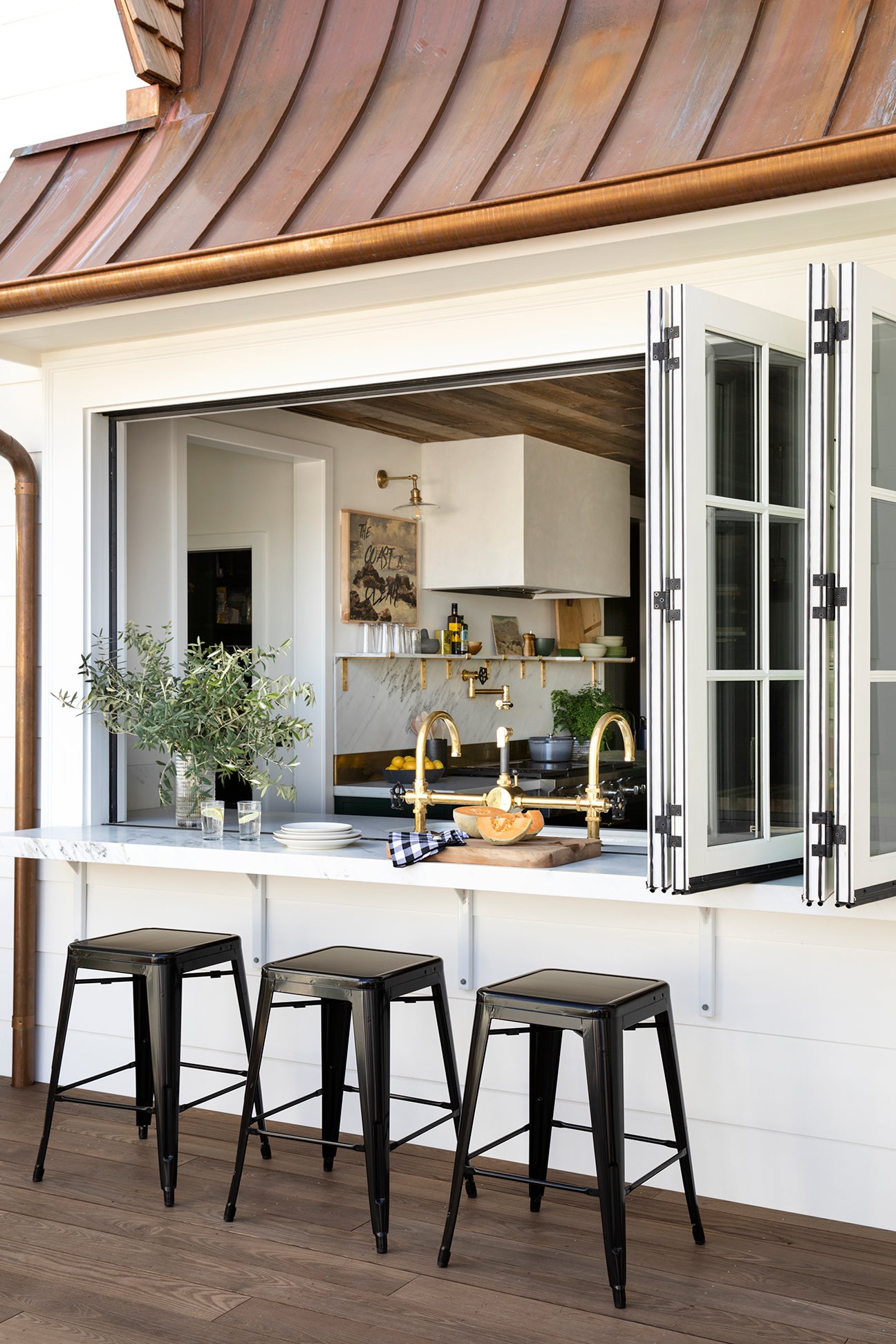 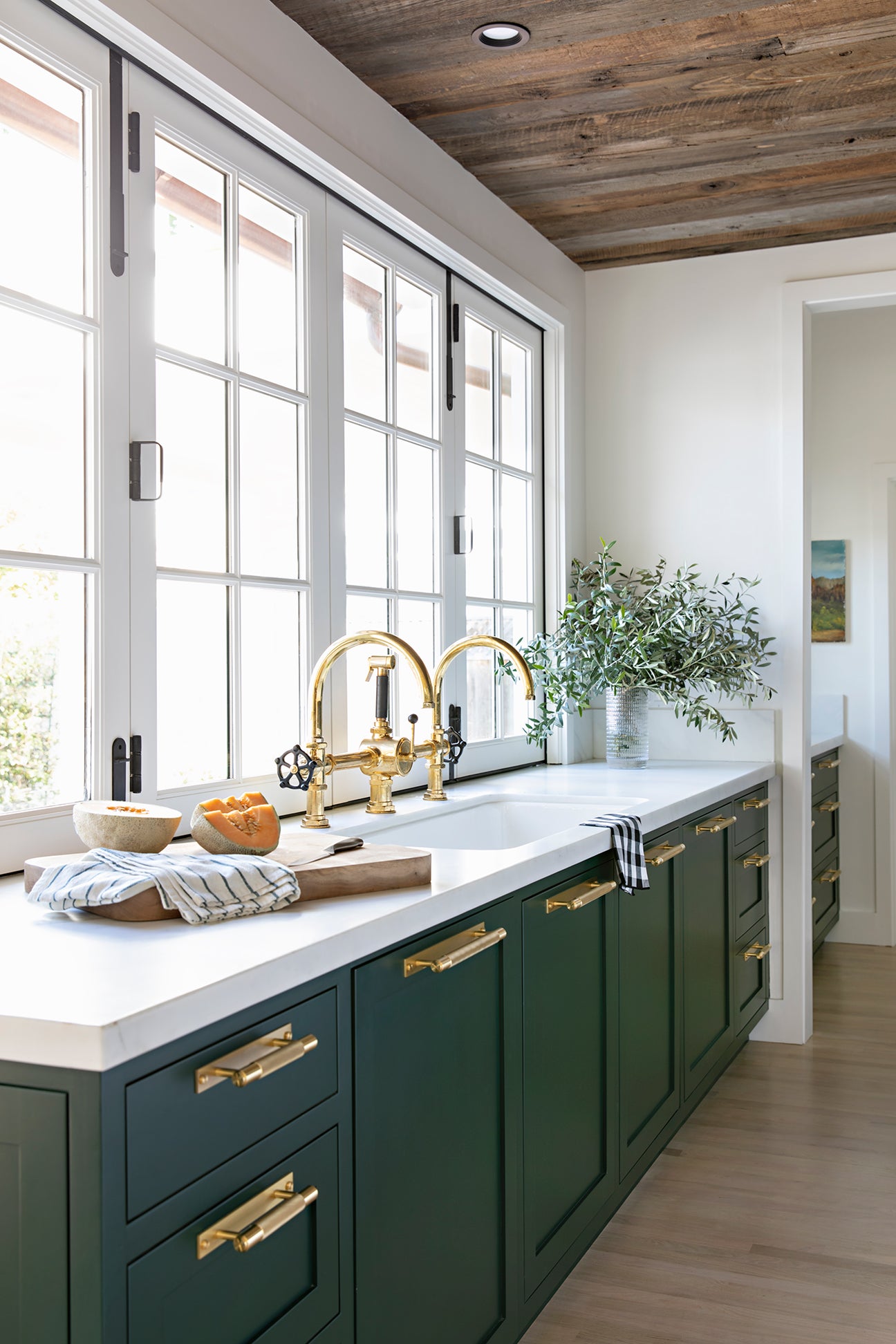 In the kitchen, Olsen managed to make room where there wasn’t any by enlarging the existing window and building an alfresco bar with a copper roof overhang, which will patina nicely over time (it also protects the marble countertop, a continuation of the surface inside). The new folding glass window can be swiftly swept aside when the Kislacks’ little ones want to grab a bite in between swim sessions at the pool.

The gambrel roof (a mainstay of Colonial Revival architecture) posed a unique challenge in Catcher’s room. “I didn’t know where to start and stop the drywall; I was dumbfounded,” Clasen remembers. Avoiding the headache altogether, she clad everything—walls, ceiling, and built-in desk—in six-inch-wide plywood boards, unconcerned with whether they would clash with the width of the existing planks (they didn’t). A lick of paint—technically, two, in the form of sporty racing stripes—was all it took to make the abrupt angles feel intentional and create a one-of-a-kind statement.

Traditional details, like Parisian-inspired ceramic tile and a soaking tub in the master bathroom (formerly a map room), called for contemporary vanities. While there was plenty of space to take the army green cabinets to the floor, Clasen mounted them instead. Those six unoccupied inches make everything look bigger, the designer points out.

Catcher’s bath is a similar story. With the trough sink offering little-to-no storage below, Clasen took the legs off a vintage fire engine–red locker and hung it on the wall to conceal not-so-pretty bath-time essentials. 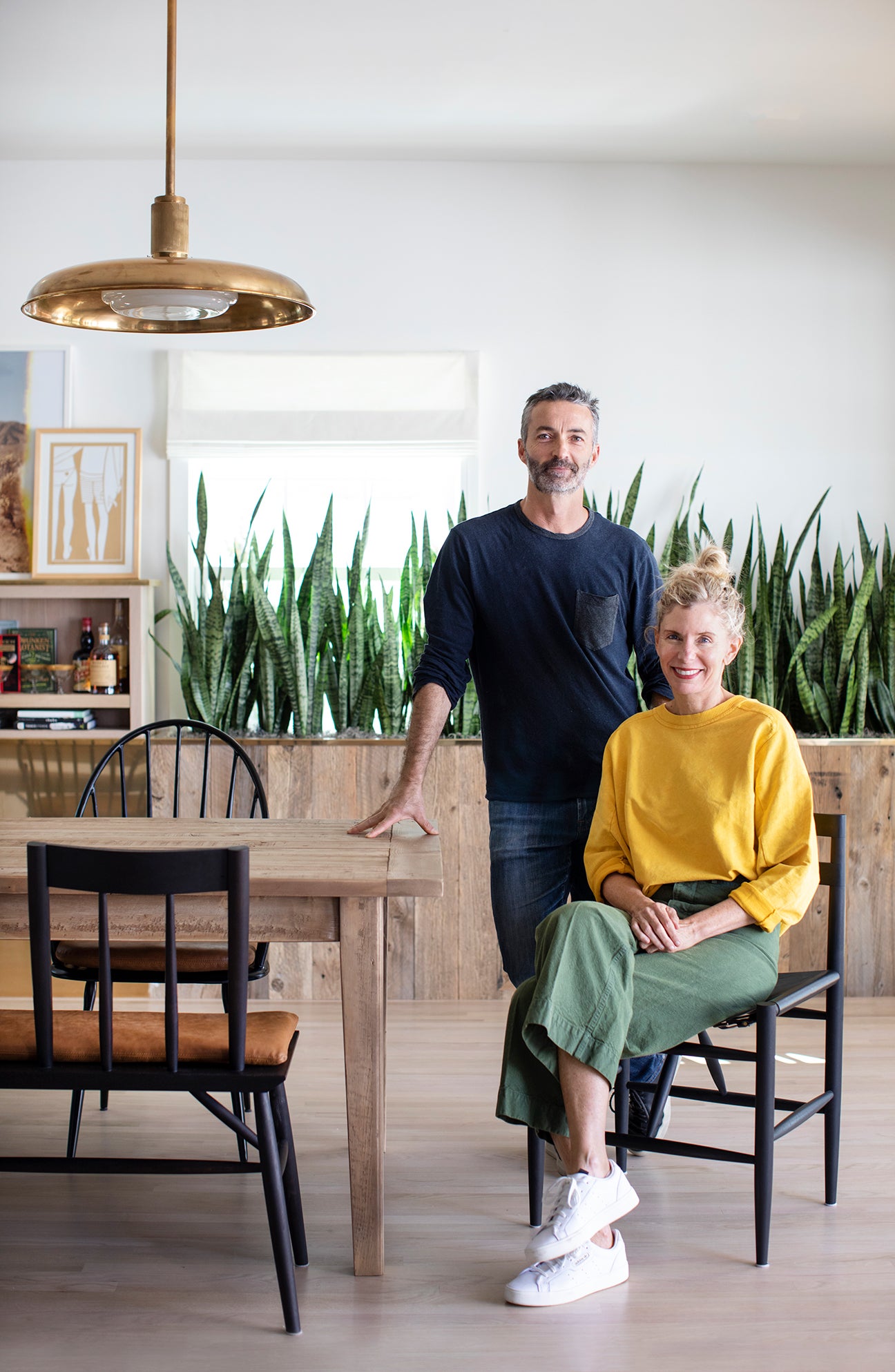 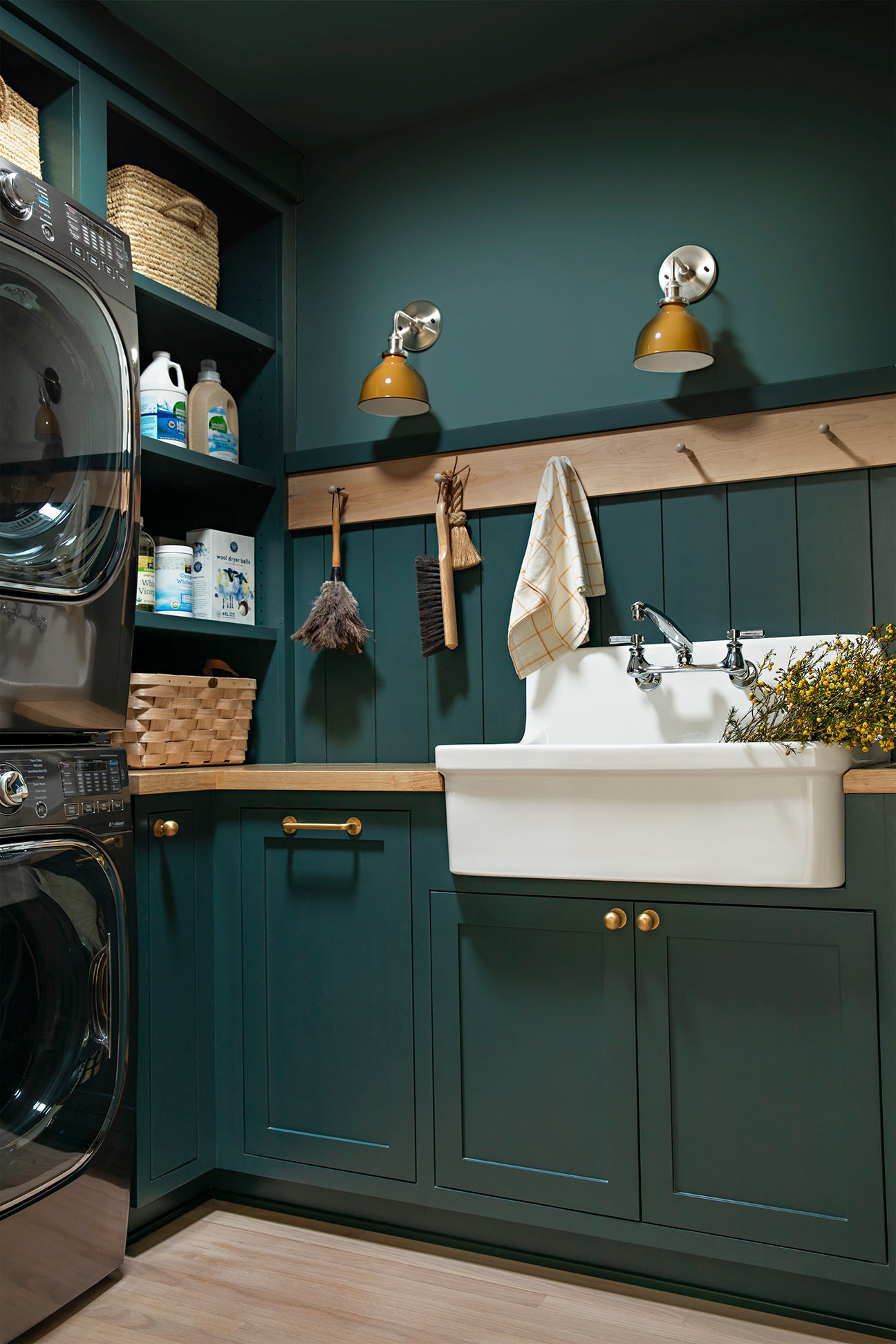 The laundry space—which, thanks to Olsen is no longer part of the original master bath—is a workhorse of a room, outfitted with a mix of shelves, built-in cabinets, and a stretch of peg rails. Despite its utility, Clasen had a whimsical vision for the nook: “I wanted it to feel like a little store you would find in Denmark.” Cue the mustard yellow industrial sconces, accent paneling, and almost-black green paint. The designer dialed up the moodiness by swathing the ceiling in the same color, visually bridging the gap between two faraway port towns. Chores? What chores?

More Renovation Projects: Why Our $250K House Restoration Budget Nearly Doubled by the End My First-Ever Kitchen Gut Reno Involved Some Serious Salvaging We Saved $3,000 on Pantry Cabinets All Thanks to This Unexpected Mistake