The Cabinet Color for Our $2.4K Kitchen Reno Was Inspired by Korean Celadon Pottery 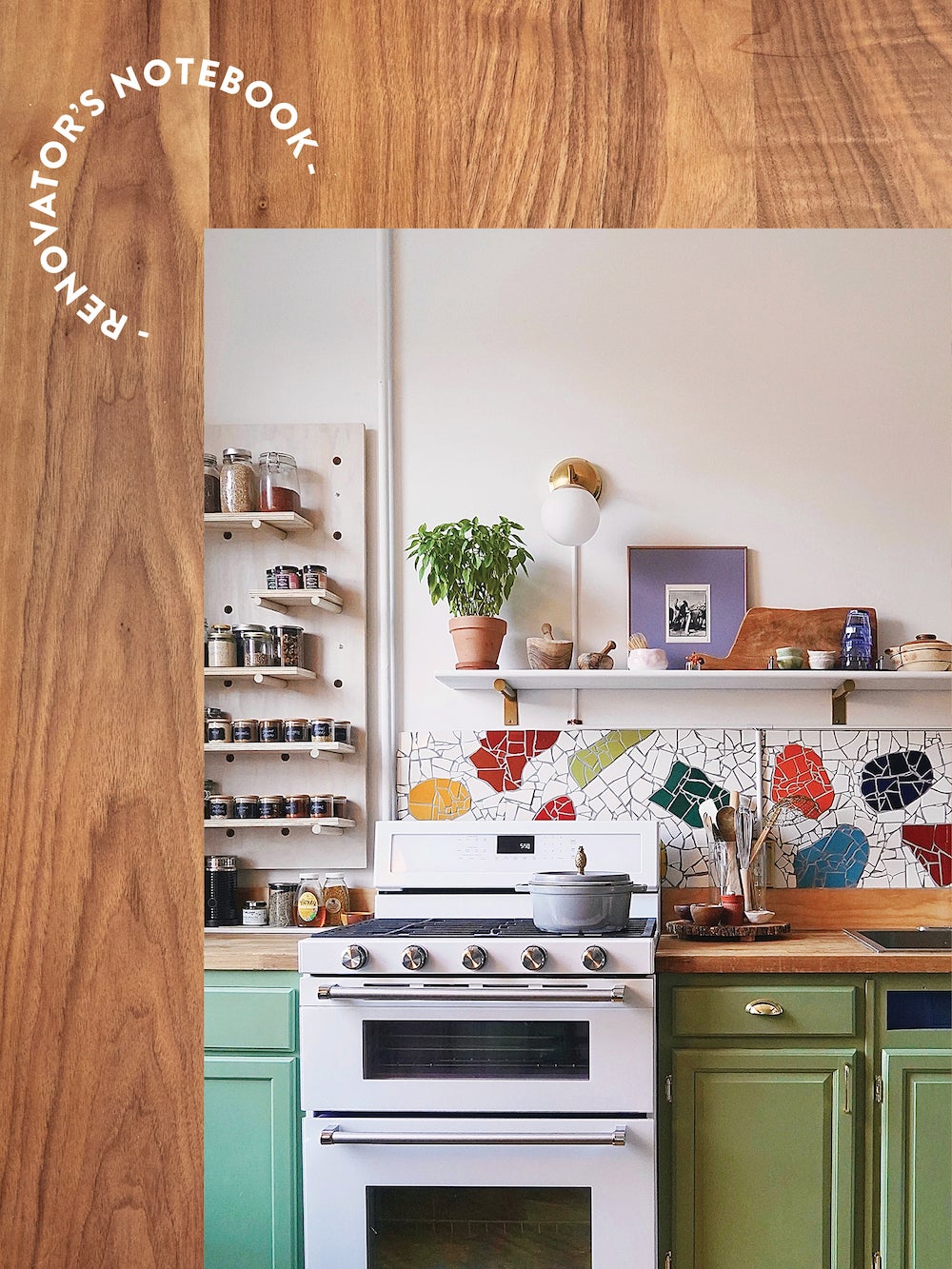 While sitting down for another night of air-fried chicken nuggets amid their Williamsburg, Brooklyn, kitchen renovation, Christine Han and her fiancé, Joon, had an aha moment when they opened their favorite bottle of wine, Pseudónimo. “I was looking at the funky geometric design on the label and thought, why don’t we use this for the backsplash?” recalls Han, who works in tech and runs a food blog called Dear Saturdays. It also happened that some of the colors of the playful shapes reminded her of the 1988 Seoul Olympics flag.

“As a Korean American, I’ve really had more of an American experience, and I just recently started gaining increased interest in learning about my cultural background and history,” notes Han. Shades of green and brass commonly used on celadon pottery inspired the color of the cabinets. “It’s just an inspiring color to be around, and it represents something that’s special to us,” she adds.

Drawing on personal experience was just the starting point for their rental remodel, which the pair tackled on nights and weekends (Joon works full-time as a corporate attorney). Han’s biggest qualm was with the white, crusty, coil-topped oven that wasn’t suitable for baking anything. “I couldn’t get myself to even touch it,” she says, laughing. The sink was in a similar rusted condition. But these are the types of problems that are hard to make out when you tour an apartment via FaceTime (Han was in California when they decided to sign a new lease). Smaller eyesores included odd hacks left behind by the previous renters, like a dresser they repurposed as an upper kitchen cabinet. With the landlord’s permission, Han sought to update the place to make it feel more like them within an estimated budget of $1,600. Their actual all-in cost? $2,400.

Ahead, in her own words, Han takes us through the great and the gritty of the two-month-long reno.

When we asked our landlord to replace the oven, he just offered to have someone come in and clean it. So instead we stored the old one in the basement and got a new one, which we can sell or take with us when we move out. I found a $900 KitchenAid gas oven on Facebook Marketplace for a fraction of the original price ($2,000).

I asked the TaskRabbit tech who came to mount our TV if he knew anyone with a big enough car to transport an oven from the middle of Brooklyn to this apartment. He called up a few friends and found someone with a vehicle who could do it for $200. These are the logistical challenges of living in a city: When you don’t have your own car or truck or the manpower, you have to find helpful people.

Save: Mosaic With Meaning 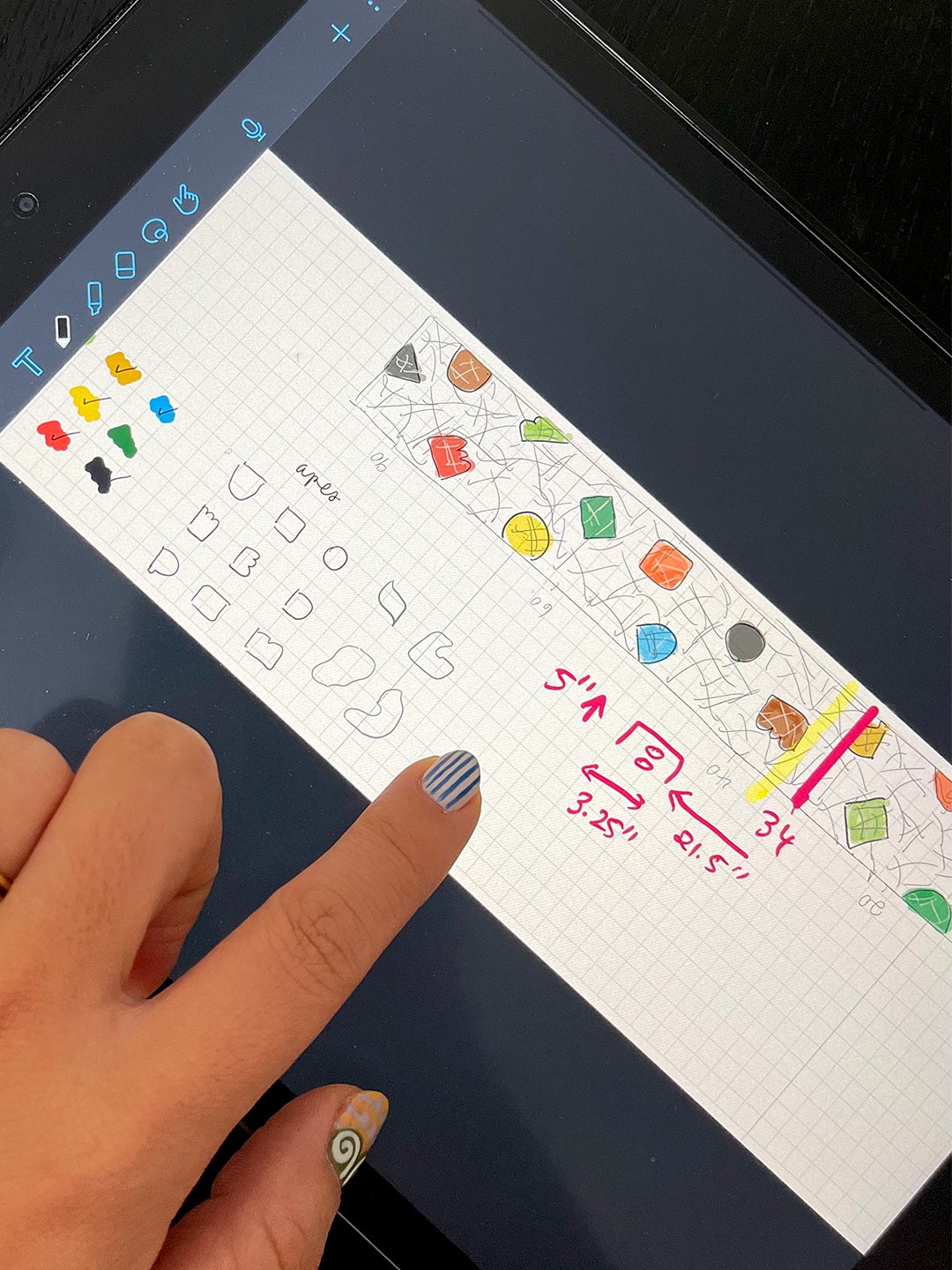 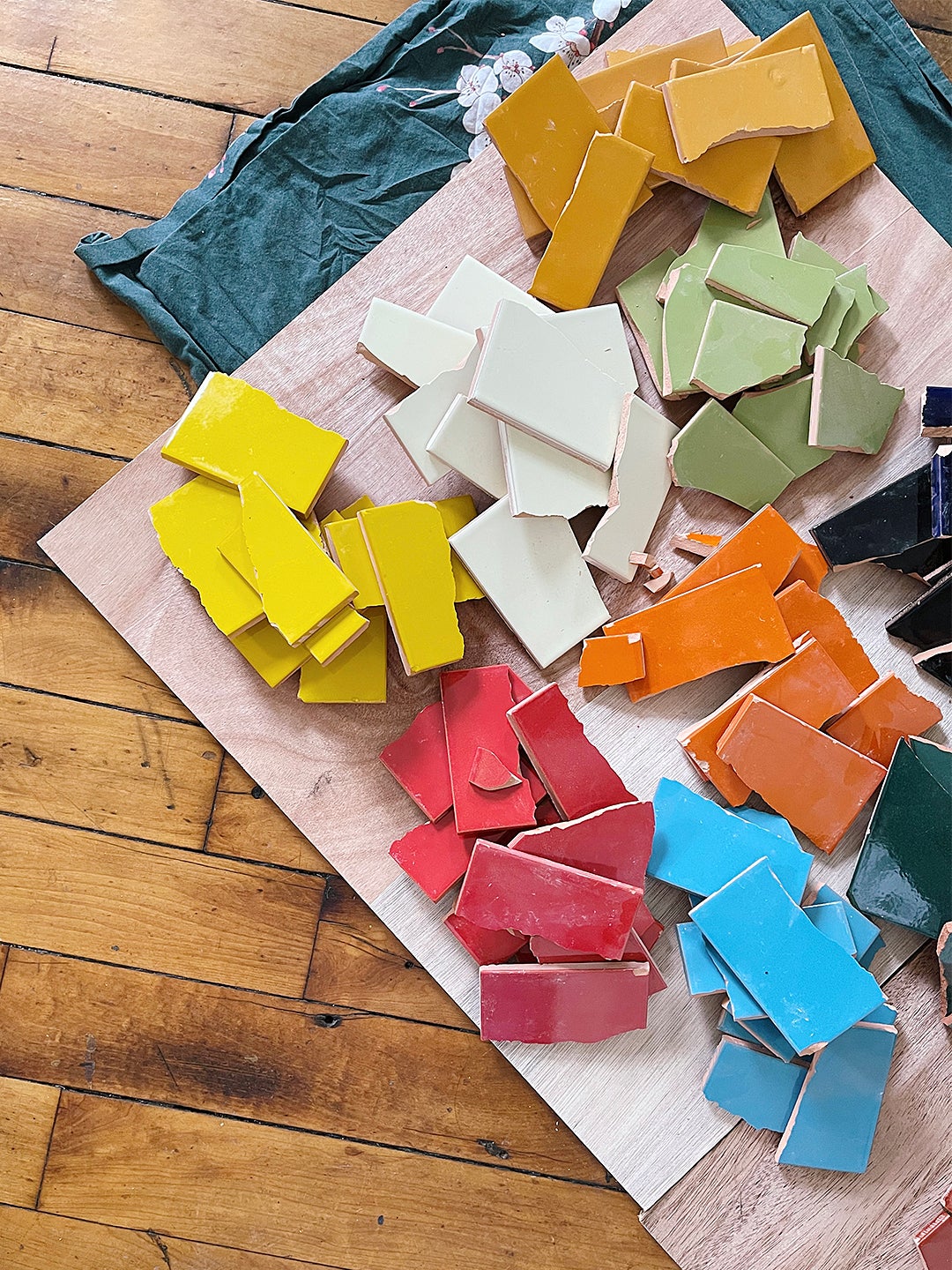 Because we wanted organic shapes for the backsplash, we ordered broken tile pieces through a supplier on Houzz, plus plain cream tiles that we turned into shards ourselves. Joon designed the plan on his iPad, adding a personal touch to the shapes that we saw on the wine bottle.

We sketched out the silhouettes on a mesh surface that has an adhesive film on it, so when we placed the offcuts on them, they stuck. Then we placed the sheets on the wall and secured them before adding grout. The Seoul Olympics was really a representation of economic power and Korea’s effort to be recognized on the international stage. It’s a pretty significant moment that we wanted to represent. All the tools and materials for the reno totaled $1,150.

Save: A Clean Place to Hand-Wash Dishes

Joon and I got into some disputes about how much money we were putting into this apartment, so I really worked on keeping the costs down and scoured Craigslist for a sink—this one came in at $150 and was basically brand-new (it was originally $400). I got the faucet on Amazon for $35.

I always hoped that one day I would have a pegboard wall like Julia Child. As a result of the food blog, we’ve accumulated so many pantry items and spices. We bought a plywood board at Home Depot and stained it a white-gray, because I wanted more of a finished look compared to the raw surface. With a large drill bit, we cut out holes for pegs and trimmed the shelving planks to size. Mounting it was a scary process: I went to the hardware store and bought special anchor brackets that can support 50 pounds; that way it won’t rip out of the wall.

Celadon was a style of pottery that was refined during the Koryo Dynasty, referred to as the Age of Enlightenment for Korea. It became widely recognized as a representation of Korean excellence and craftsmanship. I wanted to incorporate the color beyond the items we already own (we have a really special liquor bottle that Joon’s dad mailed to us, as well as other vessels scattered throughout the apartment). I stripped the existing dark blue paint off the cabinets using a goo-like product called Citris Strip. Then after the detached doors were all sanded and primed, I covered everything in Cactus Shadow by Valspar using a spray gun we bought at Lowe’s (it made the process a lot easier).

There definitely were moments when we questioned what we got ourselves into (I blame the paint fumes!), but we now call this home. It brings us extra joy knowing that it’s one we built together.