This Rental Kitchen Reno Took Just 3 Weeks to Pull Off

Truth: There were a lot of Iate nights involved. 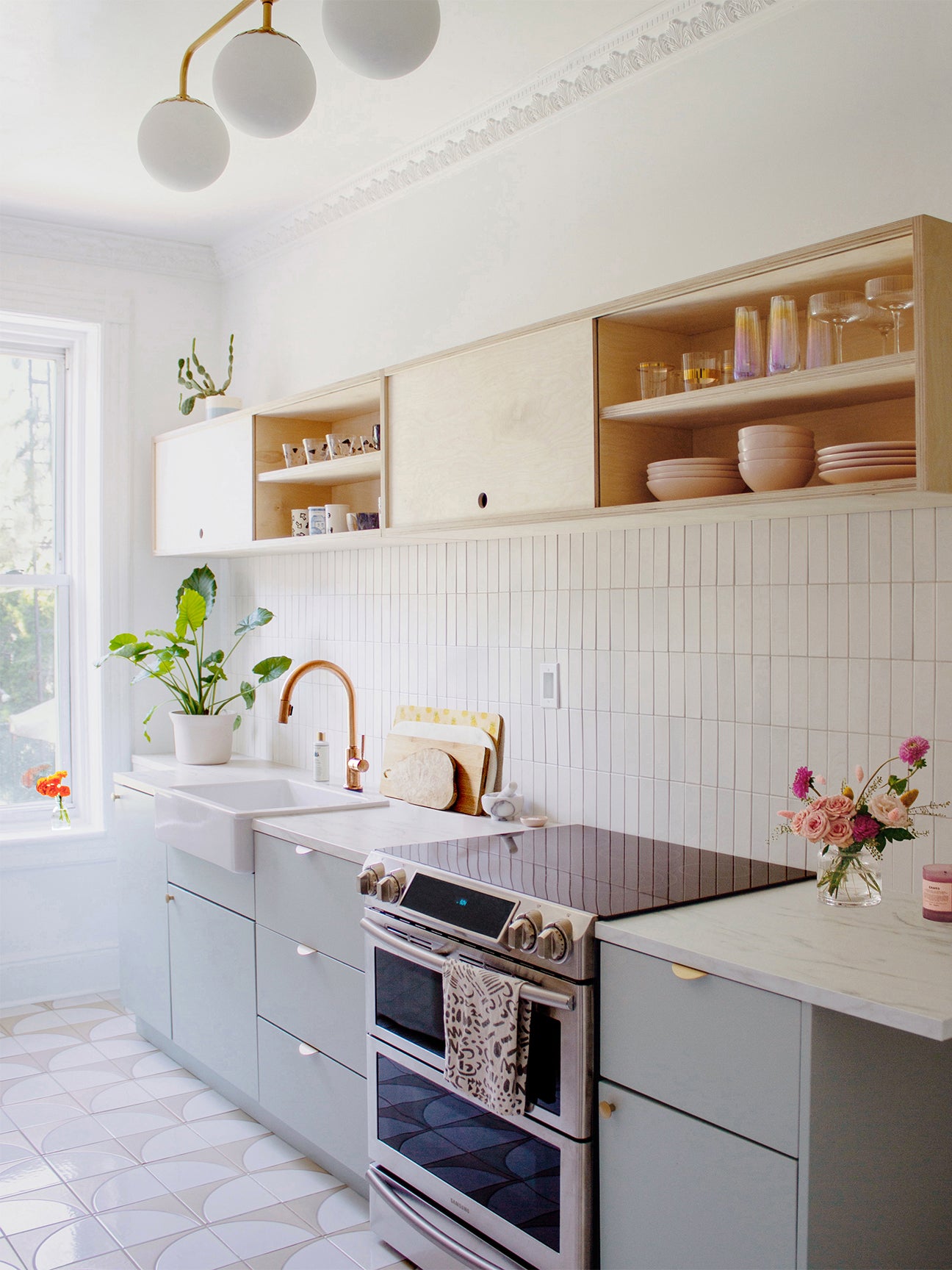 Mallory Fletchall hid her kitchen for four years. But as someone who posts photos of her home for a living (she runs the popular home decor Instagram account @reserve_home), you can only imagine the number of messages she received every day from followers asking about the mystery room. “A lot of Photoshop would have been required,” says the Brooklyn-based creative. The reason Mallory and her fiancé, David, waited so long to upgrade their dated ’90s galley was simple: They’re renters. “If we were going to do anything, our landlords had to trust us,” she says.

When the couple got the green light, they decided to move quickly. After much YouTube watching and gathering intel from construction-savvy friends, they transformed the space in just three and half weeks. “We didn’t have a social life for that entire month,” Mallory says, laughing. Pressed for time (the couple had family coming to stay with them), the living room and bedroom effectively became their pantry while they went to work. From the hand-painted floor tiles (which they painstakingly installed themselves!) to the IKEA cabinets and faux marble counters (another brilliant DIY), Mallory shares the dos and don’ts of reimagining a rental.

Do: Present a Nearly Perfect Plan

Mallory and David got lucky with trusting landlords, but it still took them nearly five years to pop the question. Mallory put out feelers first: What would they think of a remodel? When she got a positive response, she put together a formal proposal that included a cost breakdown, inspiration images, and samples of materials they were planning to use. “They saw it as we did: a great investment for the building,” recalls Mallory. So the landlords agreed to help in any way they could, meaning they covered most of the expenses. It also worked to their benefit that they had no plans to knock down walls or put in a new gas line (two things that would have required them to seek permits).

“If we were going to do anything, our landlords had to trust us.”

Do: Mix Up the Cabinetry

In addition to scrapping the green laminate counters and blue vinyl flooring, the couple demolished the cabinetry. Mallory sourced the lower base from IKEA and added Semihandmade’s Agave Supermatte doors with brass handles for a custom touch. She assembled the whole thing in the living room, while David went to work on the floor tiles. “I could do it in my sleep at this point,” she says. Instead of replicating the same cabinets up top, she opted for flex open shelving with sliding plywood doors by local studio GLAM. “I was concerned we would lose storage space, but because the arrangement is smarter now, we actually have more room,” says Mallory.

Do: Simplify Your Checklist

Understandably, Mallory and David were the most nervous about installing the floor tiles on their own. To prepare, they consulted with architect friends and watched a ton of YouTube videos on best practices. An important tip she learned off the bat: Buy premixed adhesive and grout. “It cuts out an additional step, and you don’t have to worry about getting the consistency right,” explains Mallory, noting it’s also crucial to order 10 to 15 percent more product than you think you need in case any pieces arrive damaged or crack down the road.

Using Fireclay’s hand-painted Fallow tile, the pair did a test run first in a corner they knew they could cover up if it didn’t go well. The layout was straightforward from there, but the work, Mallory admits, was grueling. “It’s not fun to be on your knees for that long,” she says.

“A traditional white subway tile would have faded into the background.”

Don’t: Compromise on a Pet Peeve

The exhaust hood in the old kitchen was easily Mallory’s least favorite feature. “We only used it when we needed the light,” she says. Because the room is small and there’s a window in the galley, she felt comfortable getting rid of the fan altogether. To accommodate the change, she raised the backsplash 30 inches (double what the standard is) so it was safe to cook. “A traditional white subway tile would have faded into the background. These 2-by-6-inch ones have texture and presence,” says Mallory of Fireclay’s Feldspar option.

Mallory replaced the old, sad green laminate counters with—drumroll, please—laminate. The couple bought a 96-inch-long slab of IKEA’s marble-effect countertop. The thought of spending thousands of dollars on the real deal didn’t make sense in the long run (this might not be their forever home). The surface looks like real stone, and it’s super-easy to maintain. Luckily, David, who’s an artist, already owned a chop saw, so making the right adjustments to fit around the IKEA sink was easy.

“The slab comes with glue-on strips for the edges so the cuts look seamless,” says Mallory. She mounted one of the excess cutoffs onto two heavy-duty brackets from Home Depot to make an eat-in breakfast bar. They used another extra piece to create an overhang on the far end of the stove-side of the room.

Do: Decorate With Greenery

Mallory has quite the crew of fast-growing pothos plants, but she’s also on the hunt for another elephant ear (the one she has now is the perfect nook filler). “I just let them do their thing,” says Mallory. The trailing plants thrive off the natural light in the room, but no one seems to love the finished space more than their cat, Kiki.

See more stories like this:  The Kitchen Trend Nate Berkus Says Will Never Go Out of Style This Green Kitchen Ended Up Smaller Than Where It Started Can You Spot the Optical Illusion in This Mint Green Kitchen?