Getting rid of the glass shower door helped, too. 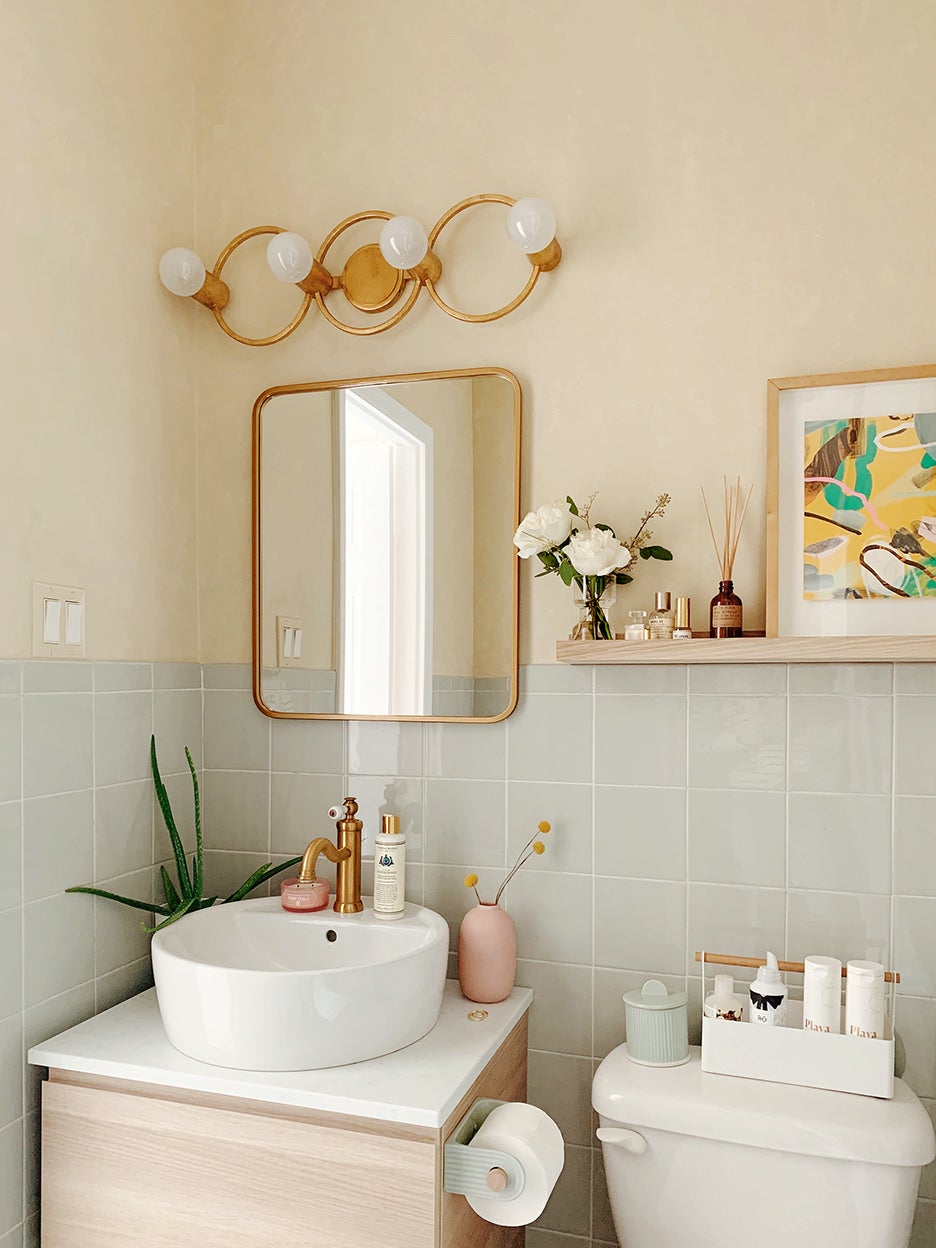 Reserve Home founder Mallory Fletchall’s Brooklyn apartment is the epitome of modern. Her once laminate-clad kitchen boasts breezy blue-green cabinetry and hand-painted floor tiles, while in the living room plush velvet furniture and a chandelier with smart bulbs fill every corner with color. But for the longest time, the bathroom was from a much different era. “It was very ’90s,” recalls Fletchall. The sliding-glass shower door had floral etchings, and the bulky medicine cabinet and vanity light made the small room feel claustrophobic. “It was far from the sanctuary where I could enjoy a bath at the end of the day,” she says.

Since moving into their rental five years ago, the only change Fletchall and her husband, David, made to the bathroom was adding some over-the-toilet storage, but looking back she says it made the space appear more cluttered. “The wall tile was the only bit that we didn’t dislike, but it was hard to appreciate it fully with the dingy shower door,” she explains. During the early months of quarantine, they found the time to chip away at the space (they have a very trusting landlord), addressing everything from the minuscule cabinet to the bland wall color.

Hide Things Away in Deep Drawers

The couple’s original vanity was essentially just a large cabinet, so keeping the clutter to a minimum inside was tough. Fletchall scrapped the entire structure for a cabinet box with two deep drawers, a faux marble countertop, and a vessel sink (all of which adds up to around $295 from IKEA). When they put together the new vanity, the pair also bought dividers and organizers that the company designed specifically for the slim cupboard. “I filled up the top drawer with all of my skin-care, hair, and makeup products,” says Fletchall. “David is thrilled to have that stuff tucked away.”

Once the vanity was installed, the couple realized they had enough storage and didn’t require a clunky medicine cabinet. Fletchall replaced the old ugly box with a mirror to make the room appear larger and swapped out the old light for a brass piece from Mitzi. She also got rid of the awkward over-the-toilet shelving unit and mounted a shallow picture ledge to display her perfume collection and a framed painting. “The raised front keeps the fragile glass bottles safe,” she says.

Open Up the Shower in an Instant

Not a fan of the dated shower door design, Fletchall decided to do away with the feature altogether—not replace it with another glass barrier. “It made that area feel very enclosed and, worst of all, it was prone to soap scum,” she says. Taking it off only required removing some screws and giving the perimeter of the shower a good scrub-down. As with the old vanity, the couple stored the door in their building’s basement just in case the owner ever wants to reinstall it.

Now a soft green linen curtain (a Target score) hangs from a rod they picked up at IKEA a few years back. “We have them in almost every room of our apartment because we love the simple design,” says Fletchall.

Warm Up the Walls

Changing the white walls to beige (Fletchall went with Palo Santo from Backdrop) made the room feel cozier and, surprisingly, the existing square green tiles look more modern. “I never really noticed them much before this makeover, but when we started ripping out the vanity, medicine cabinet, and shower door, I realized how much I love the color and the minimal (and peaceful) look it created all on its own,” says Fletchall. All it took were a few tweaks to uncover the hidden potential.