Every Room in This São Paulo Home Is a Different Color

Starting with a neon coral kitchen. 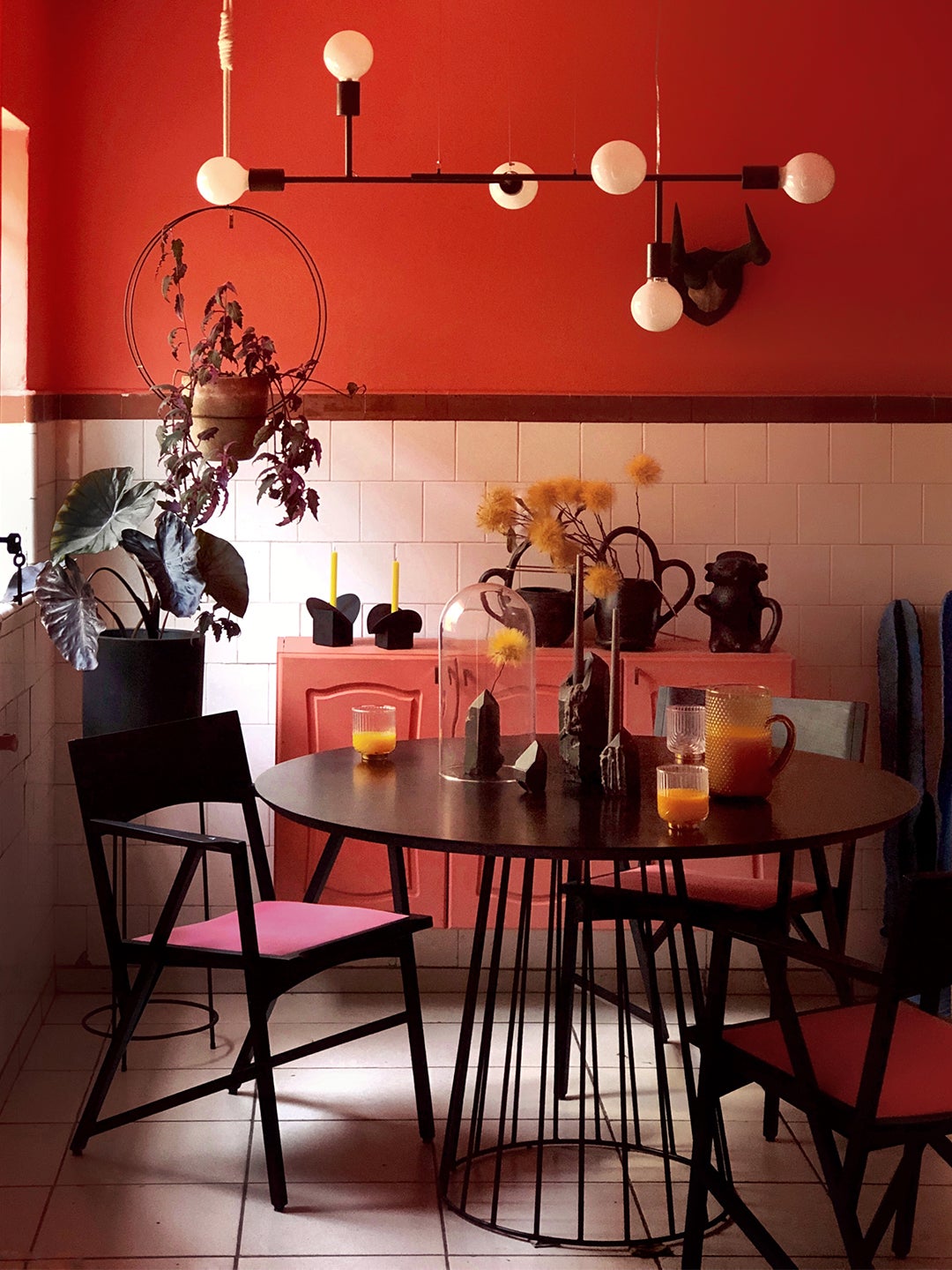 Come spring, who isn’t craving major color? With our latest issue on newsstands, we’re celebrating all things bright and bold with Color Month on Domino. Check back daily and sign up for our newsletter to see vibrant spaces, palettes that pop, weekend paint projects, and more. Let’s get chromatic.

Michell Lott got his first design gig at around age 5. “I remember helping my parents choose paint colors—no white walls, even then,” says the creative director and former Casa Vogue Brasil editor. They picked pale mint for the bedrooms and mustard yellow for the living room; when he was a teenager, he helped redo the whole house once more, this time in a lime green. “I’m not proud of it,” he jokes.

Fast-forward to now, and Lott’s latest project is equally personal. For the past eight years, he’s been living in São Paulo, in a home affectionately dubbed casinha cósmica (“cosmic house”). He’s cycled through plenty of roommates over time, but his love of color has remained a constant. Every room is a different hue, the palette changes at least once a year, and—above all—there is still a ban on white walls.

When he first moved in, it was a pretty common postgrad space, full of basic and inexpensive furniture. It wasn’t until he and the original three roommates spontaneously decided to coat the kitchen in a deep shade of turquoise that the home’s color story really began. From there, Lott bought some bright yellow accessories and painted the fridge a matching shade of citron. The property has been in flux ever since.

Lott currently lives in the 1,076-square-foot space with his boyfriend, model-singer Felipe Rocha, and their friend Julia Mello, an artist and tarot expert. It’s a real modern-day artists’ commune, with color at the heart of everything that happens. We chatted with the designer about what it’s really like to live your life in Technicolor—plus the paint rules he swears by.

On His Biggest Risk

After the turquoise had run its course, he picked a bold coral for the kitchen—though it was definitely an accident. “It felt softer in the sample,” remembers Lott. “When it was first painted, it felt too energetic. We hated it. Then five minutes later, we were like, ‘Okay, we think we like it.’” Over the course of the next few months, he fully leaned into the bold look, covering some of the furniture in a fluorescent neon and even dyeing flowers bright blue and purple.

On the Rule to Live By

Lott doesn’t believe in “wrong” colors, but he does believe in carefully choosing shades. Typically he’ll steer clear of anything too bright. “They have too much energy and take all the attention,” explains the designer. Instead he recommends opting for the median-saturated tone on the paint chip, which he says will give you the most flexibility when pulling together a complementary palette.

Lott will first look to Instagram, bookmarking projects by Italian designers like Dimore Studio and Studiopepe, and seeing what up-and-coming creatives from Brazil are up to. Then he will take his search global: The green, red, and terracotta tiles of Morocco, for example, or the once-bright, now-faded little houses of Cariri, Brazil. Right now he’s loving the latest lookbook from Brazilian paint brand Suvinil. “Those are the colors of the sunset and the ocean—everything is very smooth and atmospheric,” he says.

On His Favorite Space

He didn’t pick the color, but the rosé-inspired guest bedroom has ended up stealing the show. “It’s funny, because I was a little over the millennial pinks everyone was using,” says Lott. He played around with the furniture, adding in a mix of dark wood with red and yellow accents to edge it up a little. “Now every time I’m there, I feel like I am in a very calm farmhouse,” he continues. “I love it!”

On His Paint Philosophy

Put simply: Change is a good thing. “There’s no reason to keep living in a landscape designed for someone you’re not,” says the designer. Especially if you’re in a creative field, Lott suggests switching up your surroundings every now and then to feed inspiration. “More than a canvas, this house is my laboratory,” he notes. “It would be weird if someone who does what I do professionally lived in an average house. And of course, I would never want that!”

See more colorful homes we love: There’s Always Room for More Art in This Maximalist Apartment This Concrete Tile Kitchen Is Like a Life-Size, Pastel Rubik’s Cube A 60-Foot-Long Rainbow Rug Captures the Pure Joy of This Maine Home