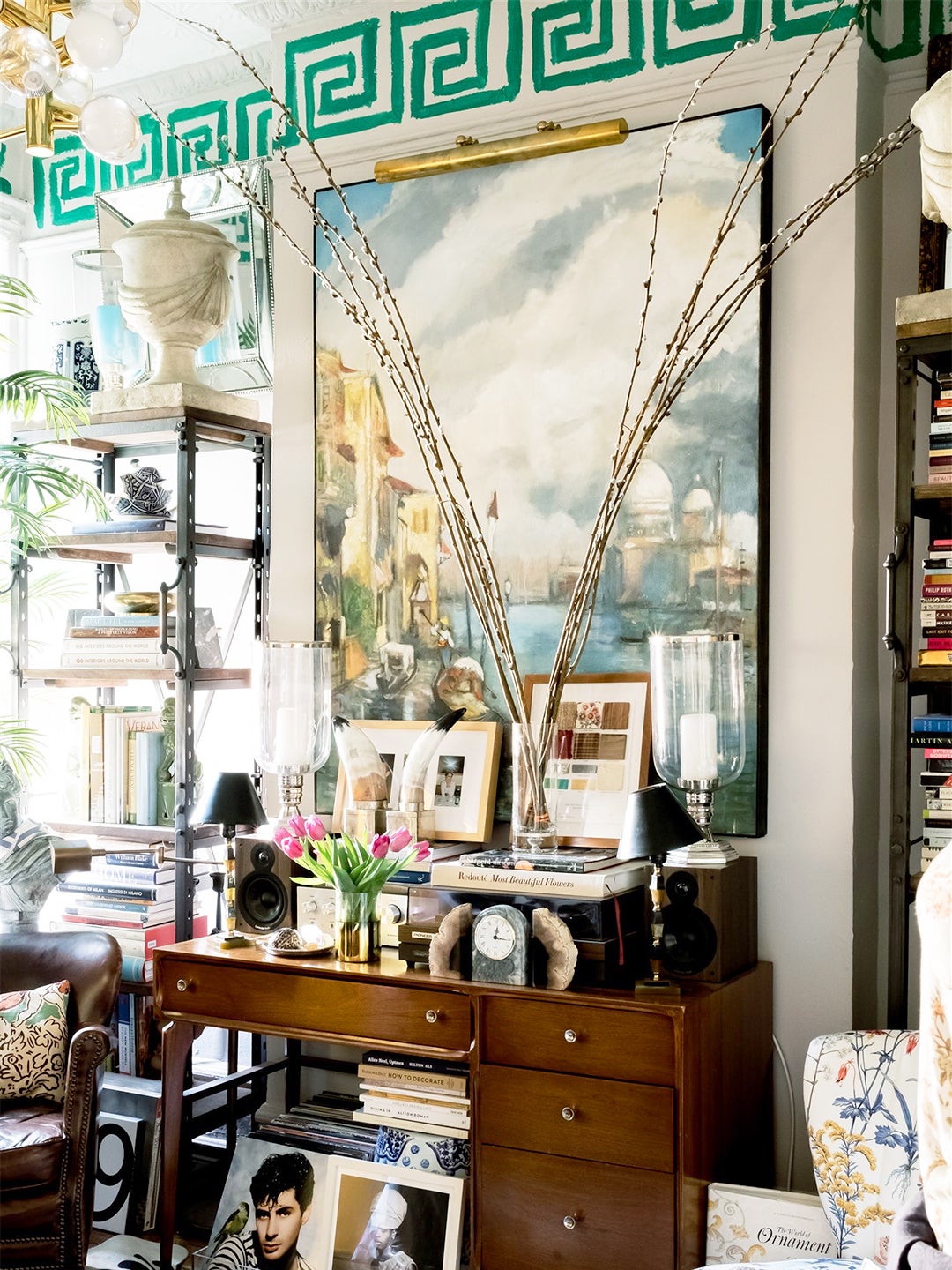 New York–based editor Owen Holmes and his wife, Kate, rent their Crown Heights, Brooklyn, apartment, but that hasn’t limited his DIY efforts. “I wrote off my security deposit a long time ago,” notes Holmes. By day he works for a major publishing house; by night he designs—more specifically, he paints. The couple’s 140-square-foot, treasure-filled living room, which boasts 10-foot-high ceilings, served as his latest canvas. “It was begging for something,” he says.

The area in question is the foot of space between the crown molding and the picture rail. Holmes’s original plan was to line the gap with antique-looking mirrors, but when DIY-ing the patina proved extra-complicated, he abandoned the panels and went back to the drawing board. Taking cues from the traditional egg-and-dart molding in the room, he landed on the Greek key, a mazelike motif one might find on an ancient frieze. “It felt appropriate, but I also liked that it had a rhythm to it,” he explains. Holmes set out on the two-hour-long project on a lazy weekend afternoon, and despite all the objets d’art around him, he wasn’t particularly precious about the process. In fact, he makes the whole thing look effortless.

Pick a Color That References Something Else

Holmes landed on Benjamin Moore’s Emerald Isle for the trim—the same hue he previously used to paint the kitchen cabinets. His thinking: The accent color would create a sense of continuity between the two adjacent rooms. “Even if you don’t realize it, it helps unify the space, especially when things are a bit eclectic or chaotic,” he says.

Work Around Your Stuff

The couple’s apartment has been likened to a museum by numerous friends. “I think some mean it as a compliment and others not so much,” Holmes says, laughing. The space is packed to the max with books and artwork, none of which he felt the need to move out of the way. “I was just very careful,” he notes. The only real prep work involved wiping down the walls to make sure there wasn’t any debris, before gathering his sole supplies: a ladder, leftover paint, and a medium-size brush. “I had a few beers and then I got up there,” he says.

Making mistakes was far from Holmes’s mind as he set out on freehanding the design. The lines aren’t meant to be crisp. “You can definitely spot some drip marks,” he remarks. As he made his way across the wall, he used the ceiling tiles as visual markers for how wide each key should be, that way they would all be even. He didn’t turn back—one coat was enough. “I think it’s important to do something that’s your own; something no one else will have,” he says. As for his relationship with his landlord, Holmes says it’s easier to ask for forgiveness than permission.