Form and function from the Brits. 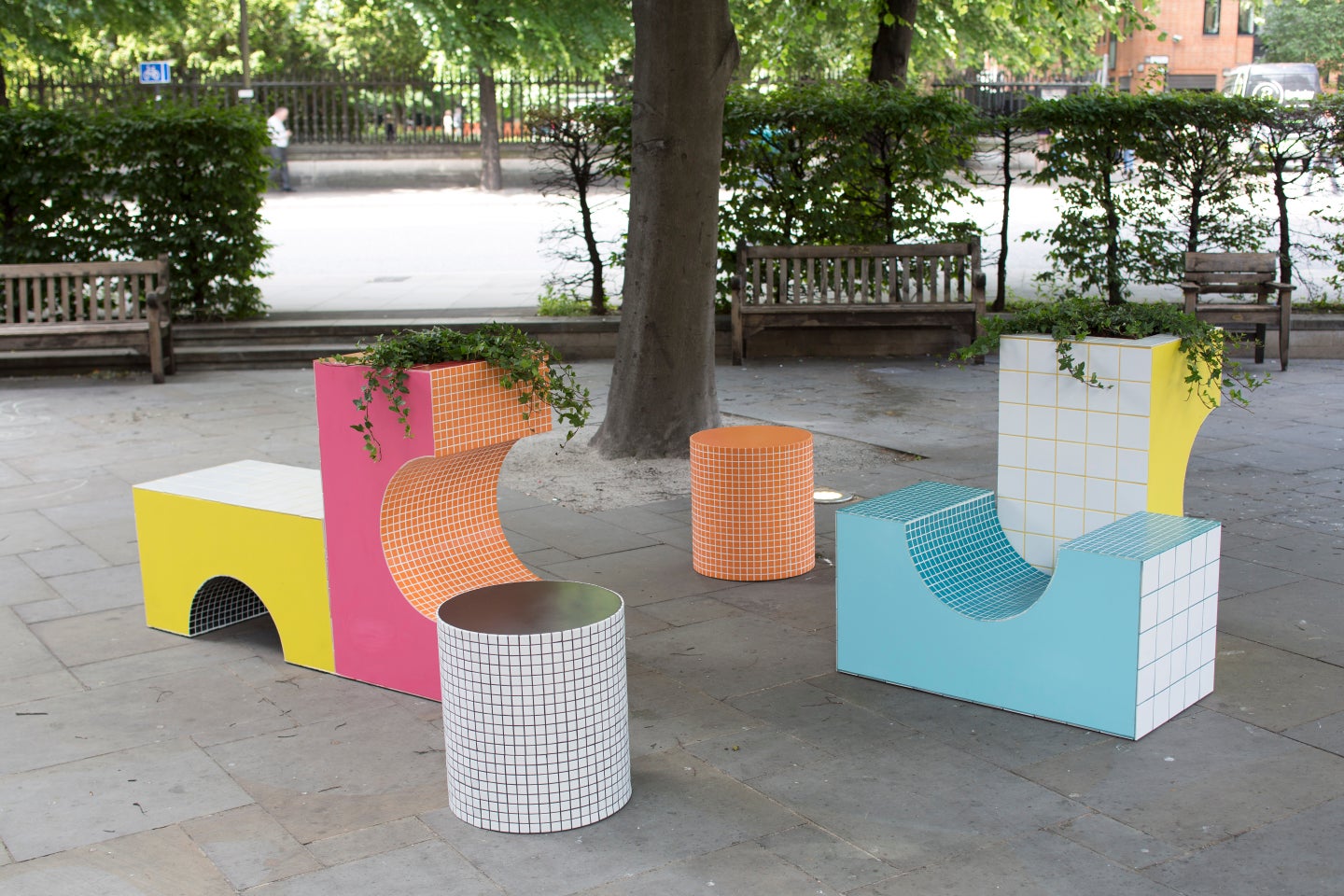 Picture what a public bench looks like. It’s probably crafted from concrete or cheap iron, may contain wads of gum, and is likely somewhere you stop to take a call or tie a shoelace—not quite a cool, sculptural piece of art you might stop to admire.

A recent exhibition on the streets of London proves otherwise. For the annual London Festival of Architecture, its organizers tapped emerging design talent, picking five winners to create “imaginative places for people to rest amid the bustle of their city surroundings.” This manifested itself into a series of sculptural benches, each a far cry from the drab public fixtures we’re accustomed to seeing, and one in particular caught our eye. Astrain Studio Architects’s submission is a series of geometric benches coated in multicolored tiles…and we can’t help but notice a burgeoning trend.

Astrain’s gridded designs bear a striking resemblance to Ikon København’s tiled tables. When we first spotted the style a month ago, it was the tables’ playfulness that drew us in: A contemporary geometric vibe meshed perfectly with an almost childlike whimsy.

The same can be said of Astrain’s London benches. With the addition of a cool new material and unexpected silhouettes, architect Irene Astrain managed to take a generally mundane (and, let’s face it, uninspiring) piece of public furniture and turn it into a piece of public art. The benches offer a moment of repose in the most literal sense, but also a cheerful respite from a busy workday. After all, who wouldn’t want to take their lunch break parked on one of these colorful numbers?

“This seemed to me to be the perfect opportunity to reimagine a bench as not only a place to stop but a place to play, to reconnect with the imagination and the joy of childhood. For that, our city blocks needed to offer a sharp contrast to their London surroundings,” explains Astrain, who cites her upbringing in Spain (where ceramic-tiled benches are hailed as a traditional craft) as a major influence in the design. “They were designed to be clad in colored tiles, grout, and paint, almost as vessels to a parallel fun realm.”

We may not be in London to check out these funky benches in person, but there’s a lot to be said for the broader idea of revamping quotidian public fixtures and turning them into something beautiful—a trend we hope catches on Stateside posthaste. There’s hope yet: If something as ordinary as a parking garage can be transformed into a graphic-printed installation, we’re sure chic public benches won’t be far behind.

See more architecture stories: Pardon Me, But Have You Ever Seen Such a Beautiful Garage? UNESCO Just Declared This City the World Capital of Architecture What Happens When You Renovate a 150-Year-Old Brownstone?