A DIY Wall Treatment Made This Charming Kids’ Room Future-Proof

Cottage whimsy, but make it durable. 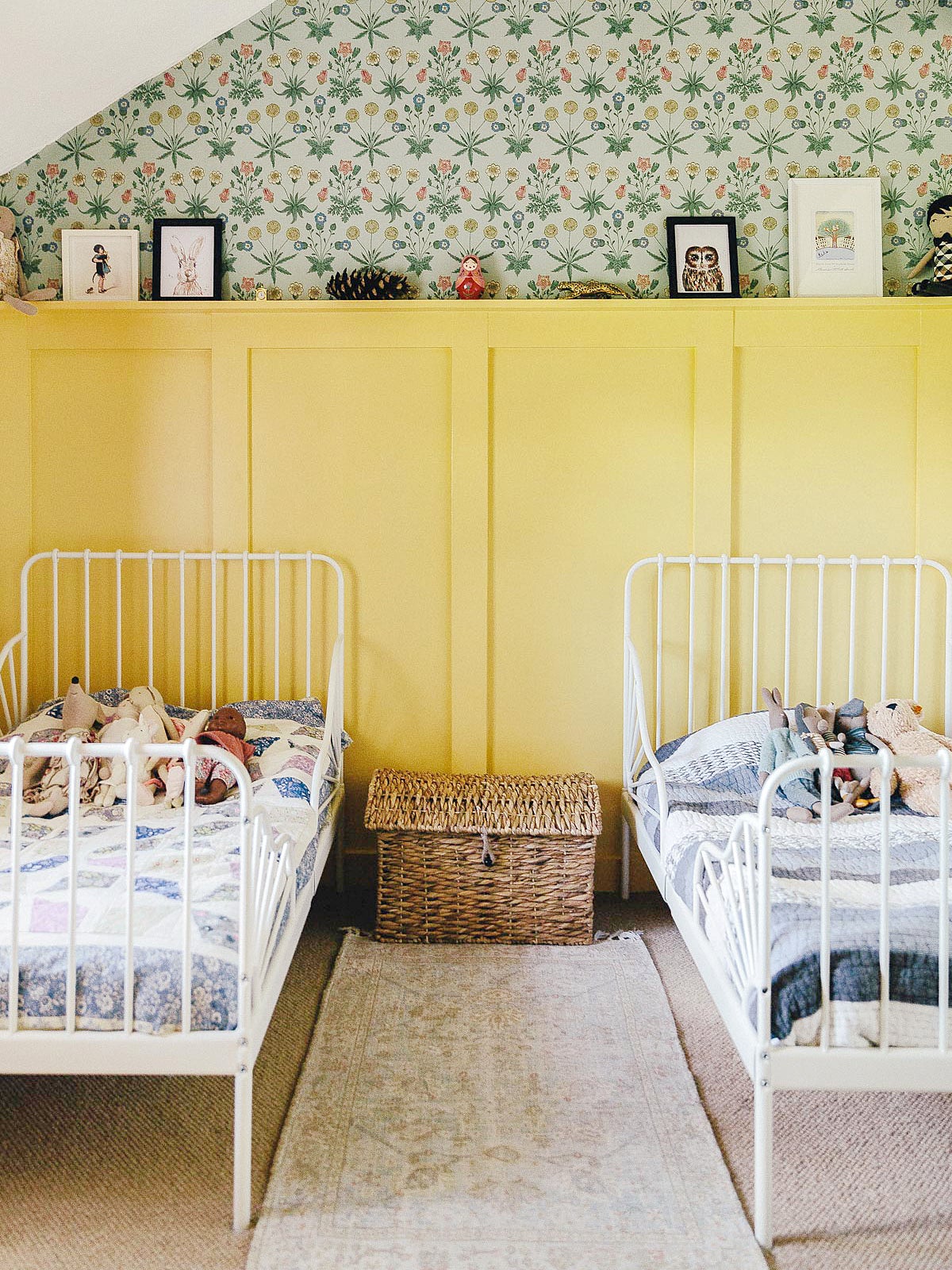 When Mama Sparrow blogger Naomi Wilson and her husband Paul’s 5-year-old daughter and 2-year-old son left the family’s England countryside cottage for a week to stay with their grandparents, the couple didn’t waste a minute: They grabbed their tools, hit the hardware store, and even made an IKEA trip. Their goal? Renovate their children’s then-dreary shared bedroom. “If we were ever going to do it, we had to do it then,” says Wilson.

The timeline proved too tight for all the projects on their to-do list (rather than replaster the textured ceiling, which would take at least four days, they painted it white). So instead the pair brightened the mood with dashes of yellow, cuddly animals, and botanical wallpaper directly inspired by Beatrix Potter’s former home (the one Mr. McGregor’s Garden was modeled after). “It was in a dark room, and it really worked,” she recalls of finding a way to brighten the space. “And then I saw it online and knew we had to get it.” Here, she shares a few more cottage-cool details they brought in, just in the nick of time. 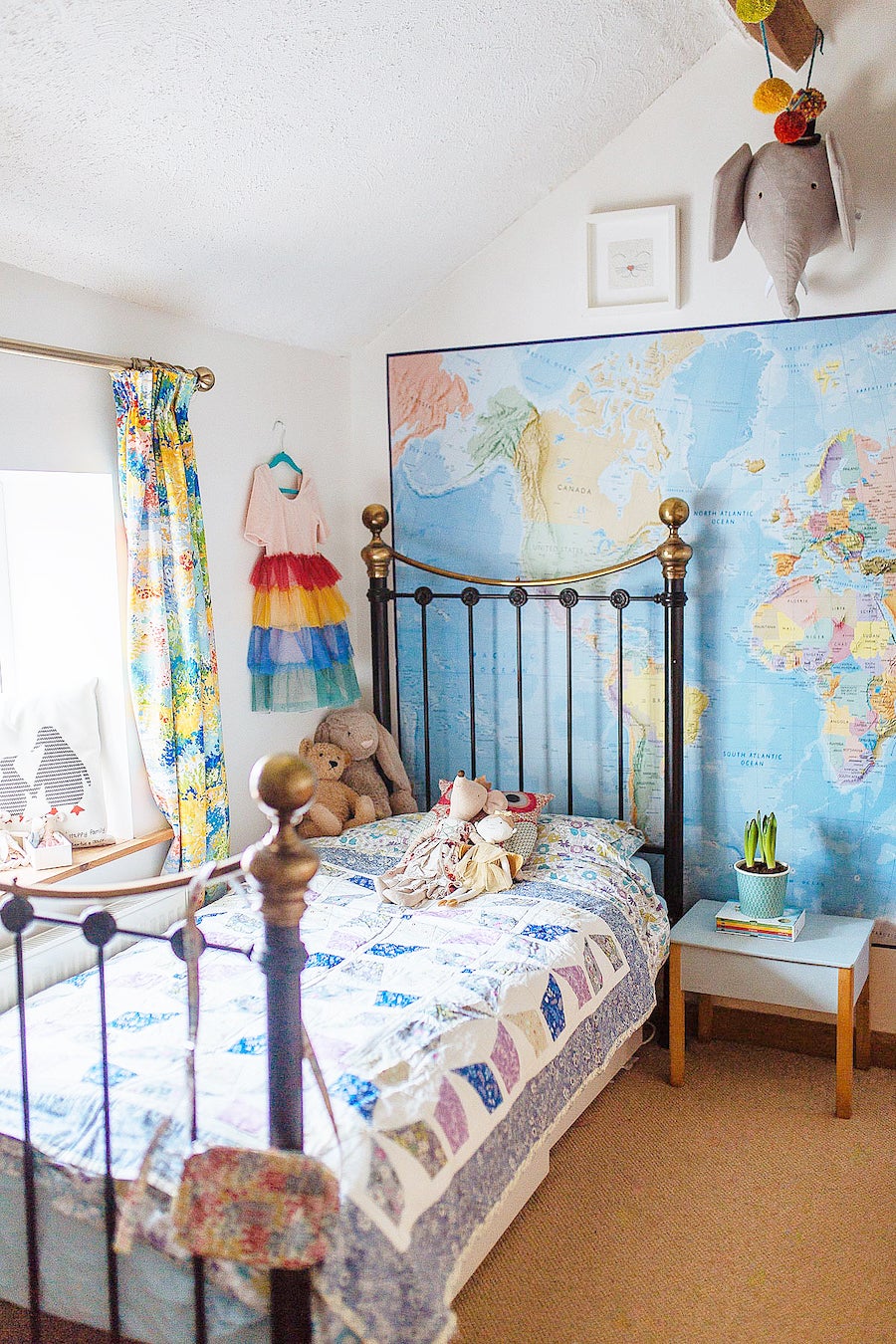 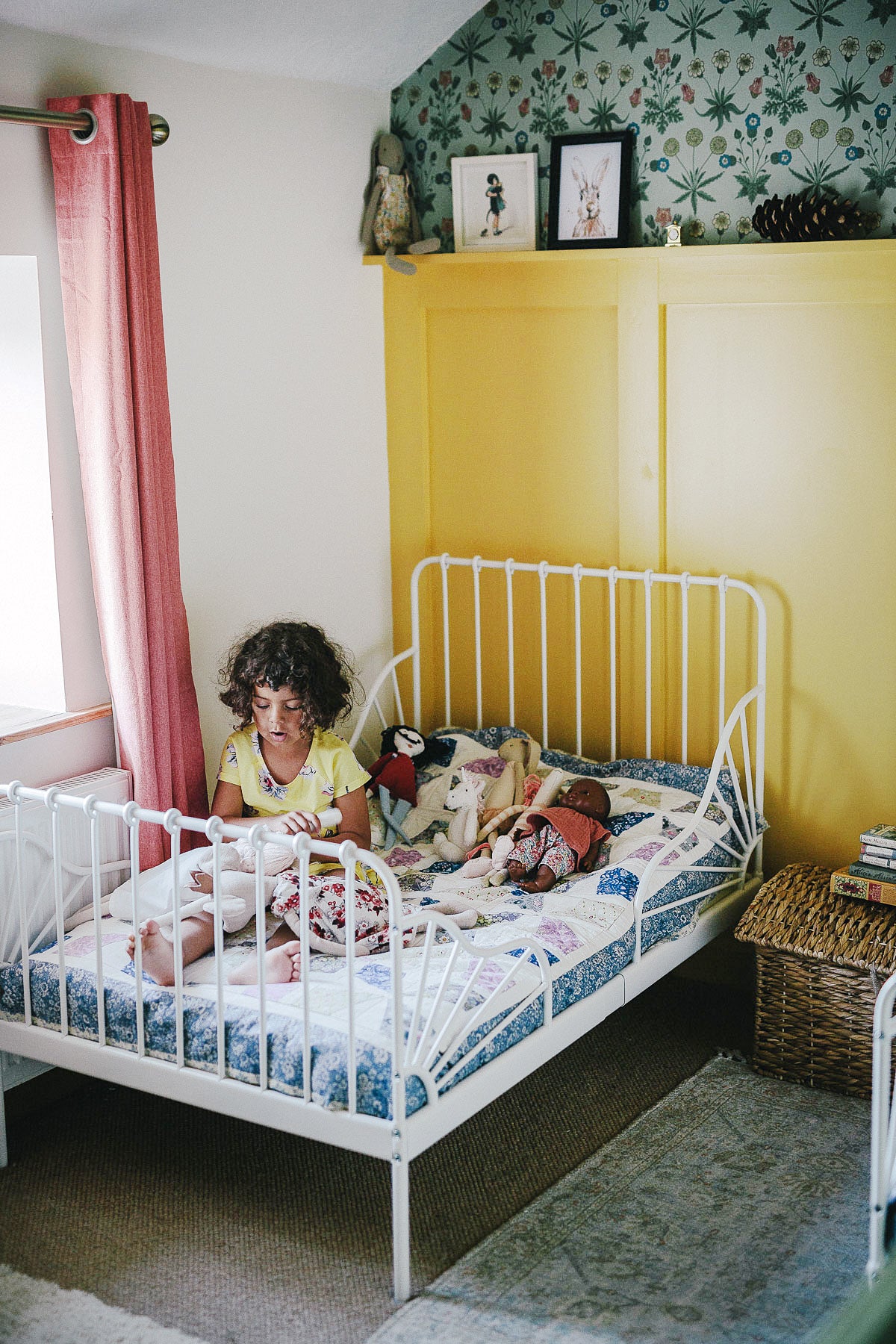 The easy-to-clean board-and-batten paneling complemented the home’s 1824 bones, but more important, it meant the couple’s son couldn’t pick at (or draw on) the new wallpaper—something he had a habit of doing with the previous mural. “We walked in one morning and were, like, where has the map gone?!” says Wilson, laughing.

Before the kids left for their trip, her daughter chose the sunny yellow hue, which Wilson approved: “It helps inject some historic charm back into the space,” she notes. Paul, an engineer, did the actual installation, adding a ledge for displaying found treasures and making the boards high enough so that it will all still look proportional with a full-size bed in there one day.

A Walk on the Wild Side 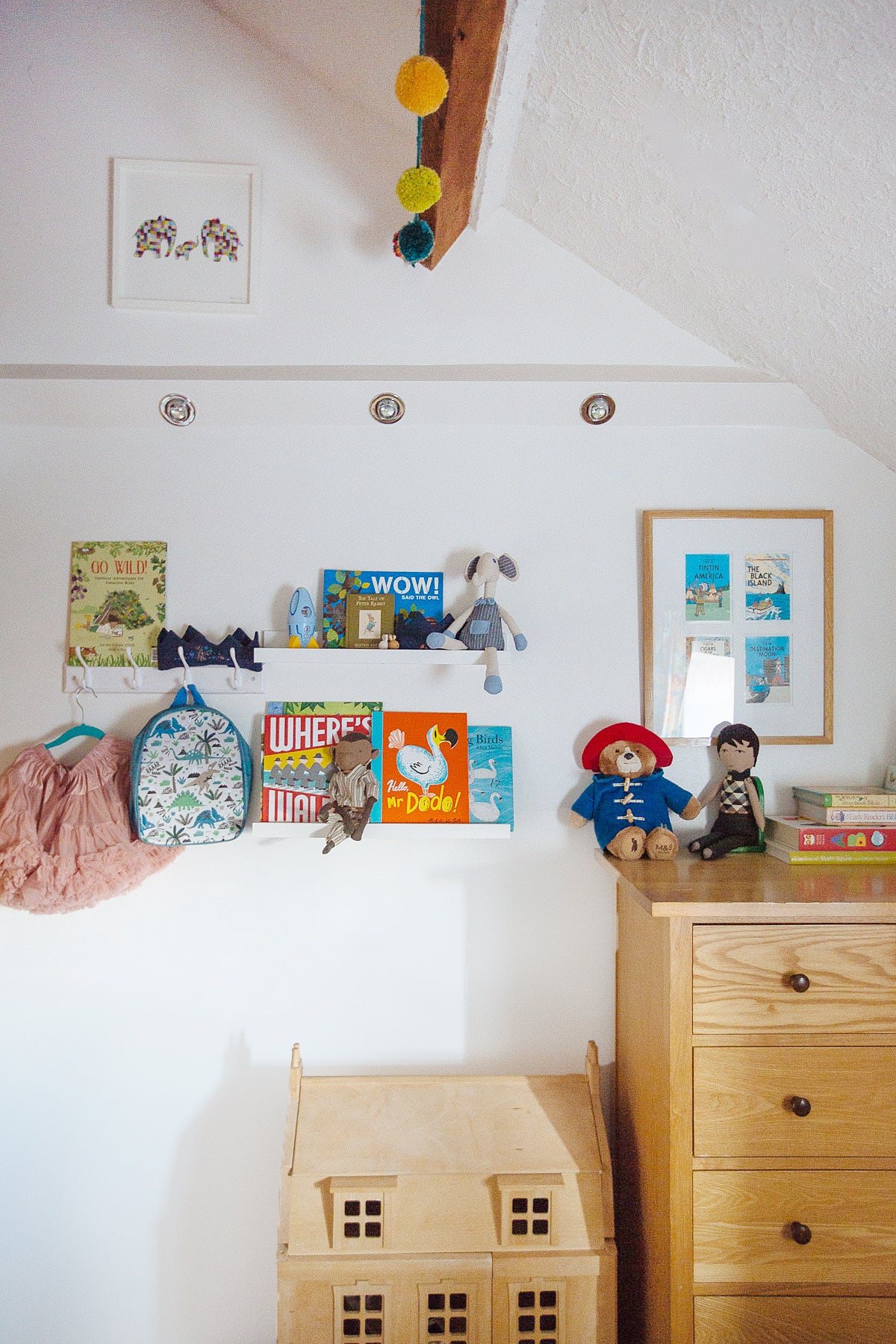 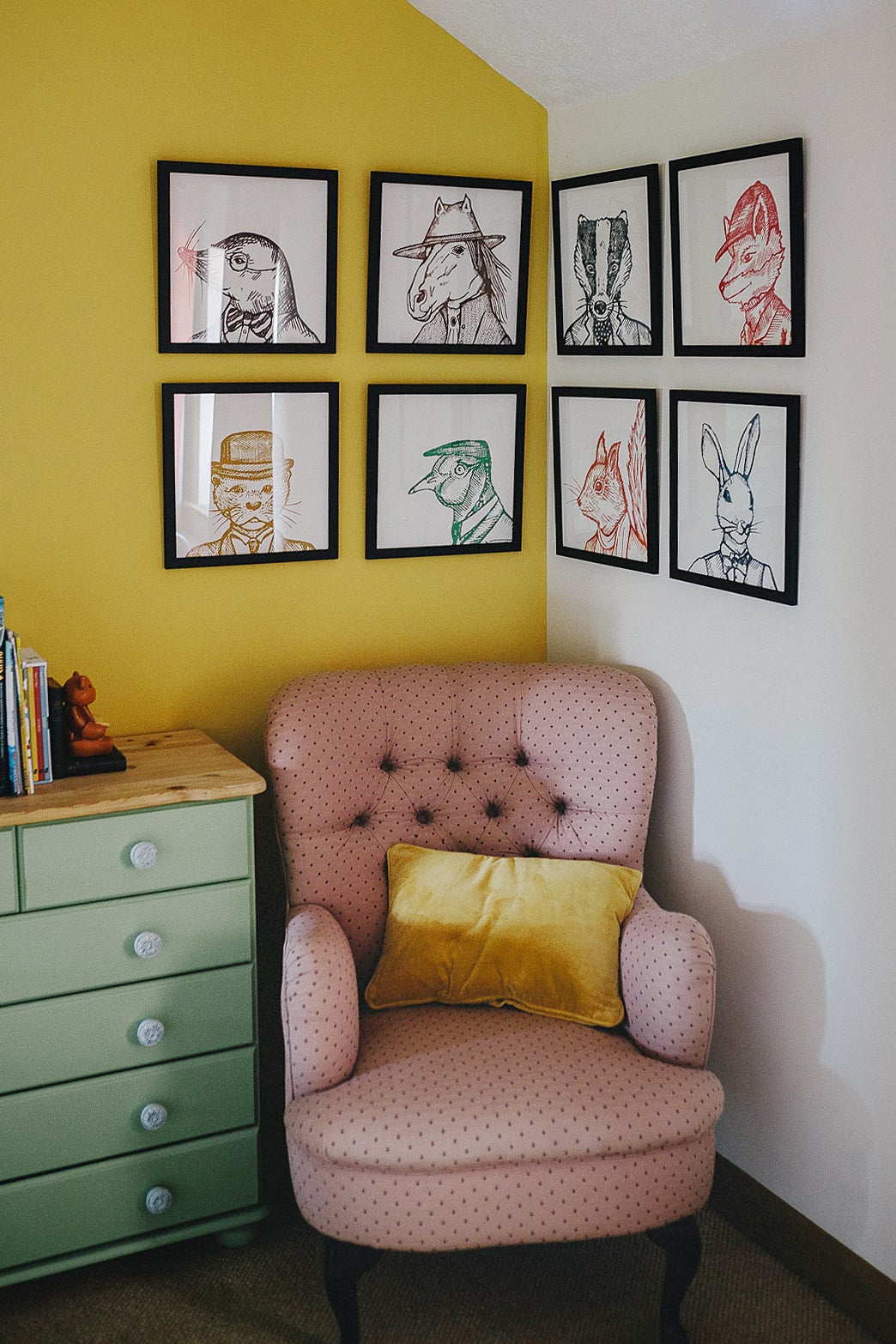 At the core of the reading nook: a comfy pink chair Wilson scored for $40 on Facebook Marketplace. The portraits of animals, created by local artist Jan Jay Design, set the scene for tales filled with friendly woodland characters. “We see pheasants and rabbits outside nearly every day, so I thought it would be nice to bring some of that into their bedroom,” she says. The stuffed animals that dot the beds offer another connection to the garden, but, come bedtime, her youngest likes to swap his bear and rabbit for his airplane.

After hunting everywhere for twin beds, Wilson landed on IKEA’s extendable Minnen option. The little ones also got matching wardrobes—or at least they look somewhat identical now. Wilson painted the two old chests (one’s antique, the other was a run-down Facebook Marketplace find that required a good sanding and coat of varnish) in the same sage hue, color-matched to a green from Edward Bulmer. “The big one is for my daughter because she has a huge wardrobe,” says Wilson with a laugh. Then, because the insides were so worn out, she lined them with leftover wallpaper from the downstairs bathroom.

Plot twist: It was never the original plan for her children to share a space. When the family first moved into the three-bedroom home in December 2019, they each had their own. But when their grandmother came to visit, they bunked together and loved it. “We considered splitting them up again, but they really needed each other during that time,” says Wilson. “Now they can’t bear to be apart.”