Now the bold wallpaper (and an awkward corner) plays nice. 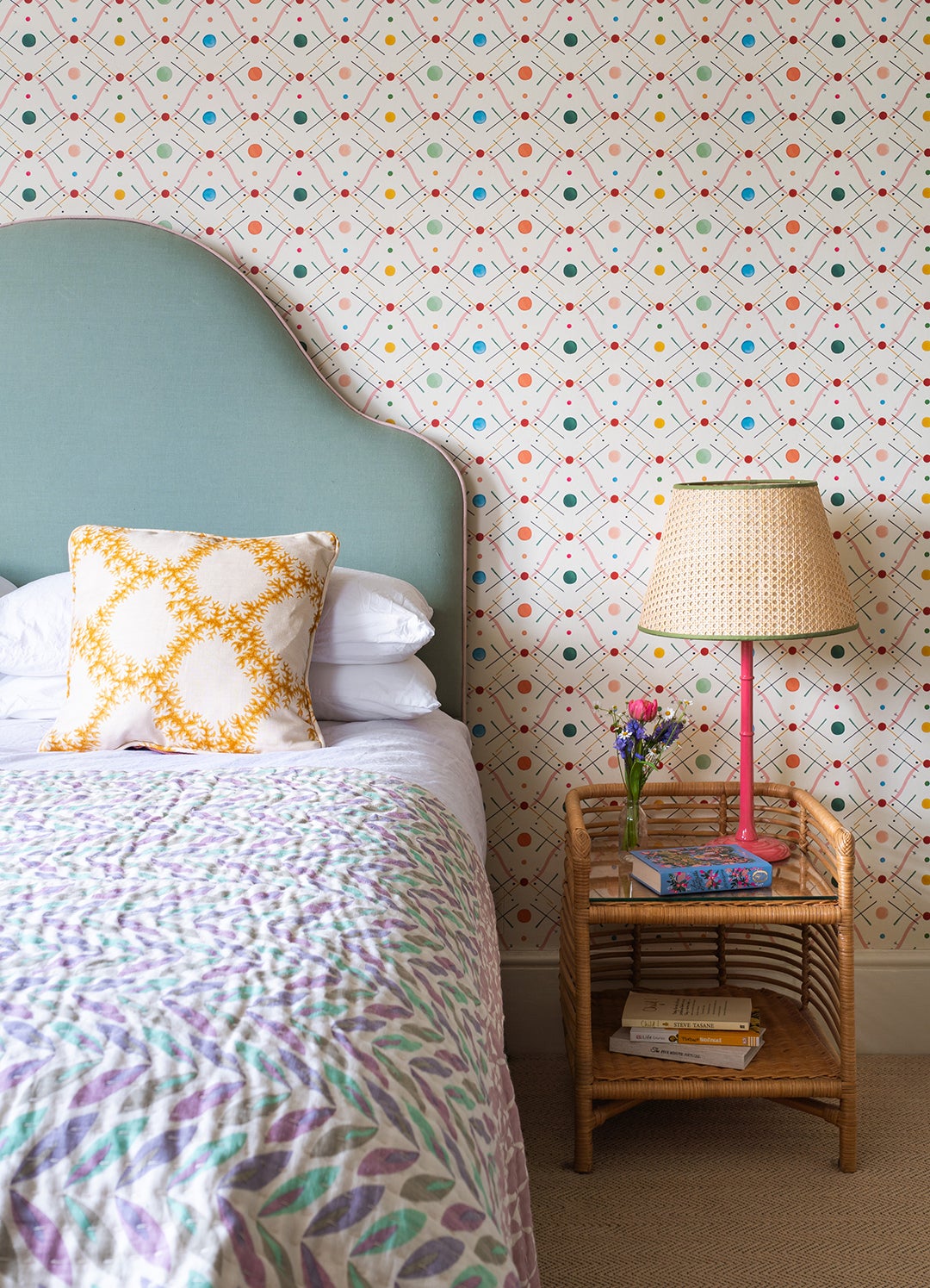 Every parent knows that cutesy wallpaper and kid-size furnishings have a shelf life. So when the eldest of their two daughters turned 13, a creative couple living in northwest London called on designer Kate Guinness to turn her bedroom into a boredom-banishing, teen-friendly retreat. The transformation, however, wasn’t as simple as switching up the color scheme and freeing up wall space for a few boy-band posters; it required an entire layout reconfiguration.

“There were lots of sloped ceilings,” Guinness remembers of the space, an attic that spanned nearly 190 square feet. Its considerable size was diminished by the room’s squat height and nonexistent storage. So the designer started thinking outside the box with the help of assistant Jess Denyer, coming up with abstract solutions that would fill the closet void. After much trial and error, they decided that the wall beneath the “super slope,” as Guinness called it, was the most logical spot for a bespoke double wardrobe by furniture maker Alfred Newall and makeshift shelving system to house books and school supplies. Cher Horowitz’s rotating clothes rack it’s not, but it gets the job done. And by painting the custom shelves in Farrow & Ball’s Inchyra Blue, you can’t even tell they’re MDF. It’s the corner where Denyer pictures the young client getting ready in the morning, doubling as a vanity, and, later, curling up to read or hang out with friends.

For Guinness, landing on a color scheme can be one of the trickiest aspects of designing a teen room. “There’s a tendency to want to go bold everywhere,” she explains. The wallpaper their young client had chosen—Ottoline’s Improvisation Number 1—was already quite striking, “so we looked at other ways of calming it down,” she says. By drawing colors from the motif of repeating dots, lines, and waves, Guinness found balance in the soft hues and contrast piping of the bed’s cushioned headboard. The mix allows the space to feel playful and innocent rather than too grown-up. Elsewhere they added fun shapes with a bright yellow side table (also made by Newall) and a curvy rattan nightstand with one pragmatic touch. “If you try to put a cup of water on top, it will wobble,” says Deyner, “so we had glass cut to the exact shape to sit flat.”

Despite all the attention paid to other parts of the room, both Guinness and Deyner agree that their favorite thing is a quiet window-front desk overlooking a green field. “I think it’s so lovely—all the natural light,” says Guinness, who installed a single shade from Virginia White’s zigzag collection instead of matching the blackout drapes on the opposite window. “I love the mix of the industrial-looking chair (’50s Pamono) and mid-century desk. They’re pieces that she can take with her when she grows up.”