A different type of puzzle that’ll keep them entertained for hours. 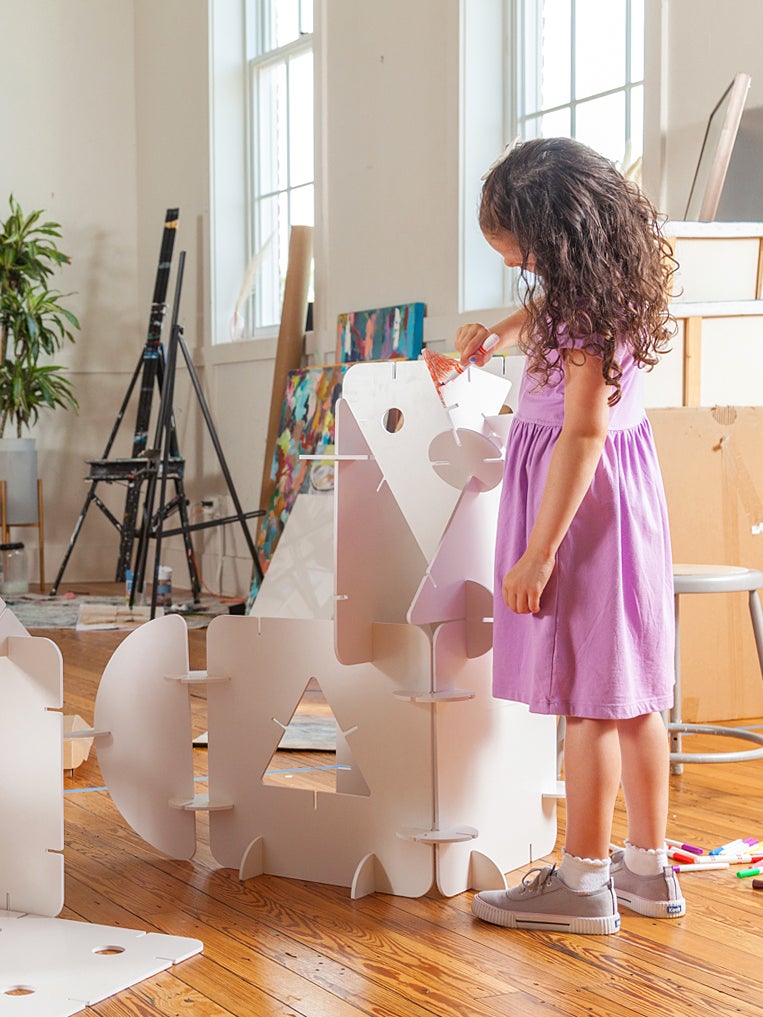 Chloe Varelidi had her aha moment while visiting the National Gallery in Washington, D.C., with her then-2-year-old daughter. They were standing in a room with Matisse’s modulus on display when her little one yelled out, “Toys!” “I thought to myself: Yes, why couldn’t toys be more like art?” recalls Varelidi, a trained architect–turned–play designer by trade. Fast-forward a few years, and Follies was born. The just-launched product consists of big building shapes that kids can connect to create whatever type of structures their imaginations come up with (from a spaceship to a puppet theater). Basically, they’re chic-looking modular playgrounds that will keep kids busy indoors come winter.

The Follies product line spans two instruction-free assortments: The Canvas Set ($159), which features nontoxic whiteboard surfaces that can be doodled on (and erased), and The Bauhaus Limited Edition Set ($199), a 40-piece collection that has handmade silk-screen prints inspired by the patterns and colors of the architectural movement. Varelidi has always had a soft spot for Charles and Ray Eames, who are known for their furniture designs but also their play items, such as the Solar Do-Nothing Machine from 1957. “Children are developmentally very capable of appreciating both aesthetics and functionality; it’s just that they usually don’t have much of a choice,” says Varelidi.

Piecing together the various panels and attachments is intuitive to little ones. Not only does it foster STEM skills and encourage them to think like an architect, it gets them moving afterward (Varelidi’s toddler son loves to run around the structures his now-5-year-old sister makes). “Unanimously the wiggle piece is a favorite in our household,” she says.

Follies is key for busy parents who are working from home, as the sets don’t require the help of an adult. You can also break them down and store them flat in a closet, making them ideal for small spaces and apartments. “When COVID started, I noticed all these very bulky products showing up to keep kids active, and I thought, okay, that’s great if you have a playroom or huge house in the suburbs, but I can’t live with an inflatable or a giant set of pillows in my tiny living room,” says the D.C.-based founder.

Another thing to feel good about: In 2021, Follies is donating products to the Homeless Children’s Playtime Project in D.C. and the Danish Refugee Council in Greece. In 2018, Varelidi ran a workshop with children in refugee camps in Greece, where she is originally from, and one of the first things she noticed was that there was no space for them to play. At the time she made a low-cost prototype called Play in a Box and took it to the camp to test it out (it had all sorts of toys inside: balls, Hula-Hoops, and puzzles). “The idea of something that would replicate that feeling of creating a space, but also last more than cardboard, was seeded in my head,” shares Varelidi. Jigsaw puzzles who?