7 of the Most Splendid Stained Glass Windows in the World

Each one is more breathtaking than the next. 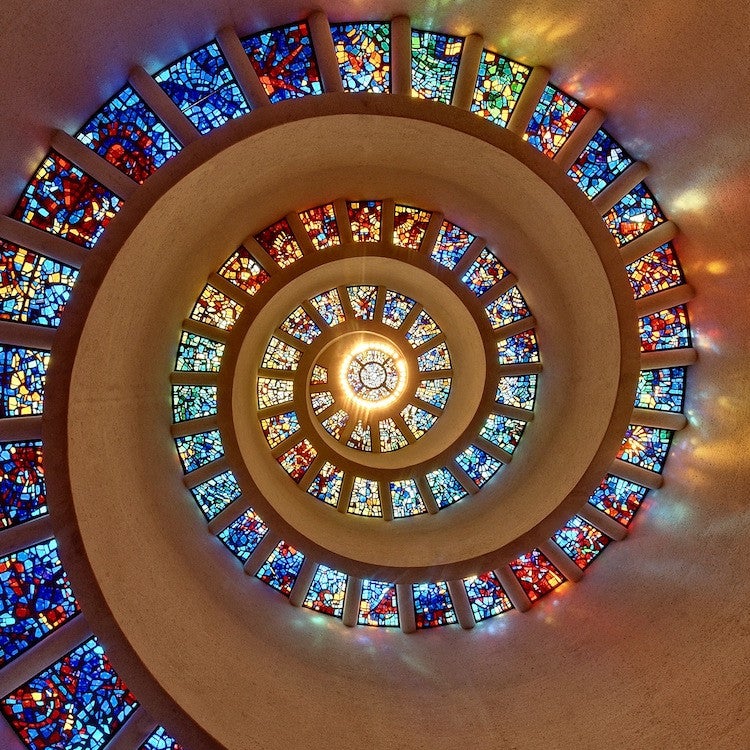 Courtesy of Daniel Parks via Wikimedia Commons CC BY 2.0

have been prevalent in places of worship for centuries. Though often associated with Gothic cathedrals, the colorful panes can be found in a wide array of religious sites, from mesmerizing mosques to modern churches.

Here, we take a tour of some of the most fantastic famous stained glass windows across the globe, from medieval masterpieces to contemporary creations. While the dazzling pieces drastically range in scale and style, each one possesses the ability to transform an earthly site into a transcendent kaleidoscope of colors.

Described as the “jewel of the Rayonnant Gothic period,” Paris’s stunning

was built in the 13th century by King Louis IX. Initially intended to house precious relics, Sainte-Chapelle is particularly renowned for its collection of 15 windows. Measuring nearly 50 feet in height, each monumental window depicts a sparkling interpretation of a biblical scene rendered in gem-like tones and impressive detail. In addition to these vertical masterpieces, the medieval chapel is also celebrated for the rich tracery and kaleidoscopic colors of its rose window.

Throughout the late 15th and early 16th centuries, a beautiful Gothic chapel was erected in the University of Cambridge’s King’s College. In addition to mesmerizing fan vaulting and a painting by Baroque master Peter Paul Rubens,

is famous for its treasure trove of narrative windows. The iconography featured in the splendid panes incorporates both religious and royal motifs and illustrates the artistic advancements of England’s late Gothic period.

, a 19th-century place of worship in Shiraz, Iran, is a breathtaking example of Islamic architecture. Featuring a façade decorated with a row of ornamental stained glass windows, the “Pink Mosque” offers worshippers a sunlit spectacle every day at dawn: as the morning light shines through the panes, it illuminates the interior’s rose-colored tiles and patterned Persian carpet with an enchanting array of vivid colors.

Designed by master of modernisme Antoni Gaudí in the late 19th century,

is one of Barcelona’s most famous destinations. On top of its whimsical towers and mesmerizing mosaics, the ever-growing church is known for its fantastic stained glass windows. Capturing the “expressivity and grandeur” of Gaudí’s vision, the multicolor windows range in shape and color scheme, making the basilica’s avant-garde interior even more eye-catching.

Nestled in Vence, an idyllic commune in southeastern France, the

was designed by modern artist Henri Matisse and built between 1943 and 1949. In addition to its minimalist spire and mosaic decorations, the tiny chapel features spectacular windows reminiscent of the artist’s famous series of cut-outs. Each work of art features strong color contrasts and bold forms that, when illuminated by the sun, put a transcendent twist on Matisse’s signature abstract aesthetic.

is an 11th-century Protestant church in Zurich, Switzerland. While the church was built in the Romanesque style—an approach known for its thick walls and subsequently small windows—it boasts a beautiful selection of stained glass. These spectacular windows were added in the 20th and 21st centuries, and include striking pieces by Pop Art icon Sigmar Polke.

The Chapel of Thanksgiving

is a non-denominational building in downtown Dallas, Texas. Built in 1976, the site was designed “to promote the concept of giving thanks as a universal, human value.” The contemporary chapel celebrates this idea through a striking stained glass spiral that appears to change color as it twists toward the sky.

This story was originally published on My Modern Met.