Minimalist City Street Maps Made From Layers of Laser-Cut Wood

Cool art with a personalized touch. 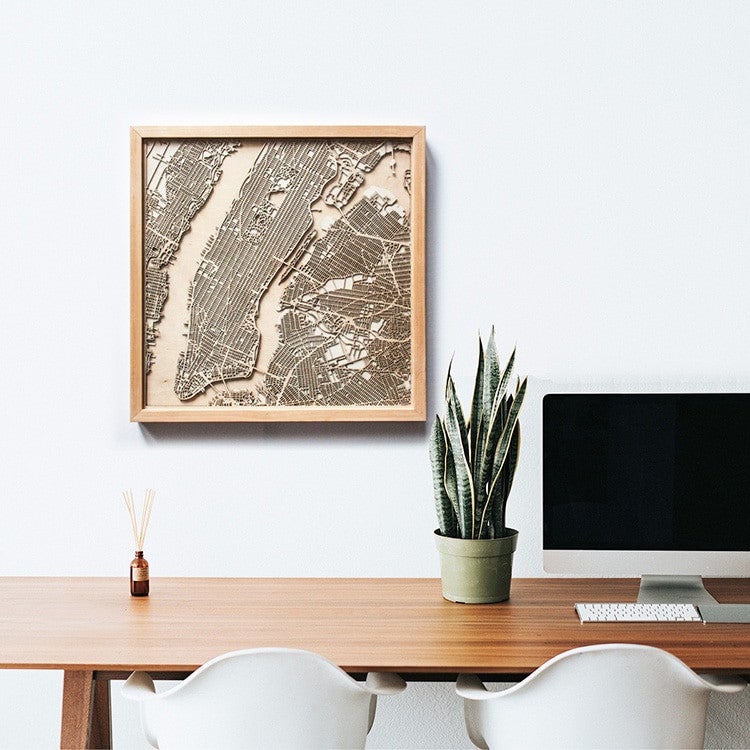 Polish architect Hubert Roguski is the creative mind behind CityWood maps—a range of minimalist, wooden, map wall art. Made from layered sheets of laser-cut wood, each piece illustrates various city maps from around the world, telling “a story about a city you love.” Having studied urban planning, cartography, and woodworking for several years, Roguski decided to combine his knowledge of all three to create the new home interior product, which has a Kickstarter campaigncurrently underway.

To render each piece, Roguski digitally separates layers of each map into sections, such as roads and rivers. Each section is laser-cut “with a one hundredth of a millimeter precision” from 3mm thick sheets of high-quality plywood. The final sanding, varnishing, and layering stages are then all completed by hand. The result is a stunning three-dimensional design, protected with a frame and plexiglass. So far, there’s a wide range of CityWood maps, including New York, Los Angeles, Berlin, Paris, and Rome, but there are plans to expand this list.

“I’ve come a long way from the moment when I first came up with the idea to design maps,” recalls Roguski. “My first projects [were] art graphics of maps. I created hundreds of maps of cities around the world.” After envisioning his final wooden design, Roguski recalls spending “countless nights designing and prototyping.” Now with over 170 backers, and with more than enough funds to take his prototypes into production, it’s evident that all of his hard work has paid off.

Find out more about CityWood via Kickstarter, where you can back the project and vote for your city to be added to the the next production run.

Above: London and Hong Kong

Made from layered sheets of laser-cut wood, and framed with plexiglass, each three-dimensional piece illustrates various city maps from around the world.

CityWood is currently campaigning on Kickstarter, where you can back the project and vote for your city to be added to the the next production run.

Above: Berlin and Hamburg

This article was originally published by Emma Taggart on My Modern Met.

Planning A Gallery Wall? There’s An App For That The Perfect Websites for Art Lovers on a Budget How 3 Designers Are Turning an Industrial Material Into Art