Why This Second-Act Career is Trending in the Design World

The new hoteliers reinventing their industry 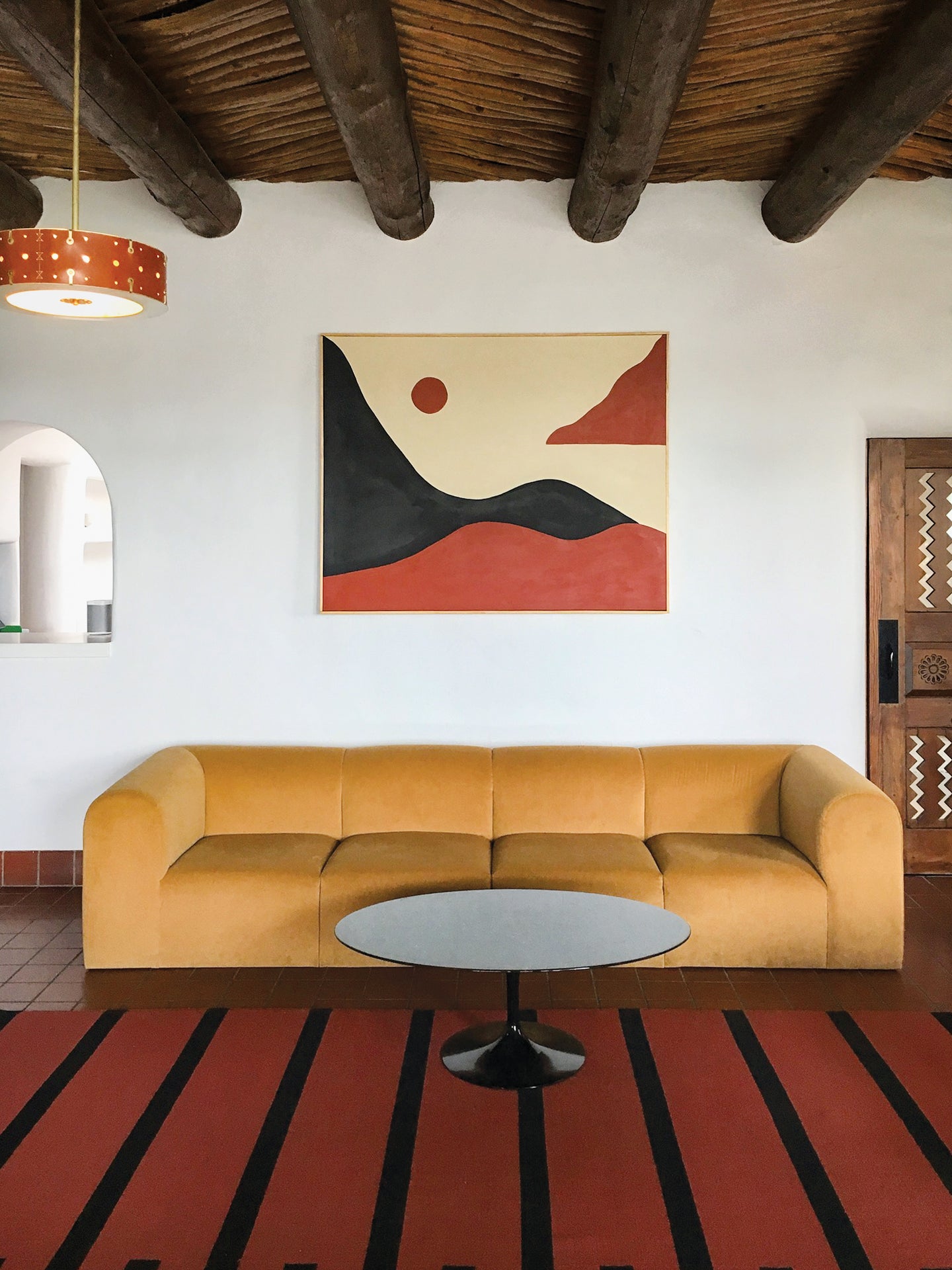 This story originally appeared in the Summer 2019 issue of Domino, titled “The Inn Crowd.” Subscribe to be the first to receive each issue.

No matter their industry—design, food, fashion—these tastemakers are moving into the hotel game and trying their hand at opening style-driven boutique properties.

El Rey Court Santa Fe, New Mexico Jay Carroll first fell for Santa Fe 20 years ago when he was working as a roadie for a touring country band. As a creative director at Levi’s, he would return often to source traditional Chimayan textiles. Finally, last year, he and his wife, Allison (they’re the couple behind the groovy Joshua Tree–based olive oil and lifestyle brand Wonder Valley), put down roots in the piñon-studded high desert town, partnering with a few friends to reimagine the 1930s-era El Rey Court motor lodge as an 86-room boutique hotel. “Once we peeled back decades of furniture, the bones really sang,” says Carroll. By channeling the stripped-down aesthetic of pioneering Southwestern creatives such as Georgia O’Keeffe and mixing in the right amount of New Mexican counterculture references (think: Dennis Hopper in the 1970s), while tapping up-and-coming artisans like Taos-based ceramist Logan Wannamaker, the owners have created a property that holds fast to its sense of place without feeling trapped by regional design tropes. The hotel’s agave-focused cocktail bar, La Reina, has become the new hang for residents, who are also welcome at the revived swim club. For Carroll, this cross section of traveler and local is the real marker of success.

Casa Iris Orbetello, Italy Most urbanites harbor some fantasy of ditching hard-boiled city life for a gentler existence. Stylist James Valeri and his hospitality veteran husband, Matthew Adams, actually did it, leaving behind New York City for the tiny town of Orbetello in the Maremma—Tuscany’s idyllic swath of southern coastline where farmland rolls straight into the Tyrrhenian Sea. The couple spent three years turning a 16th-century palazzo that had been in Valeri’s family for a century into a three-bedroom bed-and-breakfast. The duo enlisted the same restoration team that worked on the Sistine Chapel to reveal multiple layers of frescoes, while bringing the historic home into the modern era with polished concrete floors and a fresh pastel palette of soft pinks and blues, and furnishing it with impressive pieces from heavy-hitting Italian designers, like an Eros dining table by Angelo Mangiarotti, Tommaso Barbi brass bedside lights, and Gio Ponti mirrors.

Hotel Amparo San Miguel de Allende, Mexico After getting married in San Miguel de Allende four years ago and returning whenever they could sneak away from their home in Houston, textile designer Mariana Barran de Goodall and her attorney husband, Taylor Goodall, purchased a 300-year-old former mayor’s residence in the cobblestone center of town and transformed it into a five-suite guesthouse. At the start of the project, the first-time hoteliers knew one thing: San Miguel didn’t need another caught-in-time luxury property. The couple did embrace the period architecture, refreshing original details like Belgian-inspired wood paneling and 18th century fireplaces, but then went way off Colonial script, adding Aztec-inspired murals by local artist Lucas Rise; reimagining traditional ceramic tiles in modern, graphic patterns; and mostly forgoing the expected, intricately carved wood furniture for streamlined mid-century pieces upholstered in bold colors and eye-catching prints. Keeping the price point low and the service high, Amparo is a breath of fresh jacaranda-scented air.

Casa Mami Pioneertown, California The refrain “Let me ask the manager and get back to you” and then hearing crickets prompted Carlos Naude, founder of Los Angeles–based production company ACE Content, and his wife, Whitney Brown, owner of lingerie line Valentine NYC, to imagine a new kind of guesthouse in Joshua Tree’s increasingly hip Pioneertown. “You know how it is—you love the hotel sheets and you want to know where to buy them, but then it’s impossible to actually find out,” Naude says of opening the eco-friendly Casa Mami, a two-bedroom, high-design retreat on five acres of sprawling Mojave Desert, where most of what you see in the home—from big-ticket items like Marcel Wanders’s Cloud Sofa to shampoo by Public Goods—is available for guests to order online. Also setting the house apart in an area that is seeing an uptick in Airbnbs catering to weekend crowds is its modern ethos. “Pioneertown was built as a set for Westerns in the 1950s, and the whole region adopted that design vibe. We would feel ourselves falling into it and say ‘no, no, no, resist,’” Naude jokes about the home’s bright white exterior in a sea of earth tones, with interiors that take a cue from Luis Barragán—the pop of a marigold wall in a bedroom, the surprise of the chartreuse hallway—rather than an episode of Gunsmoke.

The Deacon Philadelphia, Pennsylvania When Everett Abitbol, who at the time owned and operated an impressive fleet of taxis in Philly, saw the deserted, early-1900s First African Baptist Church not far from the city’s hopping Italian Market, he knew that with a little imagination (and a business partner who happened to be in construction) he could transform it into a boutique hotel. The soaring nave became a shared living room and kitchen flanked by eight bedrooms. And while the space’s ecclesiastical history is celebrated, Abitbol didn’t want things to feel “too churchy.” This meant keeping the original stained-glass and arched windows but exorcising any lingering Sunday seriousness with cheeky artwork, like Robert Indiana’s irreverent USA 666 and Tom Palmore’s Snowflake, an enormous lithograph of a white ape. Another must: creating deliberate tension with the decor—pairing a CB2 chair with Faye Toogood’s Roly Poly design, and a floor-to-ceiling mural of Julius Erving aka Dr. J mid-dunk next to the chicest black marble bathroom sink.

The Inn at Kenmore Hall Richmond, Massachusetts It wasn’t at all surprising to Frank Muytjens, the former head of menswear at J.Crew, and Scott Edward Cole, a longtime restaurateur, that they would love hosting people at this 200-year-old Georgian manor in the Berkshires, which the couple purchased and converted into a five-room bed-and-breakfast last year. Even less of a shocker was that they went with a fairly masculine color palette, featuring classic suiting shades like flannel gray and deep navy to complement the home’s 18th-century millwork and wide-plank wood floors. When they finished the renovation—a top-to-bottom process that let the original details shine while outfitting the space with modern comforts, such as en suite bathrooms with radiant-heat floors and unfussy mid-century pieces (the litmus: one should feel comfortable having a glass of wine on any piece of furniture)—neighbors dropped in to congratulate the pair. “People have such a fondness for the house, and they’ve reached out to share memories with us,” says Cole upon learning that Kenmore was once a prestigious summer artist colony, that Leonard Bernstein lived in the guest cottage, and, perhaps most poignant, that a recent guest celebrating her 60th wedding anniversary had childhood choir practice in the very room in which she stayed.

Check Out More Getaway Spots: The 10 Most Wish-Listed Airbnb Homes Around the World 6 Lighthouses You Can Actually Spend the Night In 14 Crazy Beautiful Glampgrounds to Add to Your Travel Bucket List