A Traditional Lakeside Cabin Gets a Modern Facelift

How one designer turned a dated 1950s home into a contemporary retreat. 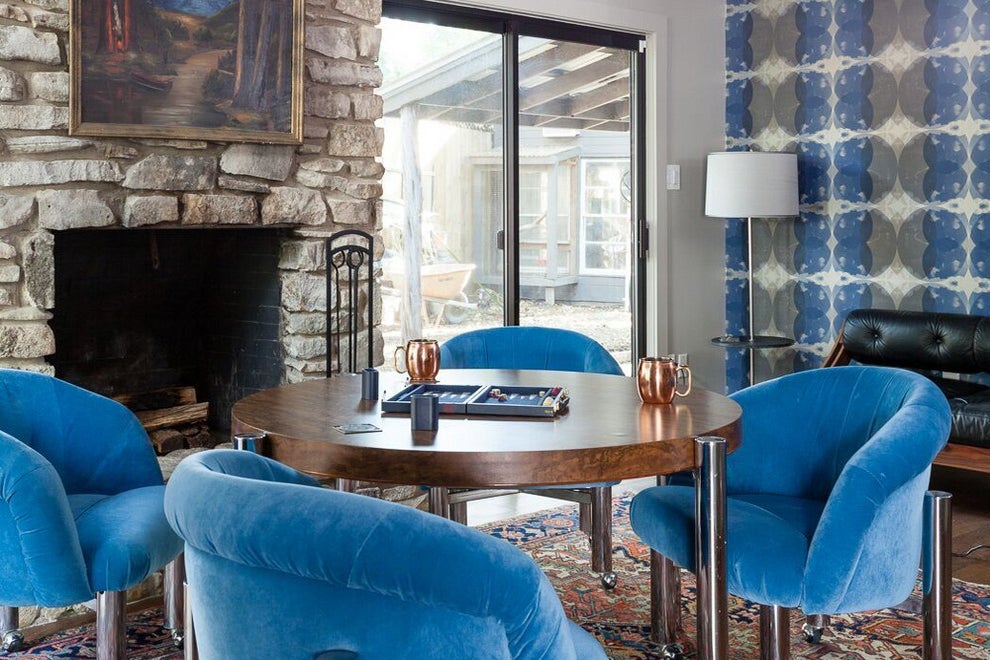 The thought of a 1950s cabin doesn’t exactly conjure images of chic design—and neither did this one, located off Lake Austin, until designer Erin Williamson set about renovating it. “It was pretty funky,” says Williamson of the old space. “A blast from the past, and not in the best way. It hadn’t been updated in forever, so we got new roofing and siding and gutted all the interiors.”


Over the course of 18 months, Williamson and her team transformed the dated 4,000-square-foot A-frame residence into a rustic getaway that blends vintage elements with contemporary, colorful accents. Certain features, like shiplap ceilings and exposed wood beams, remain from the old space and add to the home’s charm.

One more caveat—the home, which has nine bedrooms, was actually designed with the purpose of turning into a vacation rental. Dubbed the Okena Lodge, the structure is available to rent now either as four separate units or one big home.

Which, from a design perspective, provided Williamson with the hefty task of crafting four spaces—each with their own distinct personality—that still felt cohesive.

Luckily, the owners of the home were open to dramatic change. “My clients are amazing and it was such a labor of love,” says Williamson. “They gave us so much free reign to do really unique things and didn’t pigeonhole us into making it a sterile hotel-like space.”

We spoke to the designer to learn more about how she accomplished this and created a modern take on the traditional cabin.

What was your style inspiration for the space?

It’s definitely cleaner and more modern. We tried not to erase all the vintage charm, and the clients really wanted something that wasn’t cookie cutter. Every bathroom and every kitchen had to be totally different.

Can you walk us through each of the units? How would you describe the aesthetic of each one?

The first one is kind of the flagship one because it’s the owner’s unit. Obviously someone who rented this would feel comfortable, but it’s very tailored to their tastes. It has special touches that make it feel more luxurious than some of the other [units], such as custom lighting and a backsplash designed to bring in that A-frame shape from the exterior to the interior. They wanted it to feel bright and fresh but still very functional—just a little more luxurious. They also have children, so their rooms are all personalized.

advertisement
The second unit is pretty colorful and a little more peppy, but we tried to keep the kitchen fairly neutral, except for the copper accents. It has three bedrooms, and we added warm accents for a little more of that Marfa feel.

This [third unit] is the more masculine one; our clients call it the “dude unit.” They said when in doubt, just use black, so that’s exactly what we did. We used all grays and black and it does feel kind of cozier, but since it’s painted from the same color palette it’s not choppy.

I also thought it was really cool that [the client] eschewed the traditional sofa-in-front-of-the-fireplace thing and instead set up a poker table there.

We went with a “camp-y chic” sort of theme for the last unit. The green bedroom feels very outdoorsy and the wallpaper in the kitchen has arrows. That was such a challenge because the kitchen was so tiny and we had to figure out a way to make it functional and interesting. It’s the smallest unit, but it has the bedroom—we tried to turn that super spacious bedroom into a retreat.

Do you have a favorite unit?

It’s like Sophie’s Choice! I think maybe the [second] one, with the blue ceiling, because the skylight is really cool. But the first unit also has the best windows.

From the beginning, were you looking to maintain continuity in the home or design each unit separately?

We did try to give each its own unique personality, but hopefully it still feels like they fit in the same structure. The first decision was to run the same flooring throughout the whole property to make it feel grounded. The loft spaces do have the original pine flooring so we didn’t replace those, but everything else was replaced with a dark hickory wood.

Also in terms of the choices we made, even though we gave [the units] different identities we tried to use things that felt thematically similar in terms of prints and patterns. They all go together and have similar scale and saturation levels.

There’s a bit of that traditional lakeside cabin look in parts of each unit—the stone fireplace, slanted ceilings, natural materials, and exposed beams, for example. Was incorporating that classic vibe important for you?

Definitely. We wanted it to feel like an old-school lake cabin but with modern touches. There’s a little bit of nostalgia in that it kind of feels like a childhood home. There’s a bit of Wes Anderson channeling, but I hope not too on the nose!

What were your biggest challenges with the remodel?

The bathrooms were complicated because they were so small. Often people think that a small space should be easier because there are fewer materials, but all those transition points and interfaces are really, really important so we had to be very precise and specific about where things met. And also generally just being careful with scale.

You work with residential projects mostly—was it a challenge to create a space that’s meant to serve as a vacation rental versus designing a home for a specific client in mind?

Absolutely. We wanted to make sure that the surfaces are pretty hard wearing but still feel soft. The surface should be wipeable, [made of] either leather or polyester. The rugs are generally dark so they hide traffic, or they’re inexpensive and easy to replace. The countertop materials are all very durable—caesarstone and granite.

We’re definitely mindful that other people may come through and not treat it like their home, but we tried to keep personality in there anyway. Just because it’s a rental doesn’t mean that you can’t have some cool touches.

Who do you envision as the ideal guest for the rental?

It would be so amazing to have a huge family renting the whole place and using all the space. It seems like such an awesome gathering place, plus it has a super location next to the lake.