Why One Designer Chose to Build a House From Scratch

A husband and wife design duo share what it takes to create a dream home. 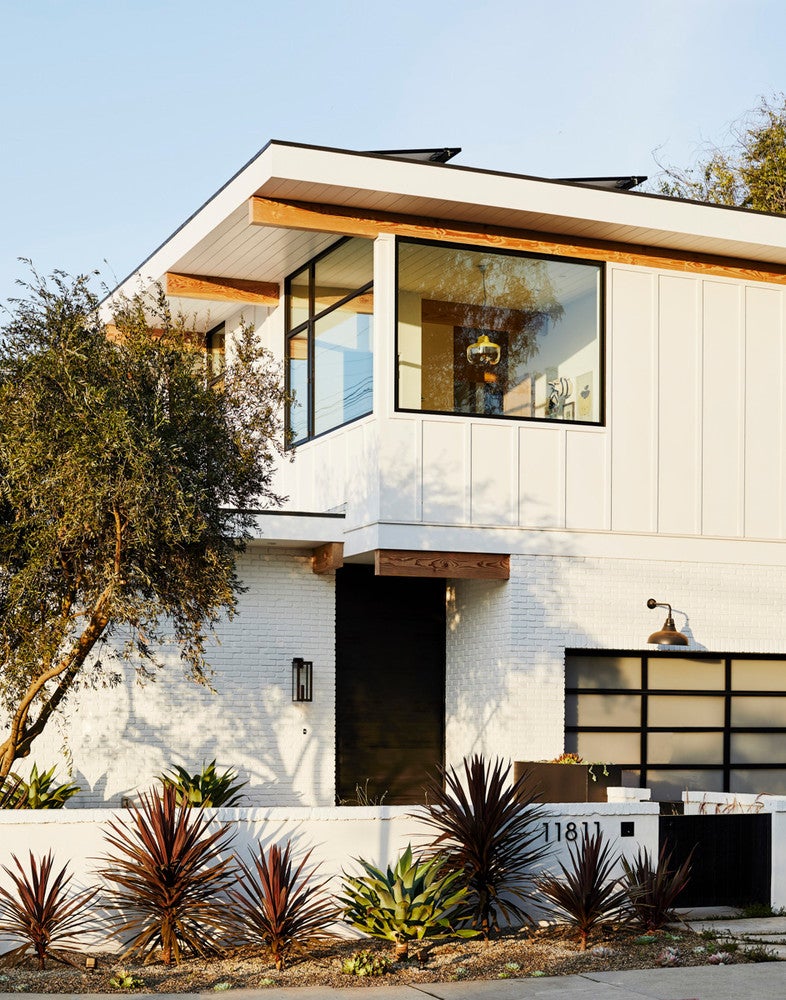 Building a house from the ground up is a daunting task; however, when you’re a designer and your husband is a residential builder, the burden is slightly alleviated.

“The concept of doing something ground up was appealing because we could do whatever we want with it,” says designer Janice Barta when asked why they chose to build instead of renovate. “As an artist, you get to have so much more fun with it.”

Barta, who runs the LA-based design firm Barta Interiors had a very clear vision for what her dream house was going to look like from the get-go. Both she and her husband had long been in love with mid-century architecture and modern design, but also wanted to incorporate warmer elements that their two children could feel comfortable in.

The result is a 3,600-square-foot home that’s basically perfected the art of functional elegance. From a custom sectional sofa in the more tailored-looking living room (“I wanted everyone to be able to sit there”) to matte finishes on the light-colored floors (“When things fall on the floor, they’re more visible when there’s a sheen”), the space is both clean and modern yet cozy and traditional.

“I wanted to make sure that the main floor where we’re hanging out all day is something that’s great for the kids too, and it really is,” says Barta. “One of their favorite things is a little built-in window seat; every time the kids have a playdate or want to read, they go right to that spot. It makes me so happy because you can tell that they’re happy and comfortable.”

Barta also worked to make the basement into a playroom haven for the little ones, saying that creating space where they could run free was a top priority for her.

“The main reason we wanted to build a house was because the home we lived in before had an open kitchen-living room vibe, but there wasn’t a family room space where kids could have fun and go crazy. They’re kids, they should have a playroom where they can build something and not have to put it away,” she explains.

Of course, the adults have their space too. Barta, who has a degree in interior architecture and design, designed both the architecture and decor. Inspired by the LA-modern style espoused by photographer Julius Shulman and architect Cliff May, she looked to layer the traditional architectural structure of California mid-century homes with some playful elements. As a result, colorful throw pillows, tons of decorative vases, and funky light fixtures are scattered throughout.

“The bones are the most important thing [in a home], but I have more of a love affair with the decor and the objects that go in a home because that’s what gives it personality and charm,” says Barta. “Some people have a home that’s extra layered with lots of little trinkets and things they’ve collected over time, which feels so different from a home that’s clean and curated, but they’re both really beautiful and tell the story of the person that lives there.”

In this image: Circa Lighting Henry Industrial Hanging Light, $798

Barta brought a meticulous attention to detail to designing the home, and nowhere is this more evident than in the kitchen. Rift white oak detailing, explicitly chosen so the grains look more natural, was wire-brushed then finished off with a matte clear finish. Barta broke up the cabinet look with a deep black-blue paint shade, lending a timelessly chic look to the space.

“It’s very handsome, but also warm,” she says of the kitchen. “I’m slightly obsessed with the Swedish look of the furniture and architecture; I love modern homes, but they always feel kind of cold. When you go to these old cabins and you see the real solid wood detailing, there’s an innate charm in it that lasts for years and years.”

In fact, Barta loved that classic wooden look so much she kept the theme going in various rooms of the home. From wood detailing in bathroom cabinets to exposed wooden beams in the home’s exterior to built-in shelving, the house is full of those natural touches that bring a clean finish.

Barta’s favorite room, her office, also exhibits these wooden elements in the form of floor-to-ceiling cabinetry. And while it’s her go-to space now (even using it as a relaxing library at night), it presented a few problems initially.

In this image: Aerin Paix Table Lamp in “Antique Brass”, $420; Jean Louis Deniot Heliodor Dining Table; Aerin Sommerard Large Triple Arm Chandelier, $1,680 “The office space was actually one of my biggest design challenges, and it ended up being one of my favorite rooms in the house which we didn’t think it was going to be. I run a design business and work from this space that’s attached to where I live. I’m also an artist and I paint and love having my art in my home…I wasn’t sure how I was going to balance all that in the beginning!” says Barta.

In the end, the fusion of traditional and contemporary elements really paid off—and Barta and her family aren’t the only ones who think so.

“We have neighbors who have lived in this area all their lives knock on our door to tell us it’s their favorite house in the neighborhood because there’s so much character in it!” she says.

How the Everygirl Co-Founder Fills Her Home with Holiday Cheer A Creative Work-Live Space That Masters the White on White Look This Home Was Developed Entirely With a Virtual Design App Learn to love your inbox again—sign up for Domino’s daily email.