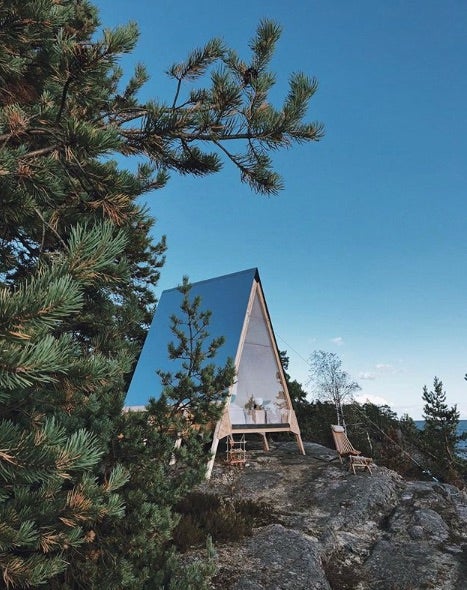 Staying in a faraway place is always an adventure. But when you’re privy to hiding out in a home as cozy as an A-Frame, it’s a wildly different experience than, say, staying nestled in your average hut or seeking solace in a standard yurt.

Beloved throughout the 1950s and 1970s for their pyramidal forms and sloping ceilings, these steeply-angled structures have since reclaimed their glory amongst cabin lovers and architecture whizzes alike. Come autumn, their massive windows and decks make them the popular getaway of choice.

As we begin to bookmark all the places we’d like to cuddle up this fall, we can’t help but feel drawn to these pointed pads. From a snowbound woodland escape in the heart of Oregon to a contemporary cabin in the southernmost tip of Patagonia, we scoured Instagram for the most whimsical A-Frames the world has to offer. The best part? You can experience almost all of these majestic stays ahead IRL through Airbnb.

Situated in Girdwood, Alaska, this rusty red-roofed cabin stunningly sums up solitude and serenity—and, quite frankly, has us craving a piping cup of hot cocoa.

An homage to both geometry and nature, this picturesque Park City spot—dubbed the A-Frame Haus—was built by the owner’s grandfather in 1988 and boasts not just one, but two, balconies for soaking in the surrounding vistas.

Talk about a red-hot getaway. Between its fiery exterior and lush environment, this darling Airbnb, situated along the Columbia River Gorge, will put you in the mood for vacation even before you step foot in the Pacific Northwest.

Perched halfway up the Andes Mountains just outside the town of Vilches in Southern Chile, this tiny contemporary Patagonia abode is about as idyllic as it gets. Unlike its older, refurbished predecessors, this cabin’s sleek facade and updated interior offer a fresh take on forest living.

With its jet black exterior primed for visual drama, this Scandinavian-inspired rental along the East Sandy River in Mt. Hood, Oregon is one high-impact retreat we simply can’t resist.

Tiny, sustainable, and secluded? Count us in. While this adorable A-Frame in Finland (a space specifically designed to leave a minimal carbon footprint) only boasts enough room for two, the teeny escape might inspire your biggest adventure yet.

Nothing screams autumn quite like crafting s’mores and catching up on a good read by the fire. With enough firewood to last you through the season, we wouldn’t mind hiding out at this whimsical woodland retreat all winter long.

There’s a reason glamping has gained serious traction in the past few years, and we’re starting to think this countryside cabin in Australia has something to do with it.

While Desanka Fasika’s earthy Hollywood Hills might not be in a remote locale, the sun-drenched space encourages you to unwind all the same. Between its natural wood composition and industrial spiral staircase, the artist’s luxe Cali home exudes pure retro ski lodge vibes.

Okay, so this jungle retreat might not spark familiar fall feelings, but we can’t resist that stunning roofline. The beauty of The Triangle Siarango, a one-of-a-kind A-frame house nestled within a lush tropical garden, lies in the repetition of its own basic geometry.

Coming in at just 600-square-feet, this itty-bitty lakeside cabin in Ontario, Canada—home to the cutest whitewashed kitchen we’ve ever seen—is a small, yet sweet, treat for anyone looking to reconnect with nature.

They say that good things come in small packages, and we wholeheartedly agree. Thanks in part to its chilly surroundings, this picture-perfect abode is just begging you to warm up inside.

3 Cute Cabins That’ll Convince You to Try Being Outdoorsy

This Tiny Cabin Is the Ultimate Minimalist Escape

Cozy Cabin Bedrooms and What We Learned From Them