Shop them from these independently owned bookstores. 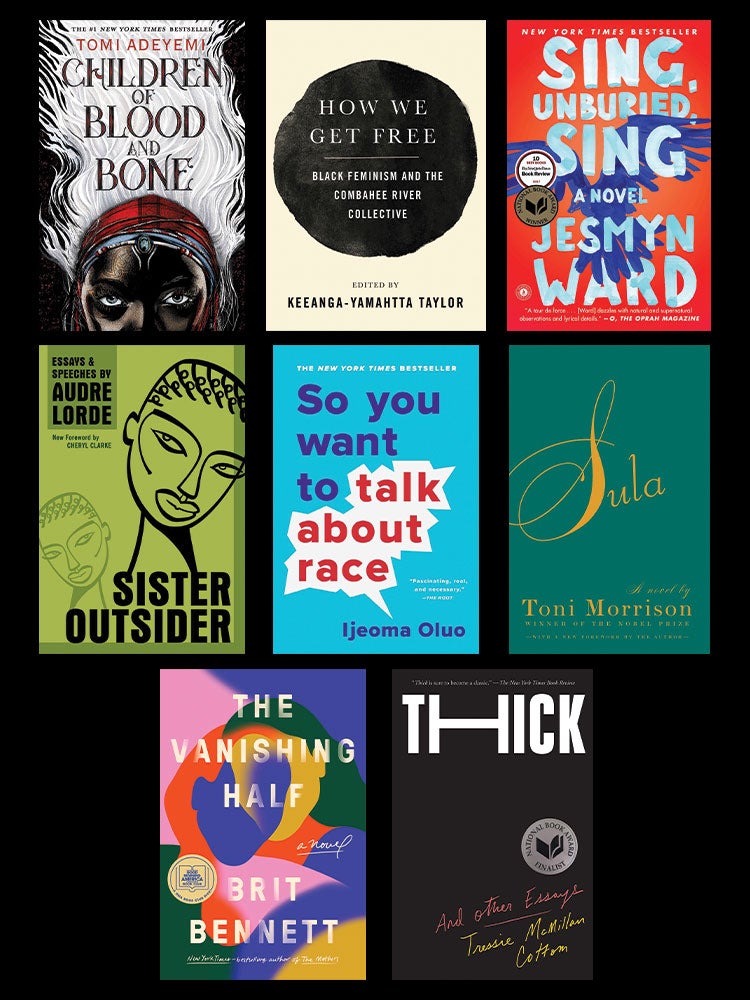 As protests worldwide against police brutality and the systemic oppression of Black people continue, many have taken to Instagram, Twitter, and more to share their recommendations of books by Black authors. These titles range from straightforward, informative nonfiction (like How to Be an Anti-Racist by scholar Ibram X. Kendi) to classic novels.

Reading books by Black authors isn’t just about learning about racist systems through history and criticism, but also celebrating, amplifying, and appreciating the many nuanced and varied experiences, ideas, feelings, and imaginations of these writers. Here, we’ve assembled a list of 15 books recommended by Black bibliophiles on social media. There are thousands more titles to be read, appreciated, and shared—this is just a starting point.

Order your next read from a Black-owned bookstore, like the Bronx’s Lit. Bar or Washington, D.C.’s Mahogany Books. To find one near you, consult this helpful graphic created by the Latinx-owned shop Duende District Bookstore.

So You Want to Talk About Race by Ijeoma Oluo

Recommended by:Erica Chidi Cohen, founder of LOOMThe gist: This nonfiction book is essentially a guide to topics that arise when discussing race, from intersectionality to white privilege—information that provides a good foundation for learning more.

“You have to get over the fear of facing the worst in yourself. You should instead fear unexamined racism. Fear the thought that right now, you could be contributing to the oppression of others and you don’t know it. But do not fear those who bring that oppression to light. Do not fear the opportunity to do better.”

Children of Blood and Bone by Tomi Adeyemi

Recommended by:Danielle Prescod, style director at BET The gist: This fantasy YA series draws inspiration from West African mythology and culture to craft an inspiring story of a young girl pushing against a corrupt monarchy.

“We can always do something to fight back. We have the power to change the evils in the world. We’ve been knocked down for far too long. Now let’s rise.”

How We Get Free: Black Feminism and the Combahee River Collective by Keeanga-Yamahtta Taylor

‘How We Get Free: Black Feminism and the Combahee River Collective’, Haymarket Books ($15)
Shop

Recommended by:Erica Chidi CohenThe gist: This collection of writings and interviews from former members explains the history, platforms, and beliefs of the Combahee River Collective, a Black feminist lesbian organization that was active in Boston from the mid-1970s to 1980.

“Above all else, our politics initially sprang from the shared belief that Black women are inherently valuable, that our liberation is a necessity not as an adjunct to somebody else’s but because of our need as human persons for autonomy.”

Recommended by: Nicole Richie, actress and founder of House of HarlowThe gist: A collection of essays and speeches by Black lesbian feminist poet and writer Lorde that includes some of her most essential writing on racism, sexism, and homophobia.

“Guilt is not a response to anger; it is a response to one’s own actions or lack of action. If it leads to change, then it can be useful, since it is then no longer guilt but the beginning of knowledge. Yet all too often, guilt is just another name for impotence, for defensiveness destructive of communication; it becomes a device to protect ignorance and the continuation of things the way they are, the ultimate protection for changelessness.”

Thick and Other Essays by Tressie McMillan Cottom

Recommended by: Tembe Denton-Hurst, staff writer at The Strategist The gist: These essays by sociologist Cottom span topics from popular culture to contemporary politics, frequently examining the role that language plays in racism.

“Being too much of one thing and not enough of another had been a recurring theme in my life. I was, like many young women, expected to be small so that boys could expand and white girls could shine. When I would not shrink, people made sure that I knew I had erred.”

The Vanishing Half by Brit Bennett

‘The Vanishing Half’, Riverhead Books ($25)
Shop

Recommended by:Antonia, @blackgirlthatreads  The gist: The latest from the author of The Mothers, this novel is about identical twin sisters who drift apart as they get older—with one passing as white and keeping her past a secret from even her husband.

“A body could be labeled but a person couldn’t, and the difference between the two depended on that muscle in your chest.”

Recommended by: Tembe Denton-HurstThe gist: This complicated, heartfelt novel is about a friendship between two girls and the tragedy that changes their fates and their impressions of each other.

“There, in the center of that silence, was not eternity but the death of time and a loneliness so profound the word itself had no meaning. For loneliness assumed the absence of other people, and the solitude she found in that desperate terrain had never admitted the possibility of other people. She wept then. Tears for the deaths of the littlest things: the castaway shoes of children; broken stems of marsh grass battered and drowned by the sea; prom photographs of dead women she never knew; wedding rings in pawnshop windows; the tiny bodies of Cornish hens in a nest of rice.”

There Are More Beautiful Things Than Beyoncé by Morgan Parker

Recommended by:Danielle PrescodThe gist: This poetry collection centers on the experience of contemporary Black womanhood, in both vulnerable and powerful language.

“Summertime and the living is extraordinarily difficult/ The sunset seems unimportant/ It becomes a calm/ Sunglasses, white wine spritzers/ Would you hate yourself less if you picked your fruit from trees.”

Freedom Is a Constant Struggle by Angela Y. Davis

Recommended by:Glory Edim, founder of Well Read Black Girl The gist: In this 2016 release by Dr. Davis, she examines contemporary and historical fights against systemic oppression.

“I feel that if we don’t take seriously the ways in which racism is embedded in structures of institutions, if we assume that there must be an identifiable racist who is the perpetrator, then we won’t ever succeed in eradicating racism.”

Recommended by: Nicole RichieThe gist: The winner of the National Book Award for Fiction, this novel follows the experience of a Black family, particularly a 13-year-old boy named Jojo, as they embark on a road trip to reunite with their father, a white man, who was released from prison.

“Sometimes the world don’t give you what you need, no matter how hard you look. Sometimes it withholds.”

Recommended by:Danielle PrescodThe gist: In this highly personal memoir, writer Laymon meditates on the experience of growing up as a Black man in America and his complicated relationship with his family.

“The nation as it is currently constituted has never dealt with a yesterday or tomorrow where we were radically honest, generous, and tender with each other.”

The Warmth of Other Suns by Isabel Wilkerson

Recommended by:Danielle Henderson, TV writer The gist: This nonfiction book contextualizes and examines the Great Migration—the movement of nearly 6 million Black Americans from the South to northern and western cities.

“Thus the Great Migration had more in common with the vast movements of refugees from famine, war, and genocide in other parts of the world, where oppressed people, whether fleeing 21st-century Darfur or 19th-century Ireland, go great distances; journey across rivers, deserts, and oceans or as far as it takes to reach safety with the hope that life will be better wherever they land.”

The Fire Next Time by James Baldwin

Recommended by:Derrick and Ramunda Young, founders of Mahogany BooksThe gist: This personal work by celebrated author Baldwin focuses on the history of race in America and the relationship between race and religion.

“I know that people can be better than they are. We are capable of bearing a great burden, once we discover that the burden is reality and arrive where reality is.”

“The nature of the criminal justice system has changed. It is no longer primarily concerned with the prevention and punishment of crime, but rather with the management and control of the dispossessed.”