This Charming Pittsburgh Home Has 3 Hidden IKEA Hacks—Can You Spot Them?

It's the definition of cozy. 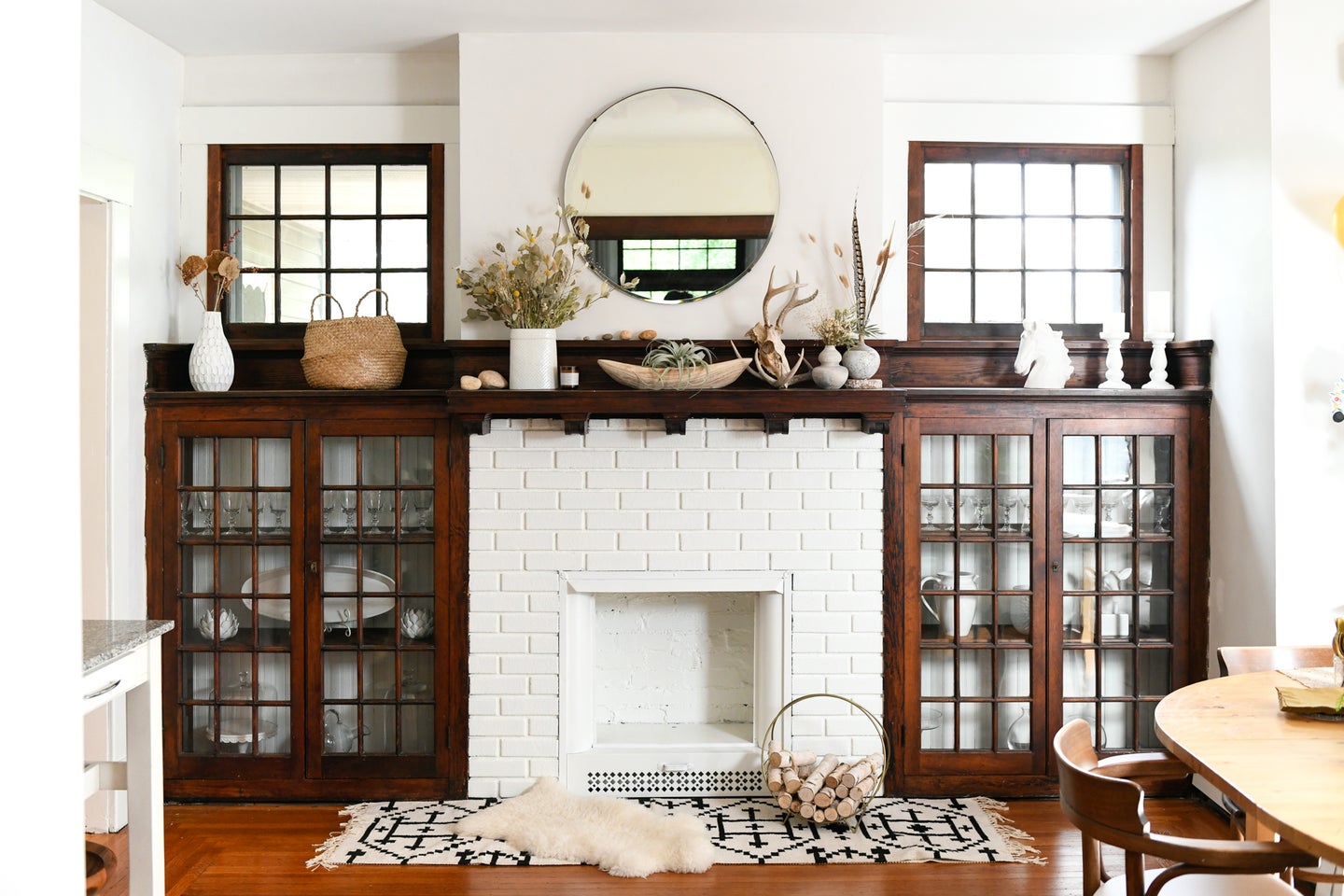 Pregnancy and home improvement are less compatible than oil and water—but, Erin Kelly already knows that.

“Right when we were moving out of our old house, we found out we were pregnant with our second child. We were like, ‘Oh, great. This is great timing!’ she laughs. Kelly, an interiors and food photographer, and her illustrator husband, Rich, were determined to make their new home as livable—well, at least, as baby proof—as possible before her impending due date. Coincidentally? “The entire renovation took exactly nine months!”

Now a sun-drenched haven for both their little ones, the couple’s four-bedroom, craftsman-style home outside of Pittsburgh, Pennsylvania is a living picture of what it means for a house to have good bones. The space’s oak wood floors, encaustic tiled fireplace, and detailed millwork were a big drawing point for Kelly and her husband, but that doesn’t mean she felt confined by tradition. A touch of paint and a handful of cleverly disguised IKEA hacks gave their storied space the splash of style it needed.

We caught up with Kelly to talk all things home—from breaking the rules on character and designing an adult-approved nursery to styling with antiques and making IKEA chic.

“When we saw the house for the first time we felt like it would maybe require a few updates, but it quickly became a down-to-the-studs job,” recalls Kelly.

As far as the refurbishment went, the pair’s primary task at hand was to return the space—which had undergone a number of unfortunate decorative decisions at the hands of previous homeowners—back to its original glory.

“The entire house was carpeted, but underneath the carpets were beautiful oak and pine floors that just needed to be refinished,” recalls Kelly. “It was the same thing with the built-ins: We removed the fake vinyl panelling and there was beautiful millwork behind it! It was kind of this process of peeling away layers and then trying to figure out, ‘What did these original fireplaces look like?’”

Complete with not one, but two exquisite fireplaces—one swathed in green encaustic tiles, the other surrounded by beautiful glass built-ins—, the hearths now double as statement focal points. In the front sitting room, the pair patched and painted the damaged mantel; whitewashing the shelving in the process to disguise any visible woes. Kelly opted for a similar contrasting treatment for the brick fireplace in the dining room.

“When we painted the brick it kind of became this yin and yang thing—keeping the wood but lightning it up with the brick. Then it was the inverse [in the other room], with that beautiful green tile showing in such a more elegant way against that white,” she says.

Upstairs, the couple’s master bedroom is a secret homage to IKEA hacks—although, you’d never really know it. Instead of falling down a crafty path of DIY cliches, Kelly and her husband (“All the credit really goes to him—I’ll come up with the idea, he’s the one with the woodworking expertise” she notes) made seamless, elevated tweaks to their favorite finds. Their first big project? The bed frame.

“I liked the GJORA bed but I couldn’t understand how you wouldn’t have a headboard, so we got a piece of really nice birch and custom cut it according to the posts,” explains Kelly. With the new addition of the headboard, the pair removed the highest bar that connects the two posts at the head of the bed.

For her bedroom vanity, the pair upgraded a standard EKBY ALEX shelf by adding mid-century-style legs to the base. “I think it’s a matter of looking at it, figuring it out, and not using it for what it really is,” Kelly says of her hacking motto.

Back downstairs, yet another polished hack. Amidst a layered sea of dried botanicals and bohemian textiles, the IKEA credenza that sits in the living room off the kitchen has since been upgraded with mid-century-style legs and a stained dark wood top and siding for a more streamlined, traditional look.

How would you describe your style? Would you say you gravitate toward one aesthetic in particular?

It’s interesting. In terms of the furniture and decor I gravitate toward and the decor, I really love mid-century modern. But, I think bringing in natural elements is awesome. With this house in particular, it has so many cool traditional and craftsman-feeling moments that I didn’t want it to be overwhelmed by all this mid-century modern stuff. It would feel disjointed. So, I was trying to be respectful—especially in those two rooms with the fireplaces and mantels. Those are really the centerpieces of the rooms, and the fact that there are these beautiful built-ins… I wanted the furniture and decor to highlight those.

As a food photographer, I know that the kitchen is an important room for you. How did that influence the way you designed this space?

Because I’m shooting and styling food in that space a lot, it was really important that there was light—and big windows. We have a lot of cabinetry and there are plenty of spaces to hide plates, so the shelves were a fun way to feel like I could have elements of my personality and things that I just love looking at and have collected over the years. Maybe half of the things on those shelves are items that have been passed down from my mother in-law and my mom.

The nursery is so fresh and bright! How did you approach this space?

Because the mantel is so gorgeous, I wanted that to be a focal point. I have the full intention of letting the girls put more of their own sense of self into that space as they get older, so I wanted a room that didn’t feel overwhelmingly themed. [Right now], it’s a mix of cool antique things that are pass downs and more modern elements that make the space feel open and airy. It’s always changing and evolving—but it still feels like a space you can relax in. I hate it when I get myself into too much of a design corner because my taste changes more often than a normal person.

What’s one item that you splurged on that was totally worth it?

Anytime you’re renovating a house, every question becomes, “Do we really need this?” The things that we really wanted to splurge on were the finishing details. For example, getting all of our faucets and shower heads—we got nice Delta faucets in champagne bronze. You use them so much that you really need all of your plumbing to be spot on. Then (this isn’t a traditional splurge), our whole house has a ton of plaster, so instead of drywalling the ceilings, we splurged on having an actual plasterer come in. I think it really speaks to the integrity of the home. Before we moved in, the entire house had dropped ceilings and that’s because all of the original plaster in the house was so cracked. By bringing in a plasterer, we gained a ton of ceiling height.

What’s the one decorating lesson you’ve learned that you’d pass on to others?

When we first moved in, I feel like a lot of people would walk in the house and say something about the wood. Like, “Oh my god, you can never paint this wood!” Or, “Oh my god you can’t do this to the brick.” But, you’re the one that’s going to live there, so it’s just [a matter of] figuring out what you’re going to enjoy. You have to really love it. When I get bored of a certain shelf or a certain area, I treat it as this rotation; allowing those things to be more alive and move around. Another big thing that I’ve learned is the impact of bringing actual life into your space—like plants and even dried flowers. They’re low maintenance but they can make a space or a shelf feel so much more dynamic.

Love this cozy abode as much as we do? You can keep up with Kelly’s ongoing projects on her blog, A New Bloom, or follow along on Instagram.