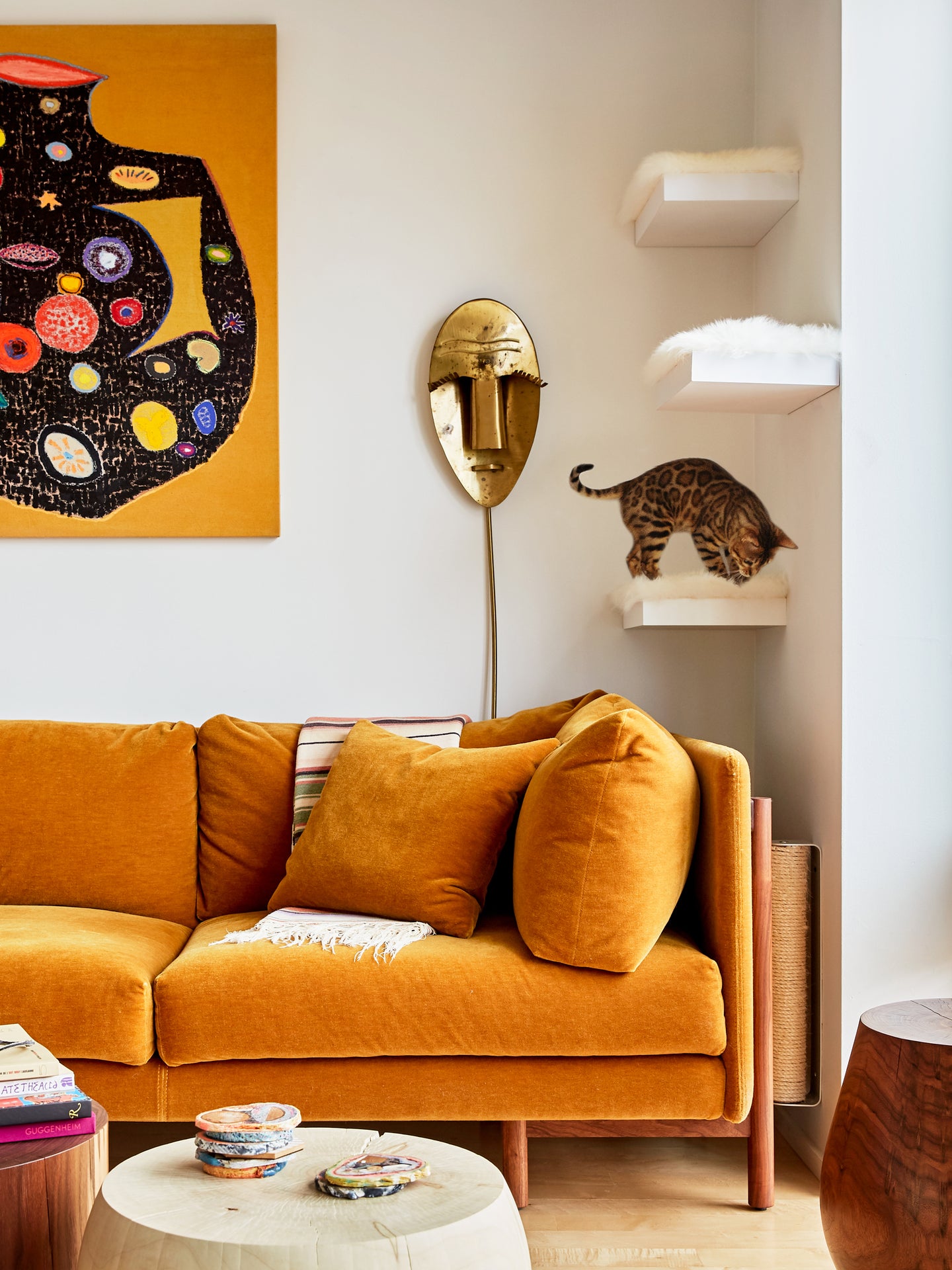 Caitlin Mociun and Tammer Hijazi’s Brooklyn condo is filled with many inspiring custom builds, but, somehow, one of the simplest elements stands apart from the rest: the fur-lined cat shelves that Hijazi built when the couple decided to adopt a young Bengal cat named Miss Cleo.

The shelves, surprisingly, came before the cat—after all, good pet parents know to plan in advance.“We actually installed them before we even got her,” Mociun says. “She’s a Bengal, and we read that they are crazy climbers. I said, ‘Okay, if we get a Bengal, you have to build me a catwalk for the cat.’ That was my one requirement.”

Any cat owner is familiar with the unsightly oatmeal-colored cat towers that dominate the aisles of Petco—which is why this design-minded duo put some extra effort in going the DIY route. “We wanted something that wouldn’t look bad in our house. We looked into completely custom-making it, but we ended up using little wall shelves; the top ones are IKEA. It’s a hodgepodge of store-bought things,” Mociun explains. “I bought sheepskin pieces and cut those to cover the shelves, but in all honesty, if your cat goes on the shelves, don’t do this, because they will slip.”

That’s right: After all the effort that Mociun and Hijazi put into their custom-made cat shelves, their cat simply isn’t a climber. “Cleo has no interest in them whatsoever,” Mociun says, laughing. “She really loves to burrow. She loves to crawl under the covers.” This 1-year-old Bengal’s taste is, like many felines, admittedly a bit lowbrow. “My cat likes trash. We buy her toys all the time, and she’ll see the package they come in and think, Yes! Eventually, I was like, let’s just give her balls of paper.”

Still, Mociun stands behind her decision to install custom shelves for her kitty, and notes that for the right cat—“a cat that’s actually interested in climbing”—they’re pretty perfect. And despite Miss Cleo’s apathy for the custom build made just for her, Mociun admits that the shelves look pretty cool anyway: “That’s the reason why we haven’t taken them down. We thought, okay, we don’t really want to deal with it, but also, they don’t look bad!”