Why Not Use Crystals to De-Stress Your Home? 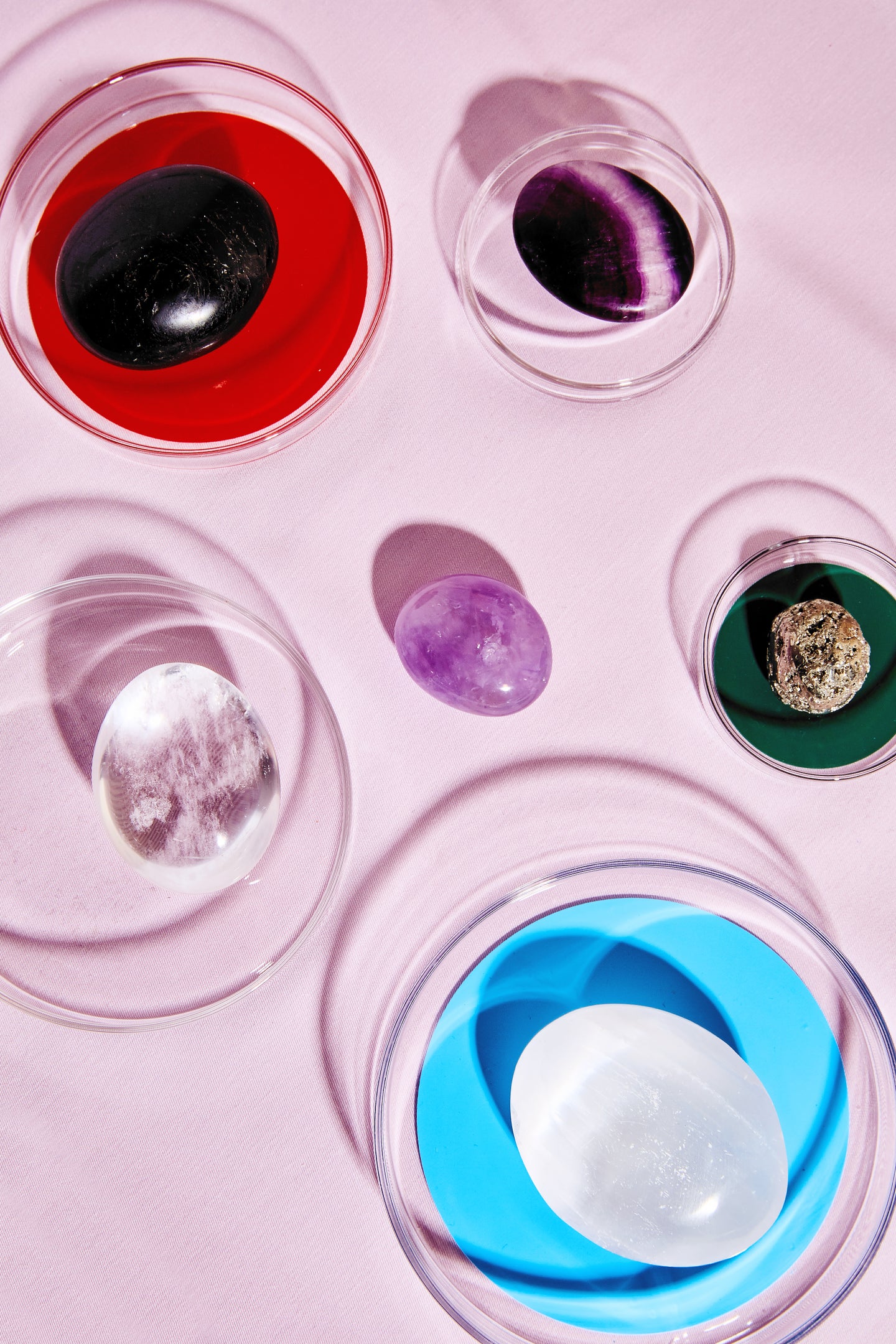 photography by cody guilfoyle, crystals provided by Species By the Thousands

When you’re feeling stressed, there’s no place like home—but it’s a tough situation when your home is rife with negative energy. A stressful environment can rapidly deplete your energy level and make your mind appear scattered. Luckily, though, there’s a metaphysical fix for the problem of bad vibes—and Bakara Wintner, owner of the Durham, North Carolina, shop Everyday Magic, knows just what to do. Get some crystals!

“I grew up in a pretty chaotic environment, and my house never felt safe,” says Wintner. “When I went to college, it was the first time I made the connection between how I felt and how my space was set up.” Everyday Magic, she says, was born as an outlet to help people create their own safe spaces within their homes, using natural remedies that also happen to look pretty: crystals. “Everything we use was derived from the earth from some way,” she says.

Don’t know the difference between carnelian and citrine? Don’t worry (after all, that’s what we’re trying to cut down on here). Below, Wintner shares her guide to the best crystals for stress, and where you should put them in your home.

Wintner always keeps amethyst in big, communal spaces, like the living room. “It is the go-to stone I recommend for people moving into a new space and for people who are seeking protection or purification,” she says. Amethyst promotes balance and invokes spiritual protection.

Selenite, a salt-base form of gypsum, doesn’t attract or retain negative energy, so it can keep the good vibes flowing. “For higher-traffic areas of your house, selenite acts as an energetic air purifier,” Wintner says. She recommends placing it in corners or by entryways or windows.

When entertaining, it’s best to maintain positive energy spaces for guests to mingle. Clear quartz amplifies that. It’s wise to situate this master healing stone in common areas where different personalities might be at risk of butting heads.

For the office: citrine, fluorite, garnierite

Working from home may be a dream scenario, but it also requires you to be mindful about separating work from your living spaces—or it could end up as a recipe for dialed-up stress levels in no time. Place citrine, a self-cleansing stone, on your desk. It amplifies energy and will bring in vibes for good health, wealth, and abundance. “It’s a powerful supporter of the healthy expression of the ego,” Wintner says. Plus, it’s a solid stone for staying focused.

When stressful work projects are at bay, add in fluorite. The stone facilitates a healthy circulation of communication between the heart and mind. “It aids with efficiency, mostly, as it helps avoid disagreements between what the heart wants and what the mind wants,” she adds. “It’s an amazing stone for facilitating interdependence—like having a goal but also knowing when you need to ask for help, [or] understanding your own limitations and when you need external help.”

Garnierite, a newer mineral discovery from Madagascar, is known as the “gambler’s stone” and helps bring people luck. It “helps bring in what you want when your heart agrees,” according to Wintner.

For the bedroom: lepidolite, garnet, carnelian

Lepidolite, a striking lilac-colored, lithium-rich form of mica, proves powerful in the bedroom. Wintner, who keeps it on her nightstand, says that it acts as a mood stabilizer. “It’s basically the mineral form of what is ground up and put into medication for stabilization,” she notes.

Garnet is a solid option to store under your pillow for protection and warmth. “I usually sleep with garnet in bed,” Wintner says. “It rebalances us.” You can also throw a piece of carnelian into the equation for good sexual energy and stress-relieving properties. All you have to do is sleep the night away while they work their magic.

Blue apatite is a go-to for Wintner, as it helps dissolve nervous tension in the stomach. It’s a perfect addition to the kitchen windowsill, as it can ward off gastric issues and tame both undereating and overeating that might result from stress. Rose quartz is a beautiful stone that can add a little extra love into the mix when cooking or baking. How sweet, no?

For the bathroom: larimar, copal

The bathtub, especially when filled with bubbles and salts, is a prime spot for rest and relaxation after a long day. Larimar can be used the same way you would a bath bomb—just drop it into the tub. “It connects women to the water and has high cleansing properties,” Wintner says. “It helps with trauma and abuse, and helps to find confidence. Larimar also just looks better when it’s wet. It wants to be in the water.”

Wintner describes copal, a water-based stone, as having an “ancient Mother Willow vibe to it.” Because it’s resin, it helps remove unwanted stress and such from the body. “It sticks to the thing that might be weighing you down,” she explains. Copal is often added to a bathroom shelf or cabinet to help with digestion issues and is considered a stone of pure beauty. “Put it next to your makeup—it increases sensitivity and helps people celebrate beauty without shame,” she adds.

For wherever you are: black tourmaline, clear quartz, selenite, amethyst, pyrite, fluorite

Of course, if you’re traveling (or even just commuting to and from work), stress can easily build up—which is why you might want to carry a few crystals along with you in a handy little pouch. Wintner recommends black tourmaline as a protective, grounding stone to soak up negativity, and clear quartz to amplify energy and balance the body. Selenite can also work to clear bad energy, while amethyst brings balance; pyrite encourages abundance; and fluorite promotes healthy brain function.

“High-vibration objects always carry within them a story of connection, and crystals are a completely honest, miraculous expression of this world’s magic,” Wintner says. “It’s telling that the most beautiful things our earth produces form under extreme conditions, harsh pressure, and solitude before finding their way to us. There are few stories of connection more universal than that.”

See more wellness solutions: How to Give Your Space Good Vibes in 2019, According to an Energy Healer Should You Add Crystals to Your Post-Kondo’d Home? How to Get the Good Vibes Flowing in Your Home, 24-7