Inside the Creative HQ of Cleo Wade and Elaine Welteroth

The dynamic duo turned a WeWork office into an inspiring kaleidoscopic haven. 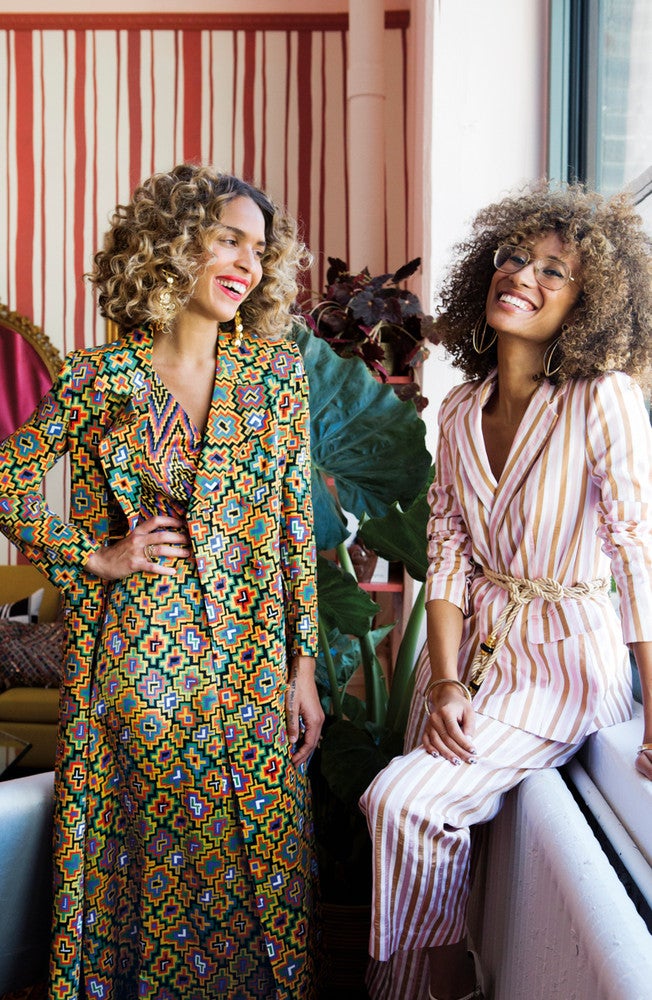 The scene in the WeWork elevator in New York’s Tribeca neighborhood is straight out of a movie about Silicon Valley meets SoHo #StartupLife. This is where small businesses come to sow their seeds. No time to waste: whiteboard, ideate, execute, repeat. You would never guess that tucked away in one of these offices is a spacious, sun-drenched cocoon where writers, creative entrepreneurs, and zeitgeist wunderkinds Cleo Wade (pictured, left) and Elaine Welteroth get some of their best work done.

Inside it’s like a cozy Moroccan yurt smelling faintly of sage, with red-and-white–striped wallpaper, sequined and embroidered pillows, and surfaces covered in crystals and ranunculus. A dusky pink velvet curtain frames a glass wall, keeping the nook hidden from the prying eyes of hallway passersby. On the bookshelves: Zadie Smith, Angela Davis, Cecile Richards, Toni Morrison. Overall, the vibe is radiant as a sunflower.

It’s no wonder the women who brought the space together had an equally impactful first meeting. Their friendship, according to Welteroth, is a “modern day millennial girl crush.” While heading up Teen Vogue, she reached out to Wade about contributing to the publication and received a response right away: “Hi, goddess, can we first have tea at my place?”

Welteroth was taken aback. “I come from the transactional, fast-paced magazine world,” she says. “The idea of stepping out and having tea was decadent and old school.”

That night, she found herself in Wade’s East Village apartment, “dining like queens” on vegan sushi and talking about everything under the sun. “I was wooing her,” recalls Wade. “I had followed her career and was so inspired by her vision. She’s like a lighthouse for youth culture.” They stayed up until midnight.

“After I left,” says Welteroth, “I was like: I will know this girl forever.”

Between them, they also share a lengthy list of accomplishments bridging the worlds of fashion, activism, entertainment, and journalism. Wade’s handwritten pocket-size poems, which she broadcasts via Instagram, have struck a chord with young women everywhere and gained a loyal following of celebrities and influencers.

Her recently debuted best-selling book, Heart Talk, is chock-full of these spiritual mantras. And her poetic voice is not just confined to the page: She teaches a storytelling class at the Women’s Prison Association, hosts author talks at the Lower East Side Girls Club, and recently gave the keynote address at the annual Planned Parenthood conference.

Under Welteroth’s reign at Teen Vogue, where she rose in the ranks from beauty director to becoming Condé Nast’s youngest editor in chief before leaving in January, the publication transformed into a dynamic platform for a new socially active generation. Since then, she has been bringing her fresh perspective to scripted and unscripted TV projects, from a cameo and writer’s credit on Grown-ish to hosting an ABC News special documentary on gun violence that trails the lives of students from Parkland to interviewing Oprah on the red carpet at the film premiere of a Wrinkle in Time.

Although they are on separate professional paths, both appreciate the common refuge they’ve built together. “Our schedules are crazy,” says Wade, “so we wanted a space in which we could be creative and strategic. That felt alive and could feed our souls.”

Potted plants and flowers brighten almost every corner. Layered kilims adorn the floor. On the wall: a mood board of favorite affirmations. And everywhere a kaleidoscope of colors and textures—rattan, leopard, velvet, sheepskin, pinks, blues, mustards, reds.

“She has an incredible eye and is all about more is more,” says Welteroth of Wade, who took the lead on decor. For them, the goal was not just to get “in the zone” but also to host friends and working women. “We live in a culture that celebrates finished products and results, and you rarely get to see inside someone’s process,” explains Welteroth. “I love the idea of cultivating a creative community you trust and admire.”

Next up? Wade is launching a home goods line in early 2019, while Welteroth is penning a book focused on empowering women, out next year. One thing is certain: No matter where their work takes them, the dream team will always return to home base to regroup, recharge, and do what friends do best—be a source of strength and support for each other.

“It’s no longer the era of women competing and comparing,” says Wade. “We’re all about constant collaboration.”

This story originally appeared in the summer 2018 issue with the headline “Two’s Company.”