It’s a daily reminder of where I come from. 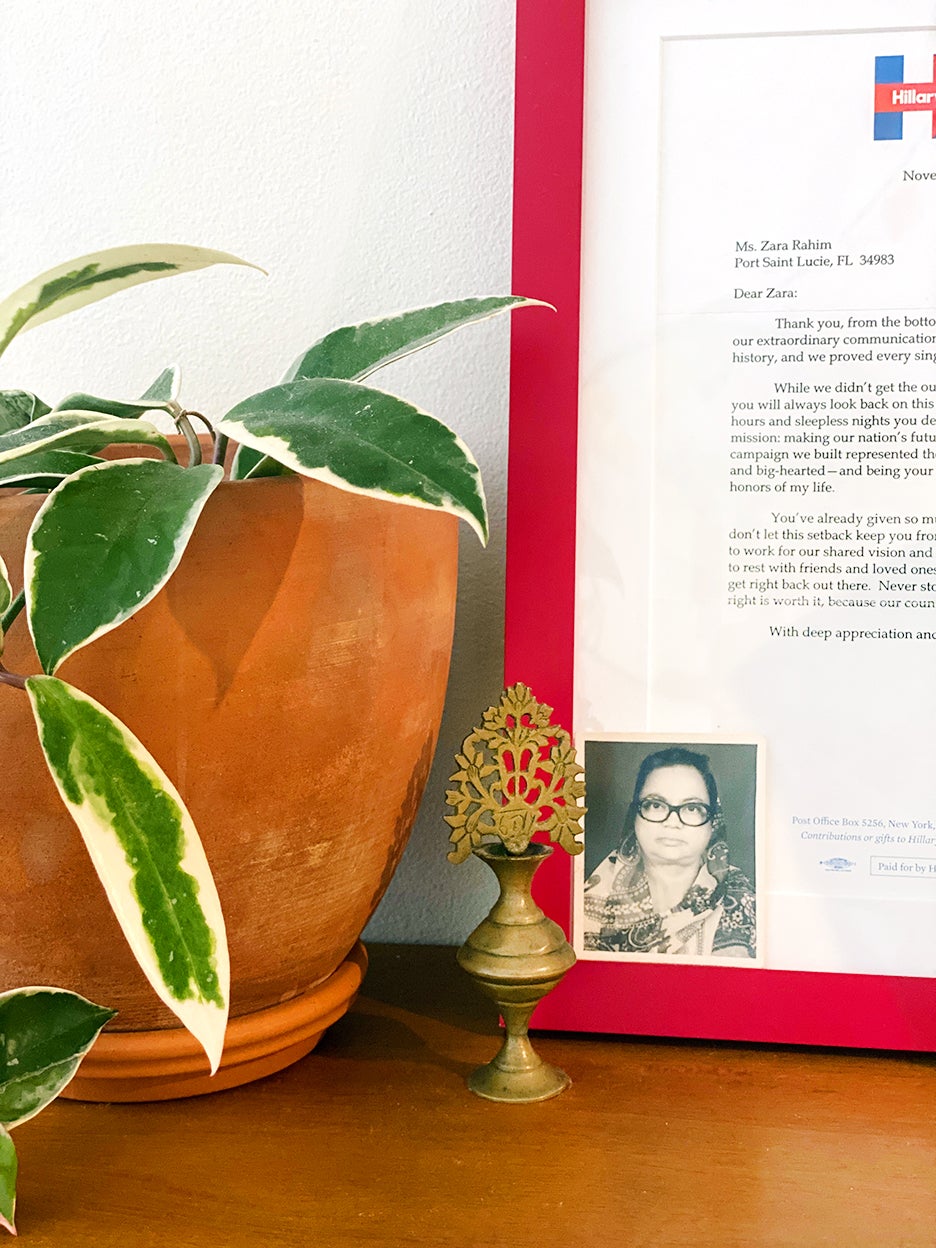 As a child, Zara Rahim was, as she puts it, a contrarian. Raised in south Florida, the communications consultant is a first-generation American—her parents emigrated from Bangladesh in the early 1980s—and while unpacking her multifaceted identity was a long and at times tumultuous process, it was that very curiosity that propelled her (at rocket speed) toward a career in digital communications and political strategy.

After college, Rahim worked under Nobel Peace Prize winner Muhammad Yunus in her parents’ homeland of Bangladesh. “That was my first taste of working on something that had to do with the good of society and bringing practical policy solutions to folks who needed them the most,” explains Rahim. From there it was straight to President Obama’s reelection campaign, where she served as the digital content director out of the battleground state of Florida. She continued her role in the White House’s Office of Digital Strategy before diving into communications positions at Uber, Vogue, and The Wing, with a stint on Hillary Clinton’s campaign in 2016. These days the wunderkind isn’t tied to one place or project. “My work allows me to really flex my social impact muscles,” says Rahim, “but also think about storytelling for the folks that have either needed it the most or have been deprived of it.”

Through it all, Rahim never forgets where she came from, and particularly, who she came from, with a little help from her grandmother’s surmadani (colloquially referred to as a surma) applicator. Here, she tells its story.

The applicator is an object used to apply surma, a traditional South Asian powder akin to a natural eyeliner. This one is from the late 1800s and belonged to my maternal grandmother, Ruby. It was passed down to her from her own mother.

My relationship to my grandmother is really interesting, because I never really met her. I was born in 1990, and she died in early 1991. But I spend a lot of time thinking about her—especially the fact that my mom was postpartum when she died and had to get on a plane with a three-and-a-half-month-old baby and fly across the world to bury her mother. I cry thinking about what that must have been like for her. My grandmother was so young when she passed away; she was 54 years old, and she was 14 when she got married. She lived such an incredibly full life in such a short period of time, but so much of it was not of her choosing. Putting her makeup on with the surma was an act of self-care that was just for her and nobody else.

I think there is an important conversation to be had about the generational trauma that we take on as women, especially as we’re thinking about the choices our ancestors were required to make.

The surma was always in our house growing up. We kept it in this little display case. When I was young, I would always take it out and put the kajal mixture on my hands. You develop a relationship with the things in your childhood home that mean something to you. The surma was the first thing I took that belonged to my grandmother.

Honestly, when I asked to keep it, my mom’s primary emotion was worry. The idea of giving up something like that is challenging. As an immigrant, choosing what to pass on from generation to generation is harder because of a history of war, migration, and loss. She has so few things of her mother’s, so it was stressful for her to part with it.

Now the surma sits on my desk as a decorative piece in my home. It feels so cheesy, but when I see it, I can’t help but remember that I am my ancestors. I look at it and I remember that there was this entire person who lived life to the fullest and used this object so casually throughout her days. It’s something that she probably couldn’t imagine would mean so much to someone she barely knew, but who loves her so much.

It didn’t matter where you came from, or how much money you had, this object was something for everyone. It was part of her self care ritual. It was her heritage and culture — it made her feel beautiful.

I think about how challenging it must have been to uproot your entire existence to come to a country and raise kids who can move through different spaces effortlessly, and I’m so grateful for how hard my mom worked to immerse us in our culture as we grew up. She had to have very mature conversations with us about what people could say to us, and what they couldn’t. She made sure that we spoke Bengali fluently. As a first-generation child, you’re socialized to believe that if English is not your first language, it’s a signal that you’re poor or lower income or uneducated. My mother never stood for that.

Every summer we went to Bangladesh. That was just a part of how we grew up. I often wondered why we couldn’t go to beaches or Hawaii like so many of my American peers, but in retrospect, I’m so thankful for those trips, because they gave me such a deep appreciation for my identity. It was in Bangladesh that I saw my parents become their most pure selves. It isn’t something that you notice until suddenly you do—their laugh changes, the way they move changes, the way they eat changes; you’re watching them revert to childhood, in a way.

It’s really hard for us first-generation kids to feel a similar sense of freedom. We’re taught to dislike ourselves by society or think cautiously about how we move through the world or what our parents look like when they show up at school pickup. We’re constantly trying to figure out who we are. I don’t know if that feeling of freedom quite exists until you are able to get to a place where you love yourself.

I can only hope that one day I’ll get to give my meaningful objects to somebody who exists in a better world because of something I’ve contributed. And that we’re able to think about, especially in today’s political climate, how much people sacrifice to come here. How little they have for themselves, in terms of objects, and what it means to give them up. When it comes to the future, we have no choice but to remain hopeful. There’s no other option.