What Feed the Swimmers’s Jill Fergus always buys at the store. 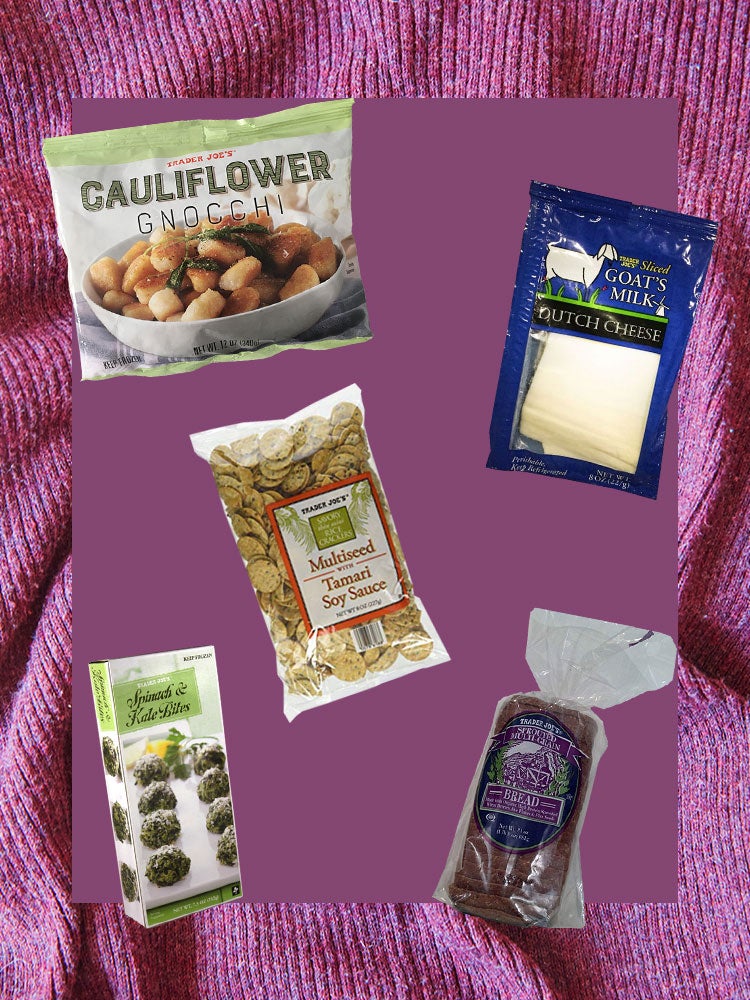 When you’re cooking for athletes, nutritious food takes on a whole new meaning. Jill Fergus learned this firsthand when her children became competitive swimmers, and the unique challenge of creating dishes that are kid approved, energy boosting, and healthy was the impetus for launching her blog, aptly named Feed the Swimmers. She’s a farmers’ market regular and passionate advocate of always eating organic (okay, almost always), and her recipes make up our mood board for healthy-ish weeknight cooking.

From pumpkin bread with maple mascarpone to sweet potato nachos, Fergus’s concoctions are enough to inspire your own trip to the veggie stalls—but in case you can’t get to one, turns out Trader Joe’s is the next best thing. We asked the foodie to share her pantry staples with us, and if you’re in a lunch or dinner rut (read: various iterations on a blah salad), take note.

Your childhood favorite just got a major upgrade. Fergus recommends melting TJ’s sliced goat cheese into your next sandwich. She adds arugula, homemade tomato “jam” (basically smashed oven-roasted tomatoes), assorted pickles, and a balsamic glaze to dress it up even more. “I also use leftover bits and bobs I have in the crisper—fried eggs always welcome!” she says.

“When the kids were younger and I was in a time crunch, these delicious little veggie-packed bites heated up easily in the toaster oven and made for a quick snack,” says Fergus of the frozen spinach-and-kale morsels.

“I like to allow the black sesame to shine through,” says Fergus of the mini crackers. Her favorite way to serve them is with a tahini-laden hummus or a creamy Brie on a chic platter.

Fergus is hardly the first to fall under the spell of cauliflower gnocchi, but her prep method feels fresh. She browns the nuggets in a skillet, then serves them tossed with a big heap of mixed veggies. “I love this when I’m craving something substantial but at the same time want to keep it light,” she says. Pro tip: Make the whole bag so you’ll have leftovers for lunch the next day.

Similar to Ezekiel bread in that it’s packed with fiber and protein, TJ’s multigrain loaf is a lunchtime regular in Fergus’s house. “I love the nuttiness of it and find it best for sandwiches on the go,” she says. She fills hers with as many vegetables as she can pack in—cucumbers, leafy greens, avocado, tomatoes, grilled zucchini, carrots…you get the picture. However, she’s not above a classic PB&J. “Did I mention it makes great toast?” she adds. Consider us sold.