Inside an Airstream reno inspired by “Mad Men.” 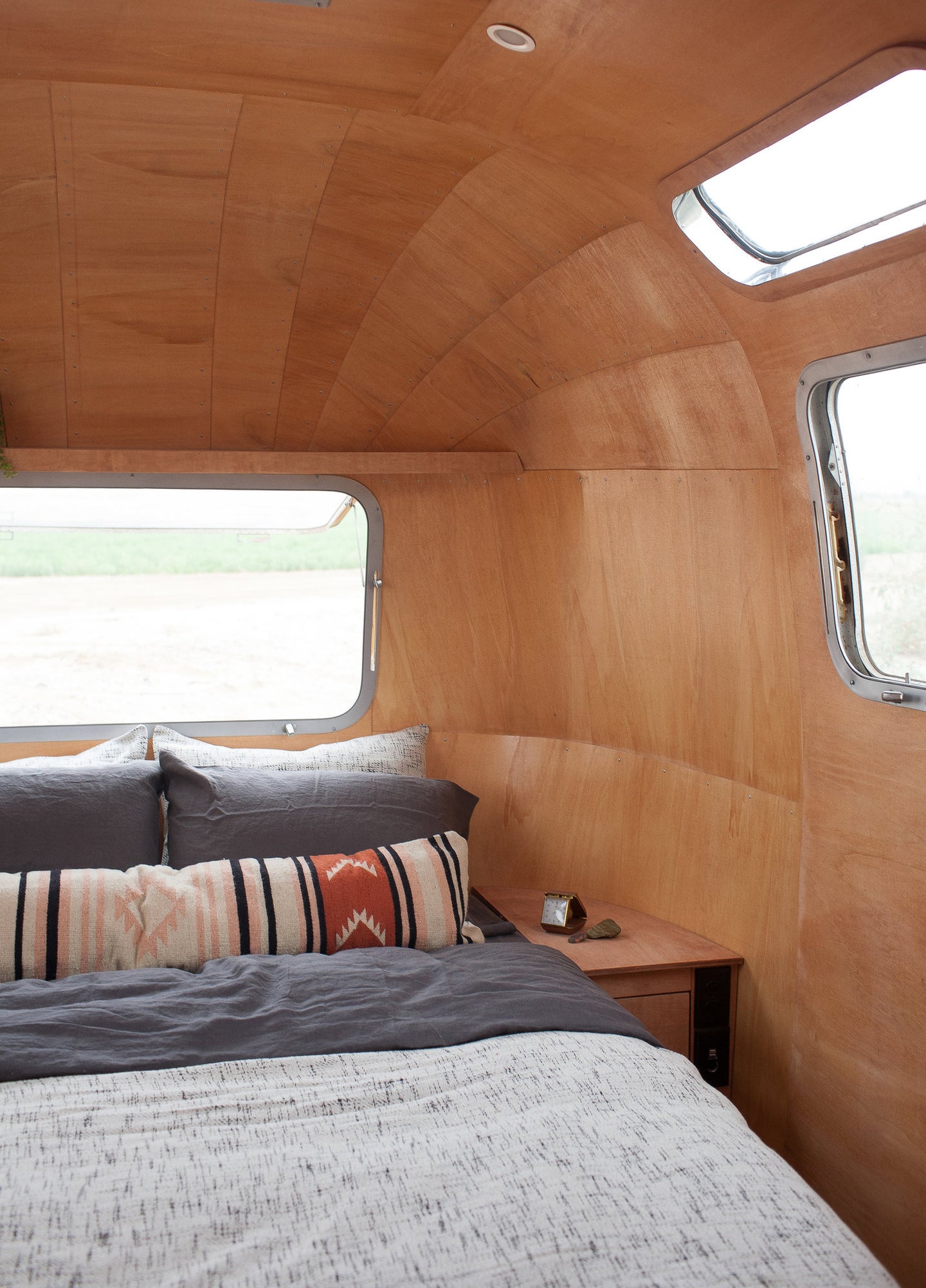 Kate Oliver and Ellen Prasse, the wives–turned–business partners behind The Modern Caravan, had a very specific vision in mind for the redesign of their sixth vintage Airstream. “I wanted the feel of a cigar club on wheels,” says Oliver. “Like the living room of Don and Megan’s apartment on Mad Men.” Big plans for a tiny, long-neglected space—the 200-square-foot travel trailer had been sitting untouched for more than a decade when their Phoenix-based clients tasked them with the renovation.

“The hardest part was working in 120-degree temperatures in an unventilated garage,” recalls Oliver. “The heat in Arizona in the summer is no joke!” During the grueling, multi-day demo, as they waded through the dust and sanded over curse words that had been etched into the interior, the couple realized some of the original features were missing. “It was extremely important to us that the Airstream looked as original as possible on the exterior,” says Oliver, so they splurged on custom fabrications.

The interior is another story. Now clad in bourbon-toned plywood and outfitted with a sleek black sectional, breakfast bar, and queen-size master bed, it’s decidedly contemporary. Here, Oliver walks us through the transformation, from planning the budget to making the final design decisions.

Finding an Airstream Isn’t a Walk in the Park

Oliver and Prasse know better than anyone: Buying and renovating Airstreams is expensive, not to mention unpredictable. The starting price point for a vintage camper is all over the map. The couple once purchased a 1960s model for $300…but they’ve also laid down a cool $17,500 for a 1994 Airstream Classic Limited they found in Indiana.

advertisement
“It was extremely important to us that the Airstream looked as original as possible on the exterior.”

Expect Most of Your Budget to Go Toward the Basics

Hunting down replica parts (or having them fabricated) will certainly cost you, but you’ll spend the most on preliminary renovations just to make the Airstream livable. Off the $16,000 Oliver and Prasse plunked down on supplies and tools for their first-ever Airstream renovation, $14,500 went toward basic upgrades like installing waterproof flooring and adding a new electrical system. To offset those costs, the couple opted for a simple faucet and sink from IKEA and repurposed leftover tiles from a previous house remodel.

“I wanted to strike a balance between a mid-century and modern aesthetic, so the space didn’t feel stuck in time.”

If you want to have all the bells and whistles—air conditioning, custom upholstery, pocket closet doors—expect to spend anywhere between $30,000 to $50,000. This Mad Men–esque makeover hit the tail end of that range.

When You’re Dealing With a Small Space, Choose Your Materials Wisely

Despite having multiple Airstream renovations under their belt, this project was full of firsts for Oliver and Prasse—including the flexible plywood boards they used to cover the interior walls. “The stain was crucial,” recalls Oliver. After all, it covers a good chunk of the Airstream’s surface area. After a few days of testing different mixtures, Oliver chose a finish similar to the tone of the wood found in old Spartan trailers from the 1950s.

“I wanted to strike a balance between a mid-century and modern aesthetic, so the space didn’t feel stuck in time,” notes Oliver. So the pair kept the rest of the design simple, choosing sandy-colored Marmoleum flooring and black solid-surface countertops. Now if only there were room for an Eames chair.

See more stories like this:  We Have a Color Crush on This Tiny Blush Airstream Tiny-Living Inspiration From a 10-Day Airstream Road Trip What These Tiny Hotel Rooms Taught Us About Small-Space Living