Peek inside one couple's "tiny beach house on wheels." 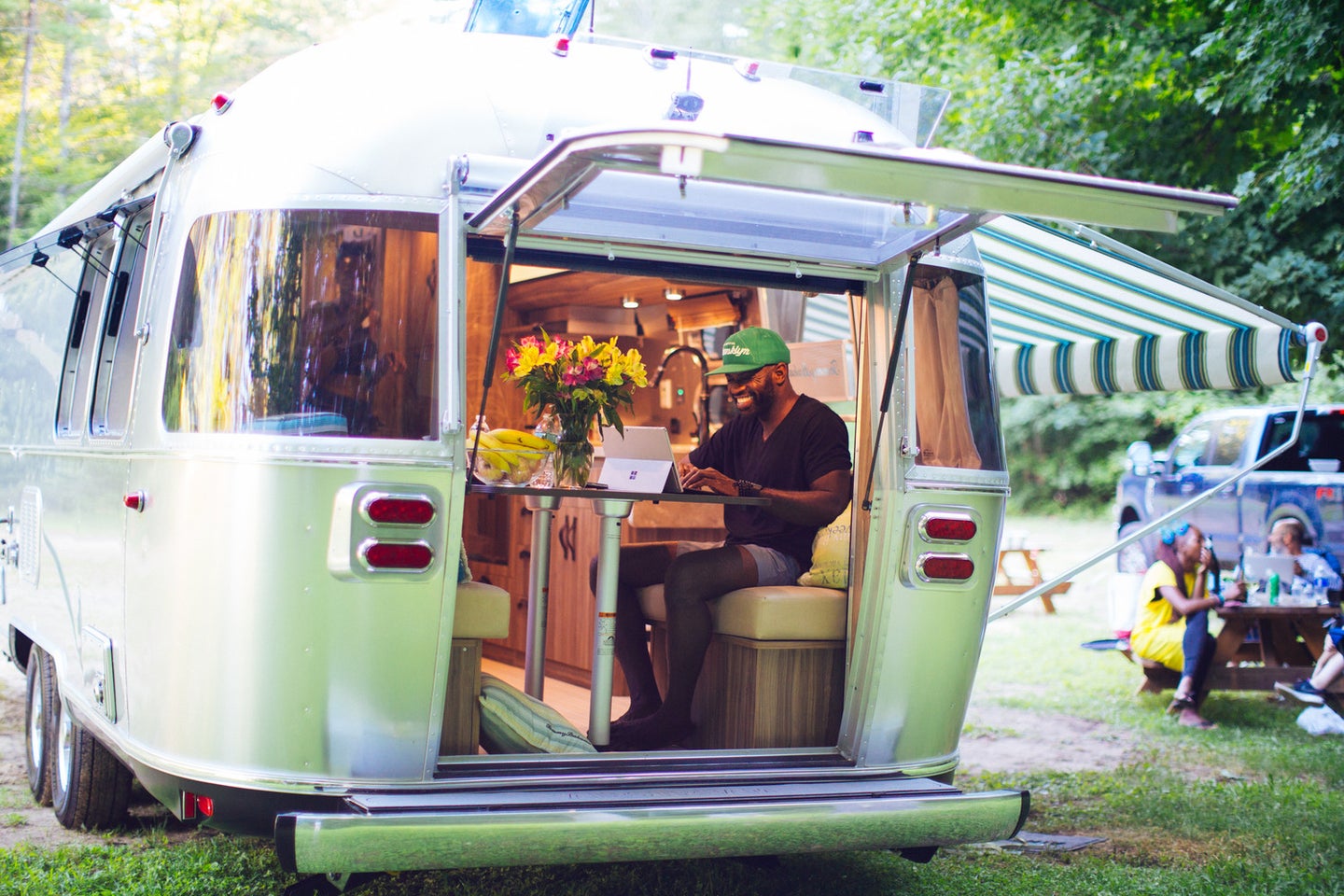 , an architect and Crain’s 40 under 40 honoree, and her partner Chinedu Echeruo, a tech entrepreneur and founder of Hopstop, packed their bags into a special edition Airstream, and chased adventure during a 10-day road trip this summer. Below is Pamela’s diary for five of those epically romantic and imaginative days. We travel along with the magical duo from Upstate New York to Ohio.

Two weeks ago, I left my job of six years as the chief architect and global head of design and construction at insurance giant MetLife, building work spaces that revolved around the human spirit (versus the other way around). I left MetLife because I realized that the work to do in building space for humanity far exceeds physical space. Which led me to the creation of The Love and Magic Company, where my partner in life and business Chinedu Echeruo and I seek to build start-ups that put the human being at the center of work. This has been the scariest, bravest, and most awesome thing I have ever done.

We decided to take a 10-day road trip to get back to nature and us. Airstream and Tommy Bahama collaborated on a special edition travel trailer called the Relax Edition. It’s basically a decked out tiny beach house on wheels. It comes with bright beautiful energetic patterns, creative storage solutions for days, a hatchback, and so much more. Everything from the bedsheets, glasses, sound system, wine holders, ice makers, custom wood shutters, and blinds feels like it was designed just for you. (It even has an outdoor shower!)

We had picked up the airstream from New Jersey to glamp for the weekend with our tribe at the marvelous Rustic Barn Campground upstate in the Adirondacks. I packed two extra large suitcases, and since there are no airline restrictions on road travel, I added about six extra random bags, and one fabulous box for my bathroom stuff.

We were excited! We had to attend a four-hour training session before we could drive it, and we geeked out on the whole thing. It only took us a day to get comfortable, and then the question became who would drive it. We solved this by flipping a coin (Chinedu won and drove.)

We decided to name our airstream Satori, which means sudden enlightenment and a state of consciousness attained by intuitive illumination. We spent our first night in Satori at a truck stop on Interstate 87, somewhere in Upstate NY—but not after a mishap that left us stranded in a gas station for almost eight hours.

In the late afternoon, we pulled into a gas station in NJ and asked to have our truck filled up with diesel, as Enterprise strongly advised us to do. The gas attendant told us he did not think we had a diesel tank. He was adamant, so we told him to pause for a second while we called Enterprise to verify. Somewhere in those moments of misunderstanding, he managed to fill the tank up with diesel. Exactly at the moment when Enterprise confirmed that it is, indeed, a gas tank.

Through another series of miscommunications, we were left sitting at the gas station for seven more hours. It was 11:00 p.m. by the time we were finally rescued by a tow truck driver named Scott, who was possibly the kindest, most understanding person on the planet.

Against the odds, we finally made it to the campground, and the last two days have been filled with some serious glamping and goose-bumping hugs from Mother Earth. We hiked and ate, we swam and fished. We meditated, star gazed, chased dragonflies, and held serious business meetings for our new company, MindMeet, a global knowledge sharing platform that benefits charities.

At Rustic Barn, some of my friends stayed in tents and others in cabins, but overall Satori was the most beloved and most talked about spot. She’s beautiful. She’s proud. The perfectionist in me does not find one thing imperfect (okay, there’s one thing: The wine bottle holders are too small for real wine bottles).

Chinedu and I have had a strong sense that objects take up a lot of attention. When we are weighted by “stuff,” we spend so much time worrying about stuff. Instead, we are choosing to focus on experiences, on the nourishment of our souls. And in the Airstream mantra, we have deliberately and consciously chosen to live life as one long weekend.

Today was more business than pleasure: Chinedu was the keynote speaker at the 2017 Ohio Municipalities Business Conference and Expo in Columbus, Ohio. He gave an inspiring speech about creativity and imagination as a source of unlimited value and wealth—”The first act of creation is in the mind; Before you can do it, you have to think of it. It’s that simple.”—while also sharing the practical steps that he goes through for every startup.

I am titillated that with the Love & Magic Company, I get to co-create with this genius to bring these big concepts to the everyday. To create “space” for humanity to be human. And so, on the continuation of this adventure, I have dedicated my life to a new vision: preparing the workforce for a new era where skills and passion trump pedigree and proximity. There is no better time and no better person to give this a whirl.

Pamela Abalu is the co-founder of MindMeet, which is a knowledge sharing platform with an intention to raise the awareness of our world to include our collective global knowledge. MindMeet is the easiest way for people anywhere in the world to share their knowledge, inspire others, and raise money for charity. Fees are set by the knowledge giver and are donated directly to his or her designated charity. MindMeet offers access to “the right advice at the right time, by the right person.”

Read More About Traveling and Inspiration: