the best mid-century modern design in film and tv

from “mad men” to… the “the incredibles”! 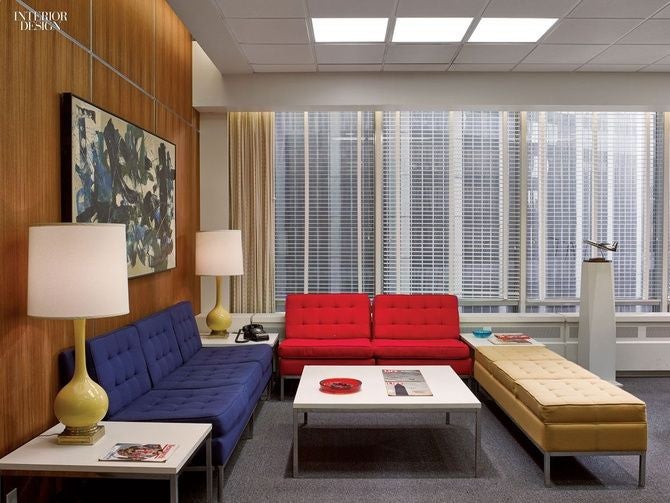 In the 1950s and 60s, a whimsical, futuristic style of architecture and home decor began to dominate the design scene. Marked by simple lines, splashes of bold color, and geometric designs like the classic starburst clock, the look, now known as Mid-Century Modern, is making a comeback in a major way. Hollywood has always influenced design – from fashion to home décor – and AMC’s Mad Men, is a prime example of this today. In fact, the sofa pictured here from West Elm is called the “Peggy Mid-Century Chaise Sectional” – perhaps named for Mad Men’s leading lady, Peggy Olson. Click through to see some fabulous Mid Century Modern designs from films and television shows, both old and new.

Don and Megan’s Manhattan penthouse on Mad Men features a quintessential Mid-Century Modern sectional couch with clean lines and sharp edges. The bold pillows add playful pops of color that are key to pulling off the look.

The waiting room in the Sterling Cooper Draper Pryce advertising office in Mad Men is furnished in with bold, colorful sofas. Note that all the furniture sits low and creates a single plane.

The Jetsons perpetuated the excitement of the Space Race, and with that, created a fantasy of what space-age homes and furniture would look like. Here, the Jetsons lounge in a mod living room.

Holly Golightly shows us in Breakfast at Tiffany’s that you can go Mid-Century Modern on a tight budget. Her couch is actually a bathtub cut in half, but the hot pink pillows and sleek rounded shape fit the look. Animal furs and textures are also a big Mid-Century Modern staple.

The Incredibles live in a Mid-Century Modern home complete with a space-age chair, block bookcase, and a sleek colorful sectional couch.

Mrs. Robinson’s bar in The Graduate boasts Mid-Century Modern features like rounded chairs and a curved counter top mixed with the era’s L.A. aesthetic, which brought in Polenesian elements like the tikis and natural palm backdrop seen here.

1949’s The Fountainhead is about an architect, so the set design had to be impeccable. The screenplay said the architecture of the buildings were to be “the style of Frank Lloyd Wright—and only of Frank Lloyd Wright,” the master of Mid-Century Modern design. As seen here, the interior also followed suit with block furniture and sharp lines.

The 2003 rom-com Down With Love was not a box-office success, but it was successful in recreating the playful feel of Mid-Century Modern design. Shown here, Renee Zellweger’s character lives in a hot pink girly-girl’s dream home. The clean lines and metallic accents make it clear that this movie is set in 1962.

Revolutionary Road offers a grim look into suburban life in the 1950s, but the sets are rife with fun Mid-Century Modern furniture. Here, the living room is outfitted in futuristic-style chairs. The thin wooden legs of the chairs and the coffee table are a definitive marker of the style.