Long associated with mod bubble chairs and Kartell, the transparent material is being reimagined in a kaleidoscope of colors. 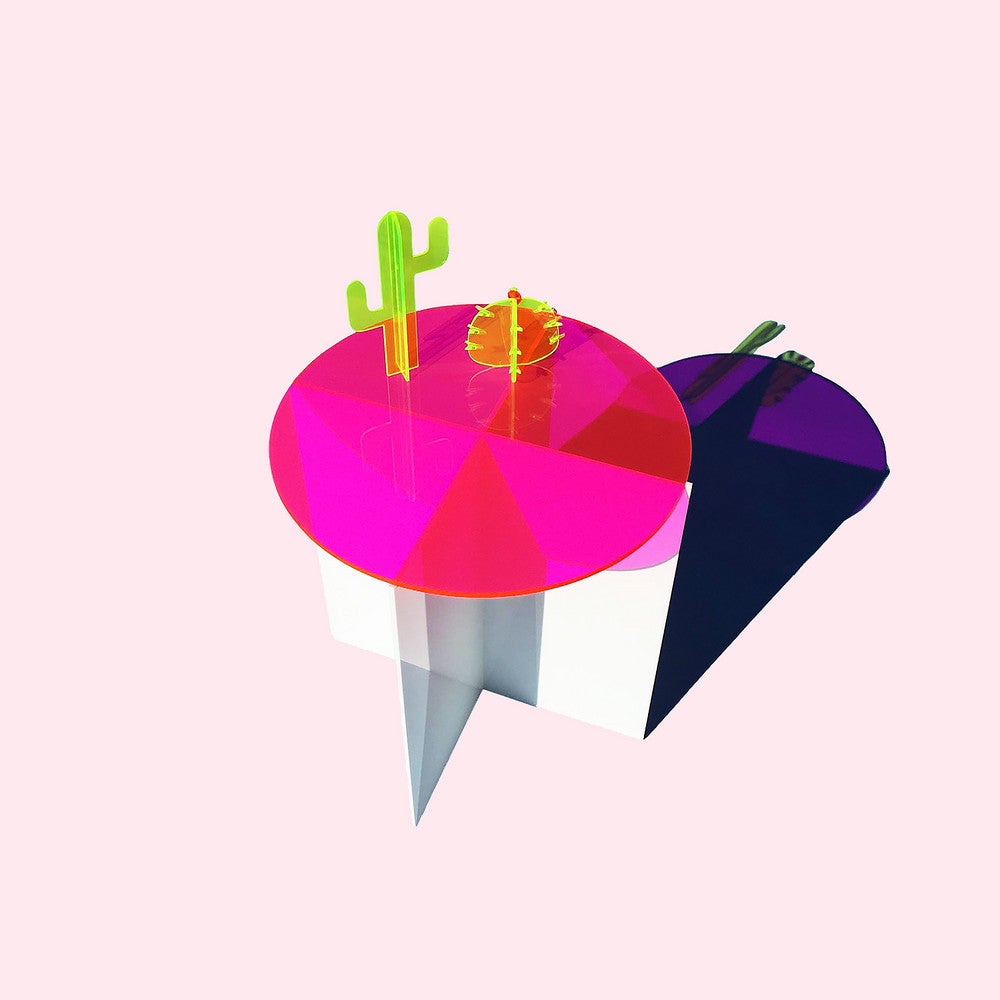 With maximalism rearing its head in nearly everything from Kelly Wearstler’s Ombre rug to Dries Van Noten’s sculpted heel velvet pumps, tinted lucite, an update on the transparent plastic material, is becoming a go-to for decorators who crave balanced spaces with a sheer punch of color. Lucite has “always been such a fun, playful material,” says New York interior designer Tamara Eaton, who recently chose a pair of clear boxes with copper handles, by Jamie Dietrich, for a mid-century townhouse in Park Slope, Brooklyn. “People are doing a little edge banding of hot pink or a totally bright color or something smoky so that you can really kind of play without having it be an overwhelmingly colorful piece.” The new variations of the see-through substance also play well with others: Merging new-school lucite with old world decor, for instance, can instantly lighten a room. Case in point: Fawn Galli, a New York designer known for conjuring whimsical spaces with a fairytale quality to them, selected a Waterfall coffee table by lucite pioneer Charles Hollis Jones to offset the soberness of a monochromatic study on the Upper East Side. The result? A richly layered space whose paisley rug calls to mind Swinging London. Here are three inventive designers producing the best tinted lucite around.

When fashion designer Alexandra von Furstenberg launched her company in 2008, lucite had all but vanished from home design. Still, the former DVF creative director (and ex-daughter-in-law of Diane) was drawn to it—”I just can’t get enough,” she gushes—and opened her first boutique on Melrose Avenue (a 1,500-square-foot showroom on Robertson Boulevard followed last December). Today every piece in her colorful, mostly transparent collection of furniture and home accessories is the result of an arduous manufacturing process, in which every facet is precisely hand-cut, glued, set, shined, and buffed. “It’s very similar to how a carpenter works with wood,” says von Furstenberg, who is averse to using screws, as the goal is to give the illusion of absolute seamlessness. “It’s a dense product, but because it’s translucent, I think that’s what stops you.”Radiant Cocktail Table, available at Alexandra Von Furstenberg.

Scattered across a beige carpet resembling a sun-bleached desert, Nobel Truong’s fluorescent-green cactus garden was a hit at the Architectural Digest Design Show in New York last year. Now Truong, a University of California, Berkeley graduate, who taught herself industrial design only two years ago, “wants to push back on the more traditional means of production” by juxtaposing raw materials like wood and marble with lucite. Deeply inspired by the Light and Space movement of the 1960s and 1970s in Southern California—she aims to explore the relationship between “objects and shadows and the spaces they occupy,” like heroes James Turrell and Larry Bell—Truong sources acrylic samples from local vendors, then uses a small laser cutter to make her geometric, occasionally interlocking shapes, which snap together. “It’s kind of a madness to my methodology,” she says. “I get samples and just gauge which one would pair best with another.”

“I’ve always loved lucite,” says California native Juliette Mutzke-Felippelli, who, with her husband, Diogo Felippelli, goes by the brand name Joogii Design. “It feels vintage, but it can also feel futuristic, which is unique.” In 2015, the former DJs, who live in Los Angeles, set the blogosphere ablaze with a flat-planed, iridescent chair inspired by French house music of the 1990s. Six months later, they expanded their French Touch collection to include a new chair, tables, vases, a paperweight, and sculptural bangles.

advertisement
Building the furniture can take up to four weeks: First, Joe Valiente, owner of Graphic Spider, an acrylic fabricator, cuts the pieces using a CNC machine and plane polishes the edges, then Ely Sorkin—known for his hip-hop-inspired car wraps favored by celebrities like Amber Rose—coats the inner layers with 3M Dichroic Glass Film to deliver that shocking look. The couple then assembles everything in house. “What’s really cool about it,” says Mutzke-Felippelli, “is it has a colorful shadow, so when you take it out in the sunlight, you see all these colors on the ground.”

Get inspired by these lucite finds:

, The Future Perfect, Price Upon Request

All the Reasons You Need a Clear Coffee Table Rebel Girl: Reject Tradition With These Irreverent Designs Is Art Deco the Next Mid-Century Modern?