Dueling Backsplashes Give This New Jersey Kitchen Twice the Personality

Here’s how the designer tied them together. 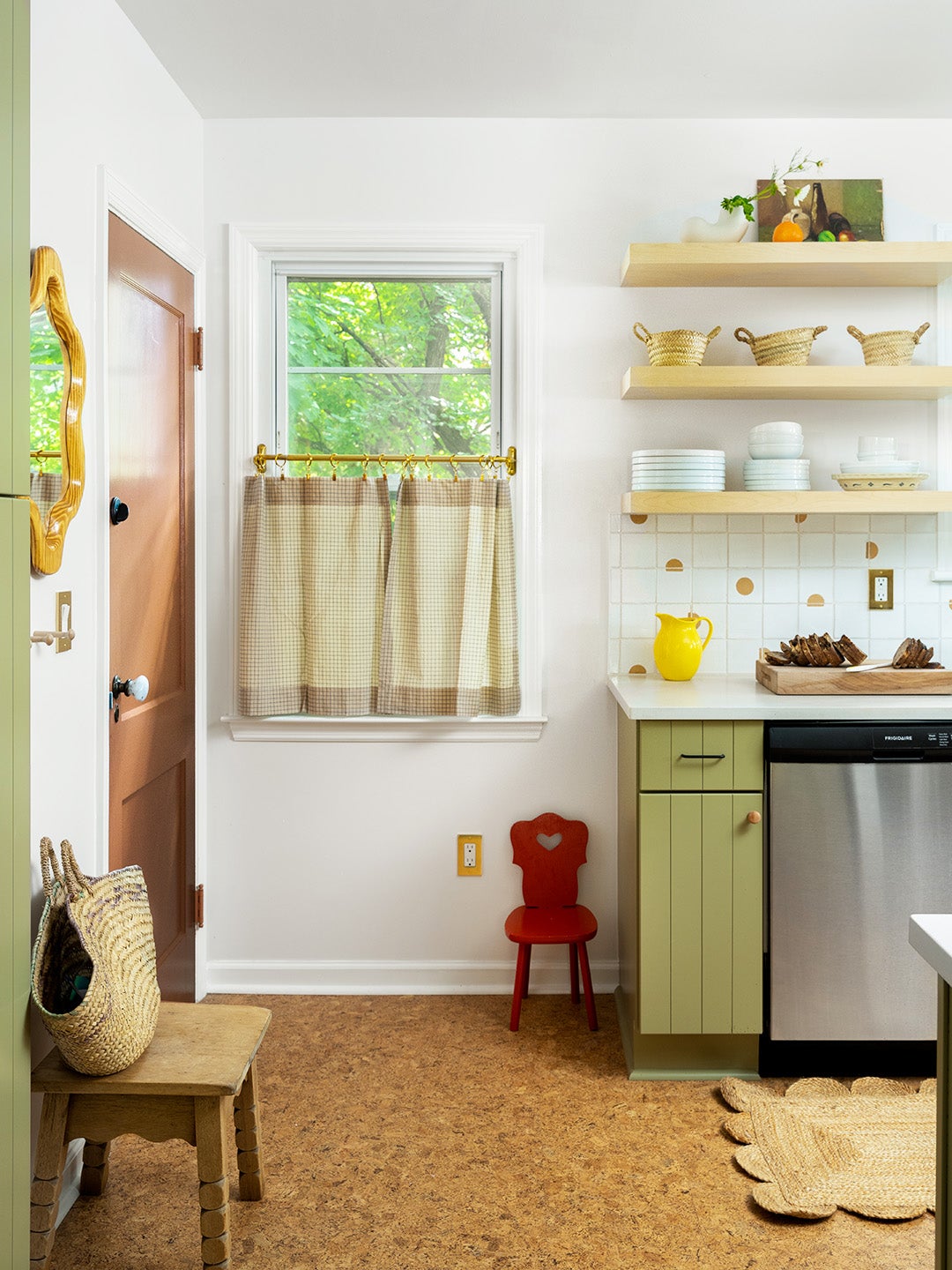 At first glance, the before-and-after photographs of this Maplewood, New Jersey, kitchen appear to illustrate a down-to-the-studs renovation. A closer look, however, reveals the opposite; the transformation is actually a series of clever cosmetic updates.

Recent city transplants Molly Rodau, a leadership and executive coach, and her partner, Daniel McCarey, were eager to make their new circa-1929 home their own—and the previous builder-grade kitchen was the kind of suburban sameness they didn’t want. The couple’s ask to interior designer Hollie Velten-Lattrell was threefold: give the space personality, restore a connection to the property’s original era, and squeeze in a place for casual family meals with their 4-year-old son, Dax. They also hoped to cause minimal disruption in their house in the process, while renovating as sustainably as possible. It was a tall order, but as Velten-Lattrell saw it, a clear one: “We needed to bring the soul back to what had become a soulless kitchen in a really charming home.”

By tapping her local resources, favorite vintage sources, and paint colors from the Farrow & Ball archive, Velten-Lattrell completely reimagined the room with nothing more than a surface refresh. Here’s how she did it.

Keep What You Can

The existing layout, base cabinets, and appliances (which were relatively new) all stayed put. “Gut renovation is like an act of violence on a house,” Velten-Lattrell explains. “And it’s really hard to live through with a family.” So by not going that route, it saved them money, reduced waste, and sped up the timeline.

Rip Out the Uppers and Reface the Rest

To give the galley floor plan some breathing room, Velten-Lattrell suggested removing the upper cupboards on one side, which would also open up the picture window above the sink. (She made up for the lost storage by bringing in floating shelves and a timeworn vintage hutch.)

For the remaining cabinets, Velten-Lattrell called on local cabinetmaker Virden Home to craft new hand-cut paneled doors. “We wanted them to look sort of like old beadboard, so we added a vertical groove,” she says. The designer then had everything painted a gray-green and installed simple Shaker-style knobs: “The opposite of sterile, machine-made, renovation materials,” she notes.

Change the Whole Vibe With Color

Paint alone would have been a game changer, but Velten-Lattrell didn’t stop there. She pulled inspiration from a painting Rodau brought to their first design meeting and found a sunny zellige tile for the range backsplash. For a third major kick of color, she had the doors and trim painted a muted red. Together the three hues create a delightfully untraditional gradient, from orangey terracotta to golden yellow to olive. “I wanted to temper trendy colors with something more of the earth,” Velten-Lattrell adds.

As the couple debated the merits of zellige versus a white tile with beige circles, Velten-Lattrell wondered aloud, “What if we did both?” Rodau and McCarey decided to go for it. The designer stitched the two together by placing a bright yellow pitcher on the side of the space with the more subdued backsplash. On the other, round wood cabinet knobs echo the geometric tile opposite.

The existing kitchen’s countertops and tile floor were not only dated but cold and manufactured-looking. To warm them up, Velten-Lattrell suggested natural cork flooring, which she says “just feels so good on the feet; it’s warm and creates such a nice texture.” For the countertops, Rodau wanted something durable, so they landed on the designer’s go-to quartz from Caesarstone. “It has a really soft, light concrete look, but it’s somewhat honed,” she says (and is way less likely to stain than the real thing).

For Velten-Lattrell, the finishing touch in a room isn’t a final zhuzhing of objects, it’s leaving a “little secret,” she says. In the kitchen, it’s a heart carved into the underside of the antique-inspired custom pine bench with each family member’s initials: “It’s a little bit of rebel sprinkled in.”