An It color range and limewash walls led the way. 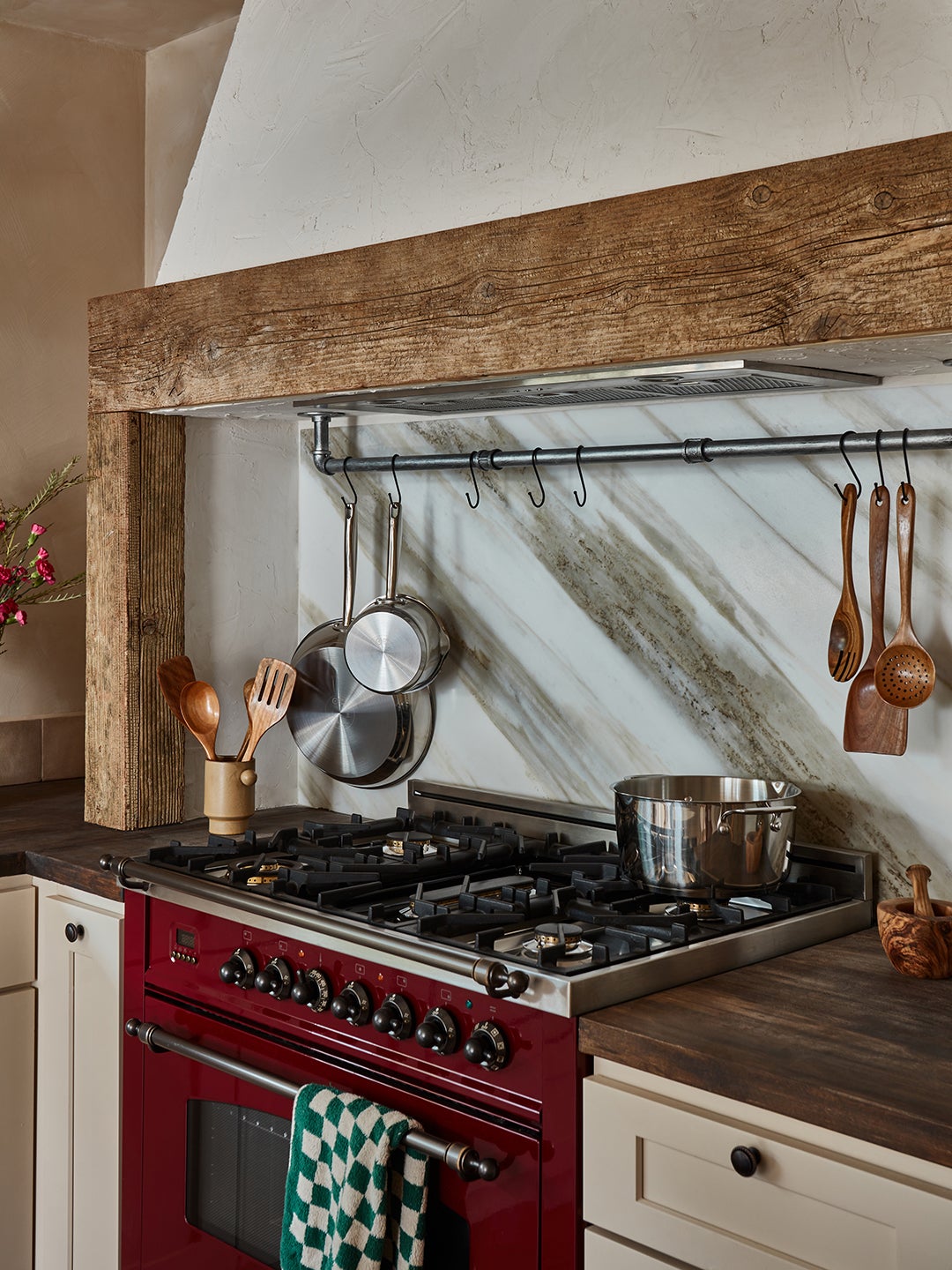 When Naomi Gibson began designing this Cypress Park, Los Angeles, cottage, she fantasized that an artist from the nearby La Beast gallery would buy it and use it for after-parties. So she focused on turning it into a host’s dream home. “It’s unique in that it’s a flat lot that’s 100 percent utilized; there are so many different places to hang out,” she says. Ultimately, a young couple purchased the property just five days after Naomi and her husband, Josh, listed it. Together, they make up the team behind Gibson House, an interior design firm dedicated to renovating and selling houses—but they aren’t your typical flippers. They both have had long tenures in the world of fashion: Naomi was the director of design at For Love & Lemons; Josh owns a factory in downtown L.A. for apparel, screen printing, and embroidery.

“Having such an intense fashion experience gave me a good understanding of color balance and proportion,” shares Naomi. “It was a great background to segue to interiors. I fell in love with the process, switching from silk and velvet to wood and marble.” The circa-1916 Cypress Park home is the couple’s fourth project and one of the easier ones. Despite an outdated interior full of stained wood cabinets and linoleum floors, Naomi was able to keep the overall structure of the 1,136-square-foot house intact. Of course, with a home that’s more than 100 years old, there were some hiccups, such as having to re-level the whole place because of sagging foundation beams and replacing the framing and drywall in the kitchen after discovering water damage. “It’s not fun money to spend, but it’s important,” notes Naomi.

To offset costs, she was picky about where they splurged and where they saved. Going with durable laminate flooring in all the rooms except the bathrooms, for example, made way for materials with bigger price tags, like leathered marble, which is achieved by sanding down the stone so that the veining has more height and the sheen is gone. “It’s nonnegotiable; it’s imperative to communicate romance in a space,” shares Naomi. When it came time to sell, she saved on staging costs by relying on secondhand items from antiques stores (and their neighbor’s estate sale); handcrafted pieces from Etsy; and even some finds from Target, Wayfair, and Amazon. (Psst: The 15-foot-tall potted trees that line the fence came from a mansion in Pasadena that Naomi found on Facebook Marketplace.) Ahead, the seasoned renovator reveals how they pulled off the transformation in just nine weeks.

Naomi found the large wood beams that now outline the red-hot kitchen range at her local lumber yard, but the 180-year-old planks initially came from an Amish barn in Ohio. The designers used the wood, along with Calacatta marble and plaster, to give the space an old-world Italian farmhouse vibe; to make it “feel like it’s always been there. Tuscan-style kitchens have huge wood-burning stoves in the kitchen, so I wanted to emulate that with the hood by making it massive,” she describes. They also added beams to the ceiling of the kitchen to tie the dark wood floors and countertops together.

Continuing the Mediterranean feel, the couple swathed the walls in texture using a technique the Gibsons have used in all four of the homes they’ve redone. The limewash is applied with a wide paintbrush by hand in a cross-hatch pattern, lending depth to the 2D surface. “What I love is that it bounces light around a space. It sets the mood,” she says. Throughout the home, Naomi opted for colors found in nature (though the new owners would easily be able to paint over the limewash if they prefer traditional white).

In one of the bedrooms, the designers used a green-gray hue to mimic the lush garden outside. “I’m obsessed with atriums; I hope to have one one day, and my husband has the greenest of thumbs,” she says. To finish off the space, the Gibsons DIYed some marble hexagon tables by painting them dark emerald.

Some existing elements of the home were in decent enough shape to keep, including the “wobbly” cobblestone patio in the backyard. “I kept it even though it’s un-level and worn because it adds emotion and history,” says Naomi. Paving over everything would have been a shame, especially after they found kids’ handprints with dates next to them etched into the concrete. “I kept that, too,” she says.

For the most part, the backyard just needed a little reimagination. Where there previously was a barbecue area, there is now a fireplace and built-in seating. “I enjoy working with design constraints and repurposing existing things,” she adds. She took a similar approach inside when rethinking the various nooks and crannies. The Gibsons turned an old cubby between the living room and the kitchen into a bar nook, while an old broom closet next to the fireplace became an open shelving area.

In order to remedy the awkward flow between the home’s bedrooms, the designers added an archway between two of them (one of which they staged as an office) to allow a full-circle flow throughout the house. When privacy is a concern, the areas can be separated with a custom-made barn door. “Having double barn doors creates a sense of barrier between two spaces,” she says. “And the arch is soft and welcoming and has more flair. ”

Knowing that her own husband complains about having even lighting when he shaves, Naomi wanted to make sure the light in the bathroom wouldn’t be too harsh for future residents. To achieve perfect eye-level lighting, she had a custom mirror made with soft dressing room–style lights around it. It was designed to match the bespoke marble vanity exactly and required meticulous measuring. In the end, a gallerist is not living in the home, but the new owners are certainly living in a work of art in and of itself.