And the bedroom detail her clients sold her on. 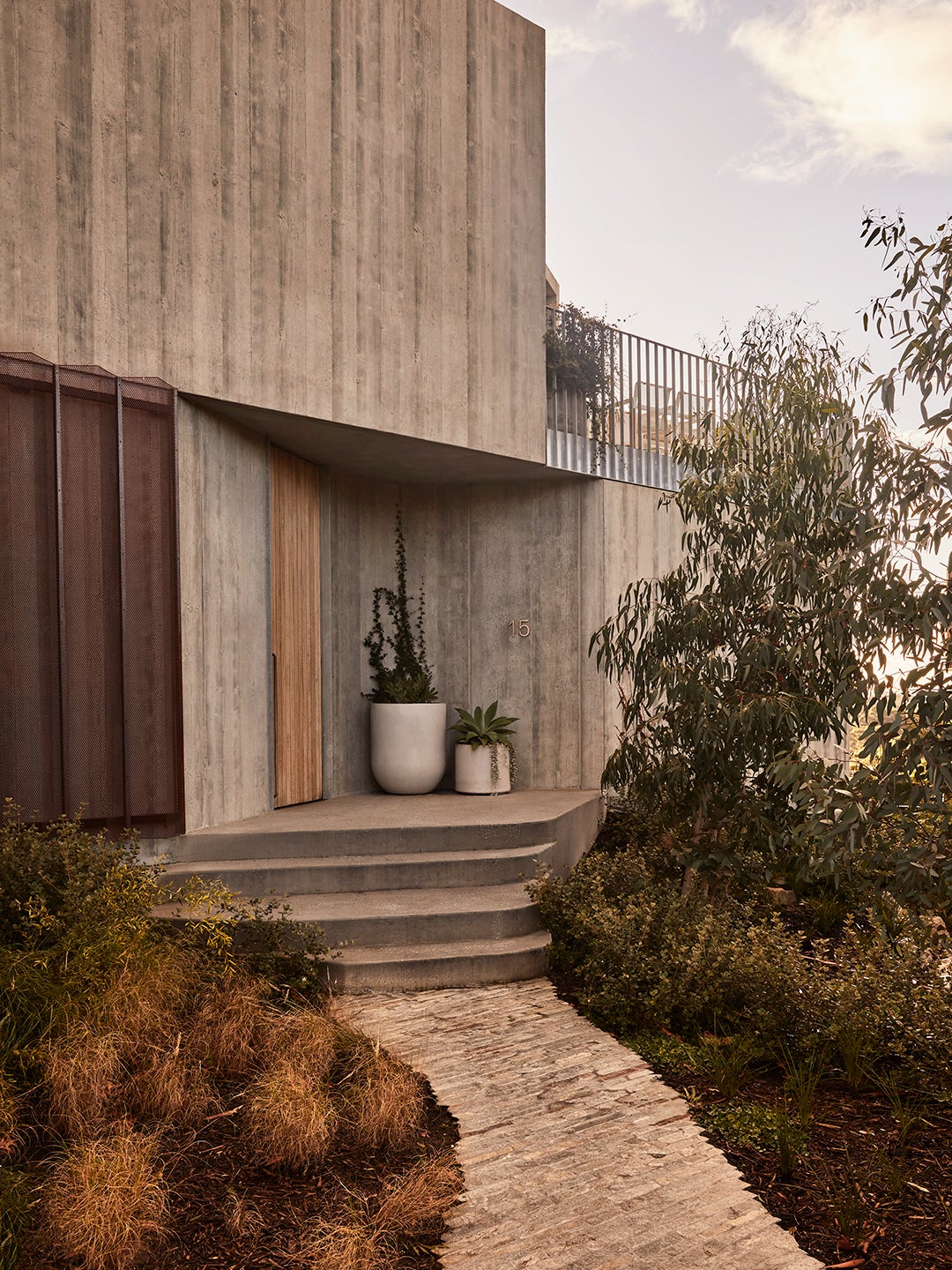 Australian designer and stylist Simone Haag’s latest project isn’t your run-of-the-mill new build. The four-story house had already been touched by revered architecture firm Edition Office and the creatives at Flack Studio by the time Haag stepped on the scene to add the finishing touches. With its curved facade and expansive windows, this development property outside of Melbourne (originally constructed by Angle) pays homage to the suburb’s rich modernist history while also anticipating the next chapter for its homeowners, a family of seven with several grown-up children who have flown the nest.

“This was the ultimate space to furnish,” says Haag. “Not only was the home a melting pot of the best creative talent in the industry, but our long-standing relationship with the owners meant we had established a high level of trust.” Fortunately, her repeat clients had given her a healthy budget to play with, meaning she could make their wildest ideas (like creating a rug that follows the curvature of the walls) a reality. Haag also got to play with the clients’ collection of cult pieces, such as an Arne Jacobsen Egg chair, which she had recovered in a tweedlike fabric. In her own words, Haag shares how she made the interiors of this space as compelling as its exterior.

The design risk that paid off: I presented the idea of putting a camel-colored carpet in the primary bedroom with a pared-back textured grasscloth wallpaper. I’d blocked it from my memory, so when it came time to see the final space, I walked in with my hands over my eyes, peeping through to make sure that I had pulled it off. And thankfully I had. In retrospect, it was a bold move. If it were a chair or coffee table that I had perhaps missed the mark on, I could always take it back into my home. But carpeting a five-bedroom house is a no-going-back moment!

What I’ll take with me to the next project: I avoid duplicating furniture pieces and choices, but there are concepts I’d take forth, such as placing a console behind a sofa. I love how that caps the couch and saves you from always looking at the back of it. We mocked up templates of the rug in the space to ensure it followed the curves of the architecture. I feel that is always a great device to make selections feel truly custom.

The coolest discovery I made during this project: The designs of Hommes Studio, based in Porto, Portugal, walk the fine line between elegant and quirky. The lacquered Malala drawers in the main bedroom were case pieces that work in addition to the existing joinery. They were unlike anything we had seen before.

The thing I couldn’t sell my clients on: There was an artwork by Alice Wormald that drove the tan and electric blue palette—we even had a wall sized to fit it perfectly. I thought it would be a shoo-in, but sadly it didn’t hold its initial appeal with the clients. I reluctantly moved on, and we ended up filling the space with open shelving. However, the homeowner has since confided she has buyer’s remorse and wishes she’d snapped it up.

The detail they had to sell me on: The client persuaded me to reuse the bedside tables in the principal bedroom, which wasn’t my first thought, but now that they’re in the space, it made sense not to reinvent the wheel. That and the TV in the bedroom—she dug her heels in and won!

The biggest splurge: The dining setup took up a considerable chunk of the budget. The family wanted that area to be the heart of the home, with seating that felt loungelike, which is how we landed on the deeply cushioned Fogia Spisolini chairs. The table by Minotti easily accommodates all seven members.

My smartest save: We saved on unnecessary waste by recovering and repurposing some existing pieces, such as the ottoman in the principal bedroom and the Flag Halyard chair in the sitting area. We enjoyed breathing new life into these pieces by way of fresh fabrics and textures. In the basement, I designed a freestanding mirror with hooks and trays for a wow moment upon entry from the garage, but that element got lost in the planning phase. Maybe we’ll circle back to it one day.