A Stone Farmhouse, Civil War–Era Addition, and Stucco New Build Come Together in the Hudson Valley

“There isn’t a sense of departure; it’s just a continuation of spaces.” 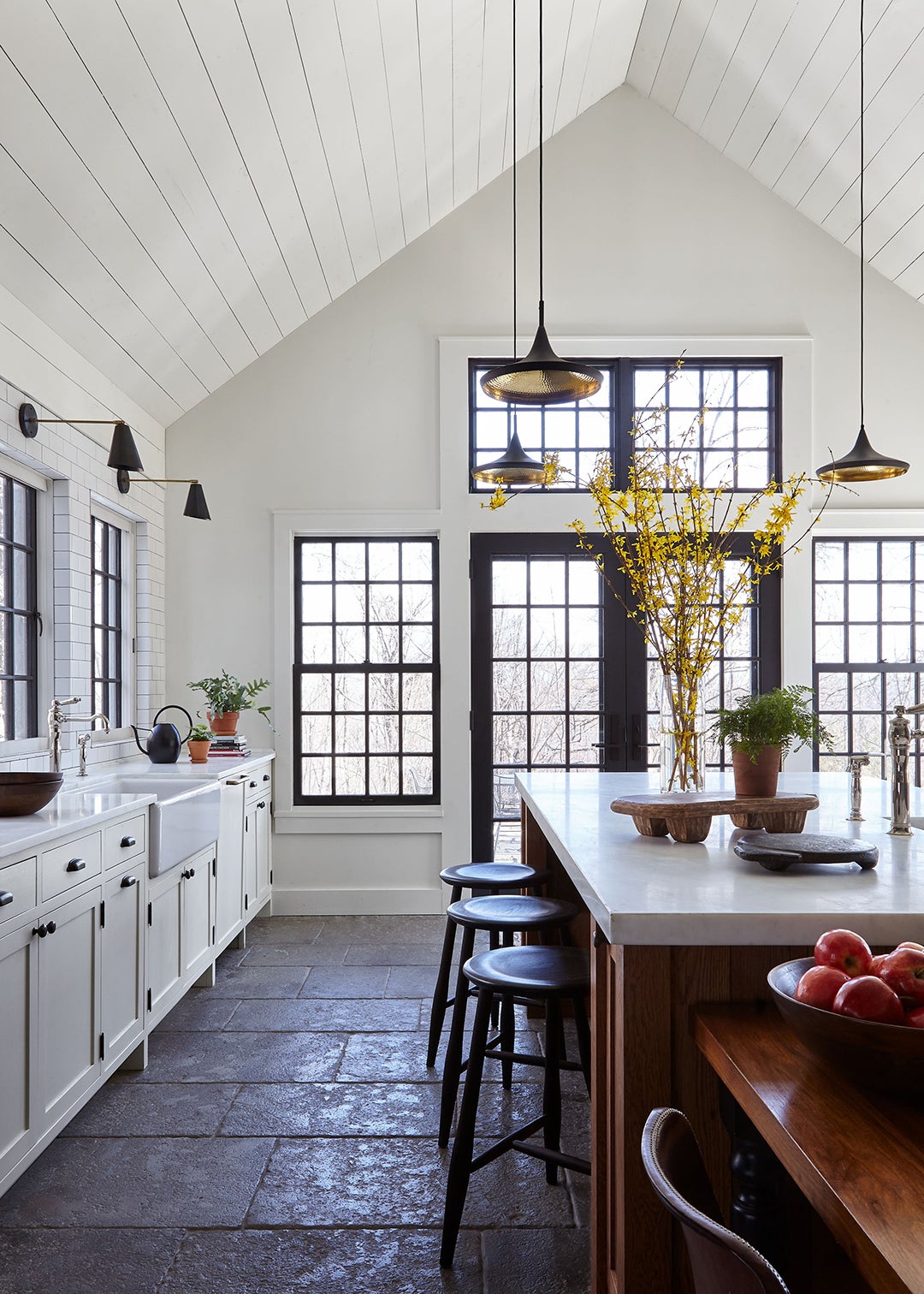 Architects Alan Barlis and Jessie Goldvarg of BarlisWedlick tackle nearly every renovation in phases. But when their clients, the owners of an old farmhouse (we’re talking 18th-century old) in New York’s Hudson Valley, wanted to be able to host Thanksgiving there, the timeline for part one had to be, as Barlis put it, “lightning fast.” It was already summer, and they were celebrating the Canadian version of the holiday in early October.

That meant figuring out how to get the outdated main home on the 56-acre, tree-dotted property, complete with a barn and a free-flowing stream, up to par for a feast. Luckily the project mostly consisted of fresh paint and furnishings (okay, and a new metal roof)—the duo was delighted to discover the original, 20-inch-thick stone walls already naturally retained heat. So they zeroed in on the next task: connecting the farmhouse to two other structures on the property, a wood Civil War–era residence and an eventual brand-new three-story addition.

The firm had never quite encountered anything like the property in Ulster County before. For one, the farmhouse’s front porch was the site of a famous fencing match during the Revolutionary War. “You don’t want to tear it down and replace it, because what’s there is already so amazing—the original homeowners had the choice of billions of acres and this is where they chose to build,” stresses Barlis. “They thought about where the sun is, where the wind blows. They thought about the woods, about the areas where it would be flat enough for farming and their proximity to water sources and views.”

Barlis and Goldvarg’s strategy? Embrace the preexisting patina inside and out. It made sense to preserve and restore the character-filled farmhouse and 1860s dwelling as communal living spaces—those rooms wouldn’t require a ton of energy or updated technology (unlike kitchens and bathrooms). Then it was all about elevating the “cozy scale” of the buildings. The den is swathed in magenta, while the formal dining room is filled with velvet-covered Paul McCobb chairs. Upstairs in one of three small bedrooms for visitors, a poppy red bed-desk combo is a playful contrast to the original sloped ceiling.

Those unexpected details weren’t the only way BarlisWedlick ensured the older sections wouldn’t feel secondary to the modern addition. “As you go from the old to the new, there isn’t a sense of departure; it’s just a continuation of spaces,” notes Goldvarg. The firm focused on using the light as a subtle guide—the windows grow in size from one structure to the next. “In the new parts, you’re just completely surrounded by nature,” says Barlis. Painting all the interiors in similar shades of white further emphasizes the natural flow.

While they didn’t remove any walls in the farmhouse, they did tear down a few in the Civil War–era structure in order to create a large living room (it had formerly held a dining area, office, and pantry). “It’s the main connector between all the spaces,” Goldvarg points out.

The fireplace appears to have been there forever but was actually restored with the help of a local stonemason. It’s a necessary illusion of history: “It announces that you’re on the outside of the stone house,” Goldvarg explains, giving you a sense of place.

Next door, the extension is where the kitchen, primary suite, and an office all reside. Yet it doesn’t feel overwhelmingly large, despite adding 5,000 square feet to the property. That’s thanks to the kitchen roofline’s relative flatness, which also allowed for a deck hidden behind the gables. “It feels as if you’re in the woods and actually almost three stories up,” says Barlis. ”This kind of cantilevered, Ferris Bueller’s Day Off house was in mind.”

Instead of trying to re-create the look of the older architecture, Barlis and Goldvarg chose a contemporary stucco exterior that still works with the farmhouse’s stone facade. Now when you drive in from the country road, you can’t instantly place the home on a timeline. “You’re not quite sure when it was built,” shares Goldvarg. “And it was really, really hard to achieve that.”

Local contractor who knows everybody: Site super Pete Petereit of Cornerstone Construction, who grew up in town.

Stonemason that can re-create the look of a 300-year-old fireplace: Mavella Construction.

Biggest budget win: The metal roof. In the end, it was going to be so much more expensive (and wouldn’t last as long) to save the existing one rather than replace it.