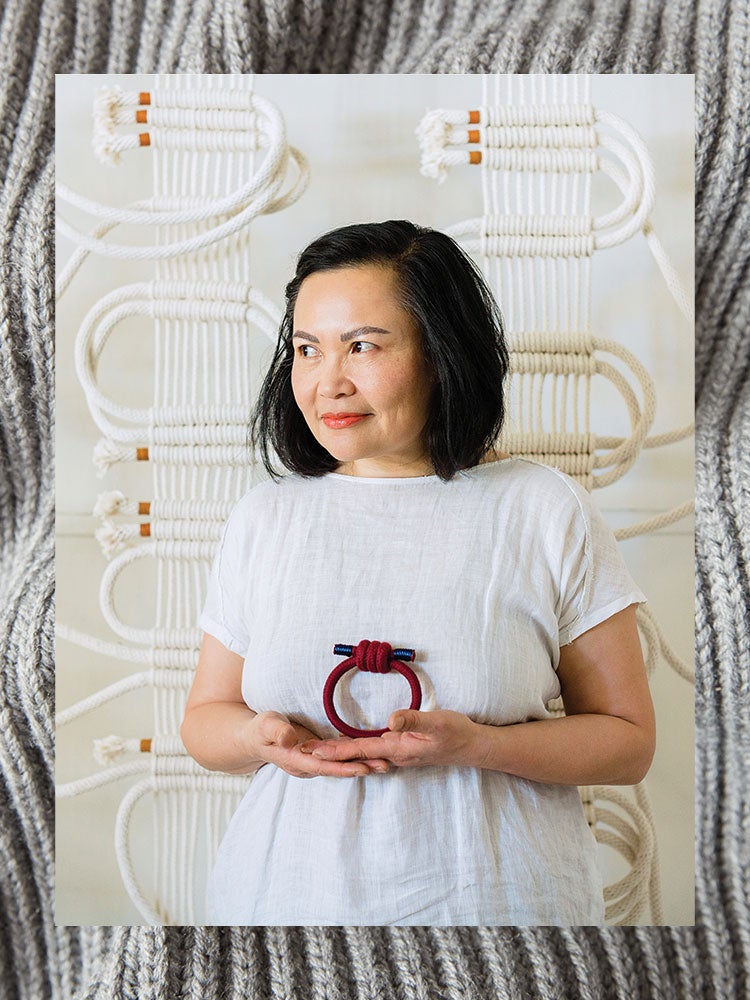 Windy Chien never planned on tying knots. It was a combination of the three-hour commute to her high-powered job at Apple and 20-plus years of fueling other people’s creative pursuits—musicians, app designers, and TV show developers—that led her, first, to a macramé refresher class and, later, to publishing an entire book dedicated to designing everyday objects out of rope and cord (it hit shelves this month). “I was in my mid-40s, and I realized that if I was ever going to have a third career, I needed to get started,” says Chien.

The Year of Knots is an ode to her best-known project, in which she tied one new knot a day for a year and documented the results on Instagram. What her followers might not be aware of is how she got there in the first place. Before the California-based artist even discovered braiding and twisting, she had to devise an exit plan from work; double down on her personal finances; let go of lingering fears; and, most important, plan an overdue, monthlong vacation to Barcelona and Morocco. “I wanted it to be all about me, me, me, and I’m not embarrassed to say it,” says Chien. “I was feeling like a powerful, empowered woman.”

Here, the artist and author opens up to us about what it really means to start from scratch.

Chien decided within a month that she was going to leave her position as an editorial manager at Apple’s App Store. But before giving her official notice, she sat down with a financial adviser to devise a realistic plan. To remove any pressure of bringing home a paycheck right away and to buy time to figure out what she wanted to pursue, Chien set aside enough money to pay herself a monthly salary for one year. Without those savings, the artist admits she probably would have ended up making things she didn’t love.

“You make the choice to go on a creative search once. You shouldn’t have to remake that decision every time you go to pay bills,” she shares. She was apprehensive at first (could she do more than “just squeeze by” in a city as notoriously expensive as San Francisco?), but in the end, her expenses naturally went down. Chien no longer had to fill up her tank with gas every few days, splurge on “hip-corporate-chic” outfits, or distract herself with online shopping. “When you’re happy with your life, you don’t spend money on diversions,” she notes.

She Exhausted All Other Possibilities First

When Chien left her job, she knew she wanted to work with her hands but wasn’t sure what that looked like yet. So for the better part of that year, she signed up for every weekend workshop she could. Ceramics, LED lighting, stone carving (yes, really!)—within five minutes she could tell if she liked the feeling of it or not. Ten-plus classes later, woodworking and macramé were the only two things that stuck. Clearly, the latter won out.

advertisement
“When you’re happy with your life, you don’t spend money on diversions.”

Macramé was it—her calling, her meaning, everything she had left her fancy paycheck and prestigious title for…right? After a few months on her own, Chien noticed that her pieces weren’t all that different from those woven by everyone else. A lightbulb moment struck while she was standing in her backyard woodworking shed, sweeping sawdust: “I needed to learn more knots!” Cue the 365—er, 366 (2016 was a leap year)—days of knot tying. “I was learning a new language and I was becoming fluent in it,” Chien explains.

She Made Room for More

For three months, Chien worked from her living room (pajamas optional), each day adding a new knot to the wall like a notch in her belt. Ready to financially invest in what was no longer just something she did in her free time, the artist found a small studio space a few blocks from her apartment. Finally, she could take her work more seriously, and not in a burdensome way but a “wow, this is what I’m doing with my life” way. “I would highly recommend getting a studio to anyone in a similar scenario,” she shares. “It’s good for your work—you start to see it blossom.”

advertisement
“I was learning a new language and I was becoming fluent in it.”

She Learned to Block Out the Doubts

According to the artist, recognizing fear as a fleeting emotion, not your reality, is the key to all of it. “It will stop you from deciding to make things for a living. It will even stop you from making things you really want to make,” she says. “Don’t give it more power than it deserves.” A business adviser, psychologist, or supportive friend are all great sources when you’re on the fence. Hello from the other side.

See more stories like this:  This Is the First Thing Shea McGee Notices About a Résumé Meet the Designer Who’s All About Giving Back How This Young Design Star Brings Her Wild, Imaginative Concepts to Life