The best thing that ever happened to Haptic Lab’s founder. 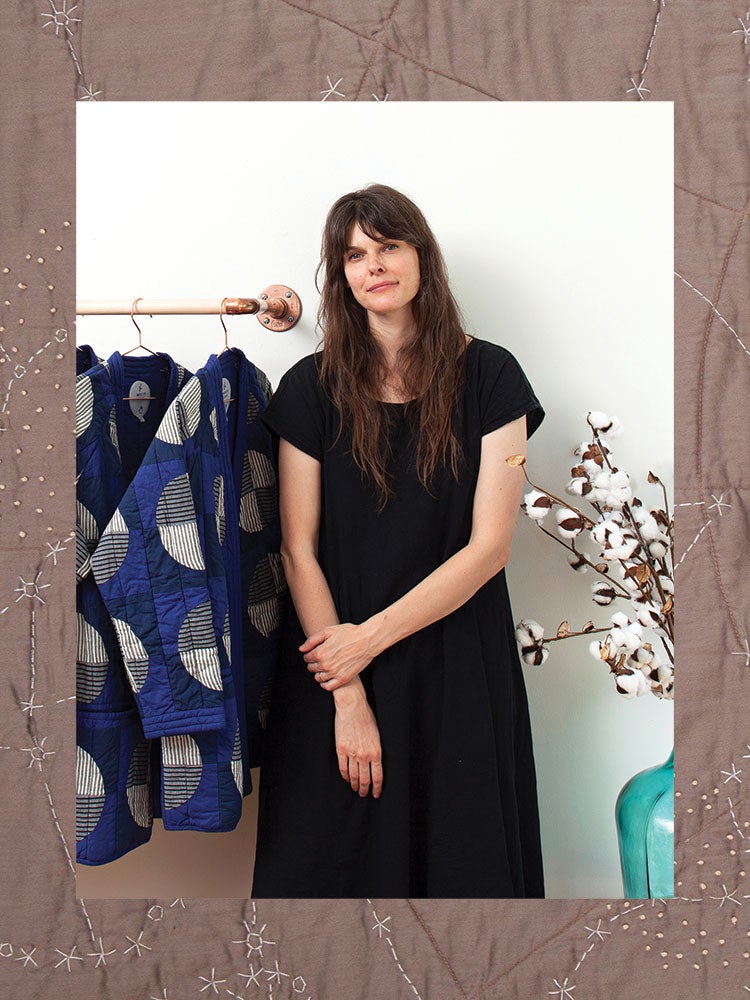 One minute, Emily Fischer could see the future clearly: the high-powered architecture career, the fancy brownstone, the family by age 30. The next minute, it disappeared. “In my mind, I had done everything right,” she says, flashing back to the spring day in 2008 when she was laid off from her job. She had gone to a good school, worked hard, and earned a position at an esteemed midsize firm in New York City. That should have been worst-case-scenario, but now Fischer can’t help but smile.

“Losing my job was probably the best thing to ever happen to me, because it forced me to believe in the strength of my own ideas,” Fischer says. One of the many concepts she toyed around with soon after eventually became Haptic Lab, her Brooklyn-based textile company. It’s best known for its map-based quilts, but the design studio has a lot of other achievements to celebrate as 2019 comes to a close, including a 10-year anniversary, its first-ever apparel collection (the cozy coats launched this fall), and becoming a Certified B Corporation, meaning the production meets the highest verified standards of social and environmental accountability. “It was an accident but also a dream come true,” says Fischer of becoming her own boss. The artist shares what it really means to bounce back from a setback and carve your own path.

She Embraced Being Uncomfortable, but Not for Too Long

Fischer likens the layoff to a punch in the gut. “I had always been so proud to call myself an architect,” she says. “I was wounded.” While embarrassed and anxious, she didn’t let the feelings linger for long. Fortunately, Fischer had built up a ton of back-burner side-hustle ideas during her 20s—bookmaking, street art, and photography, to name a few—and gave herself two weeks to revisit all of them. When she began putting energy into her own work, she saw an immediate payoff. At one point, she went so far as to enter a kite design contest (winning second place), which eventually led to a commission from the fashion label Opening Ceremony. All the positive attention encouraged her to keep pushing for a clearer path. “Without a boss or clients, I was free to get as weird as I wanted,” she says.

advertisement
“Losing my job was probably the best thing to ever happen to me.”

She Put Her Work Out There

Fischer made her first quilt back in 2002 during graduate school. The idea to explore haptics (the sensation of touch) was inspired by her mother, who, at the time, had been diagnosed with macular degeneration and glaucoma and was beginning to lose her eyesight. Fischer wanted to create something that could be used as a mnemonic tool for the visually impaired, with the contours and stitching of the fabric acting like braille. But back then, it was just a hobby.

“When I introduced these first textile maps, my professors told me that if I wanted to get serious about architecture, I should leave my craft projects at home,” she recalls. It wasn’t until years later, during her experimental phase post-layoff, that she decided to enter one of her blankets in Apartment Therapy’s design showcase. When she won the grand prize, she realized her textiles were so much more than a craft—they could sustain a business.

She Didn’t Accept the Norms of Her Old Industry

Fischer doesn’t let anyone categorize her work as feminine, nonserious, or somehow inferior to other design disciplines, a response to how she was treated when she worked in a corporate setting. For instance, a coworker from her former firm revealed to her that the company considered offering her a secretary position as consolation after the layoff. “I’m sure their intention was good, but they wouldn’t have considered the same if I were a guy,” she says. In another job interview, a man told her that he didn’t have any open positions but someone was “sure to be married or pregnant in the next month” and she could have that person’s job. “Like women were disposable, interchangeable,” Fischer says. “I found comfort in craft and textile art because there’s none of that bs. It doesn’t exist.”

advertisement
“Without a boss or clients, I was free to get as weird as I wanted.”

She Asked for Help

You wouldn’t know it now, looking at the seven-person team Fischer’s built—which she calls a “radical feminist organization disguised as a textile company”—but she has been evicted from work studios on three different occasions. Shortly after losing her job, Fisher also lost her apartment (she had been in between places and could no longer demonstrate proof of employment). A friend who owned a coffee shop offered her a gig. The perk: free lunches. “He bought one of the first quilts that I made,” says Fischer. “You fall down and there are so many people to pick you up.”

Fischer adds that the shock of being on her own triggered her survival instincts. She tapped her network of friends for odd jobs and thought fast on her feet during the financial crisis. “I think I really needed the kick,” Fischer says, admitting that, one way or another, she would have found herself in the same place she is today. Though that’s not to say she doesn’t still dabble in her past life: “I have a joke with my husband that I made my hobby my career and architecture my side project. AutoCAD is my love language.” When you’re charting your own course to success, there are no right or wrong directions.

See more stories like this:  I Left My High-Powered Job at Apple to Start Making Art Out of Knots This Is the First Thing Shea McGee Notices About a Résumé How This Young Design Star Brings Her Wild, Imaginative Concepts to Life