The reno that made Leanne Ford an interior designer. 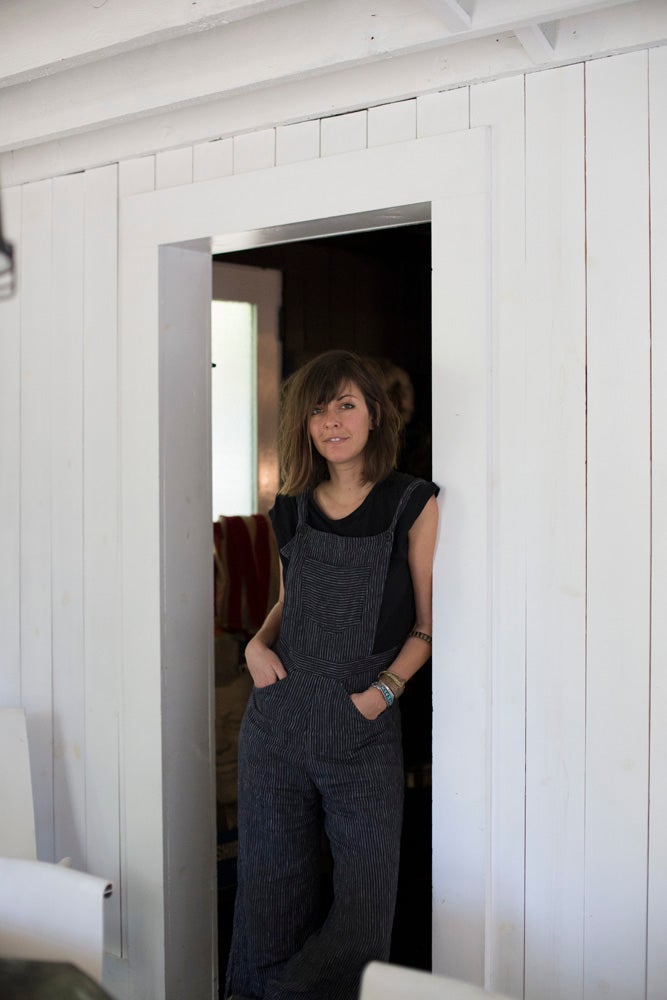 While renovating an old schoolhouse 10 years ago, Pittsburgh native Leanne Ford turned an attic crawl space into a dreamy master bathroom with her brother (and seasoned carpenter) Steve—despite three contractors telling her it was impossible. This was the space that started it all. In their new book, Work in Progress, launching October 29, the siblings–turned–hosts of Restored by the Fords discuss their unconventional path to HGTV stardom; in this excerpt, the two look back on the defining project.

Leanne: People ask me how I got into design. Honestly, it’s all because of one pretty little bathroom. Let me backtrack a bit. In 2010, I moved back to Pittsburgh and found an amazing old schoolhouse located about 30 minutes outside of the city. It was a run-down place and needed a lot of work, but I was inspired because I had been dying to rip down some walls and reconfigure a space. When you really own something, you can do that. You don’t have to ask a landlord for approval.

Fashion was still my bread and butter. I had been styling people for years at this point. When I bought my schoolhouse, I knew the renovation would be a challenge, but I had no idea how inspired I’d be by decorating. All of a sudden, I had a vision, and I had a kind of blank canvas.

One of the bigger visions and harder to-dos was to renovate the upstairs bathroom. It was a tiny little bathroom, which started out as nothing special at all. There was a slanted roof. There was a tiny window that looked bad from the inside and outside; you know—a dinky little shower window with no natural light. It was bad. But the biggest problem I had to figure out was where to fit a bathtub. This was my number-one priority. I was definitely putting a bathtub in that room. No was not an option. I take a bath every day—sometimes twice if I’m lucky!

Up to this point, my then husband and my friends and family and I had done everything ourselves. But we were exhausted, so I decided to do it the “real” way: I called a contractor. Someone came in from a large contracting company. I told him my idea: I wanted white subway tiles. A big old open shower with no curtains. No glass. An octagon-tiled floor and a tub underneath the slanted roof, right there in the shower. “You can’t do that. I’ve never seen that.” Now, you know I don’t take no for an answer. I’ve been this way since I was 10 years old and painting Mom’s refrigerator.

So I spoke to two more contractors. They all said the same thing: “You can’t do that; I’ve never seen that before.” I can’t tell you how frustrating that was. I had a vision. The vision was clear. And I had spent so many years implementing my vision in the fashion world. Now here were these three people telling me I couldn’t do it, just because they said they’d never seen it before. Please. So I was going to figure it out without them. That’s when I called Steve.

Steve: And I took the job. Because, you know, the price was right and she needed help. So I called my friends and made them come over, and [we] figured it out. We worked, but it felt more like a party. It was a fun job.

Leanne: Yeah, I paid them in beer, pretty much. I always had beer and tequila there—drinks upon arrival for Steve and his friends. When they’d leave after working on my house, they’d say, “Thanks. We had a great time!” Or they’d say after a long day’s work, “We got to go home soon, Leanne,” and I would hand them another drink, and they’d stay there for another couple of hours. I’m no fool! But basically, Steve didn’t have a choice. No one else would work on it.

“I had been dying to rip down some walls and reconfigure a space. When you really own something, you can do that.”—Leanne Ford

Steve: I’m not going to lie: I felt the same way that the contractors felt. I stepped into that house and I thought, How are we going to do this? The space was tricky. It was an old house. Everything was a little bit iffy. Everything was outdated, and it needed a ton of work. But anything that Leanne wants is a little trickier than what your average human being wants. It’s more of a MacGyver situation. But in the end, it’s always better and more interesting that way. It’s that little tweak that Leanne puts on something. It’s that push that she takes to make it jump to the next level. I really respect that about her.

Leanne: If I’m the MacGyver of design, Steve is the MacGyver of construction. His problem is he figures it out. If he didn’t figure it out, I wouldn’t keep asking him to do weird stuff. Poor guy. Which is what happened with my bathroom. He—along with an amazing crew of guys—helped me figure it out.

Right next to the existing bathroom was a crawl space and a massive closet taking up space. That was all I needed. I wanted it all gone so I had extra room to play with. I think the reason that I am good at design is that I see it differently. Steve actually said this once, which I loved: “Leanne doesn’t just think outside the box; she rips the box down.” I start over. I see the potential in everything, which was a problem in dating but great in renovating houses.

So we did it: We broke into the crawl space and lost the massive bathroom closet. We put the bathtub under the slanted roof, which was another “problem,” according to the contractors. “You won’t be able to stand up in your bathtub,” they said. “Who needs to stand up in their bathtub?” I replied. To deal with the light, I put this massive full-size window in the shower. Another “no-can-do” from the contractors I spoke to. “You can’t put a window in your shower that big,” they said. “That’s a privacy issue.”

To solve that problem, I hung outdoor shutters on the inside of the shower. They are, after all, meant to be completely weatherproof. It was perfect because I could close them when I needed privacy and open them up when I wanted natural light.

Steve: Her bathroom was a fun, challenging project. It was fun because it was Leanne’s, and it did feel, in a way, like we were playing, like making forts again. Except for this time, I was helping Leanne build her own fort. (Me and a crew of people and friends. Of course, you cannot do this kind of work by yourself, no matter how it looks on television.) She was busy running around the country, working on her styling jobs, and I would FaceTime her as I was tearing the ceiling out. “Are you sure this is what you want, Leanne?” “Yes, tear it out!” Obviously, when we’re taking on clients, that’s different. We cater to what the client wants.

advertisement
“If I designed within the couldn’t-shouldn’t-wouldn’t mentality, then none of these designs would exist. ”—Leanne Ford

Leanne: Yes, because as a designer, my most important thing is to make the client happy. But this time, I was the client. I was my first client, in fact. Renovating the bathroom was definitely hard, but now I had this gorgeous bathroom. If I designed within the couldn’t-shouldn’t-wouldn’t, nobody’s-ever-done-it mentality, then none of these designs would exist. Neither would my newest career path.

We worked on this house for two years. My first husband did most of the labor with Steve and his friends, which I will forever appreciate. But the aesthetics were really mine. (I had designed everywhere I’ve lived since I was 10 years old.) Lose a wall here; lose a ceiling; redo the layout. It was my first time, a total learning experience.

See more stories like this: This Material Is on the Brink of a Major Comeback, Says Leanne Ford How Leanne Ford Made the Most of Her Biggest Bedroom Ever The Best Thing Leanne Ford Ever Bought at IKEA