You can practically feel the stress leaving your body. 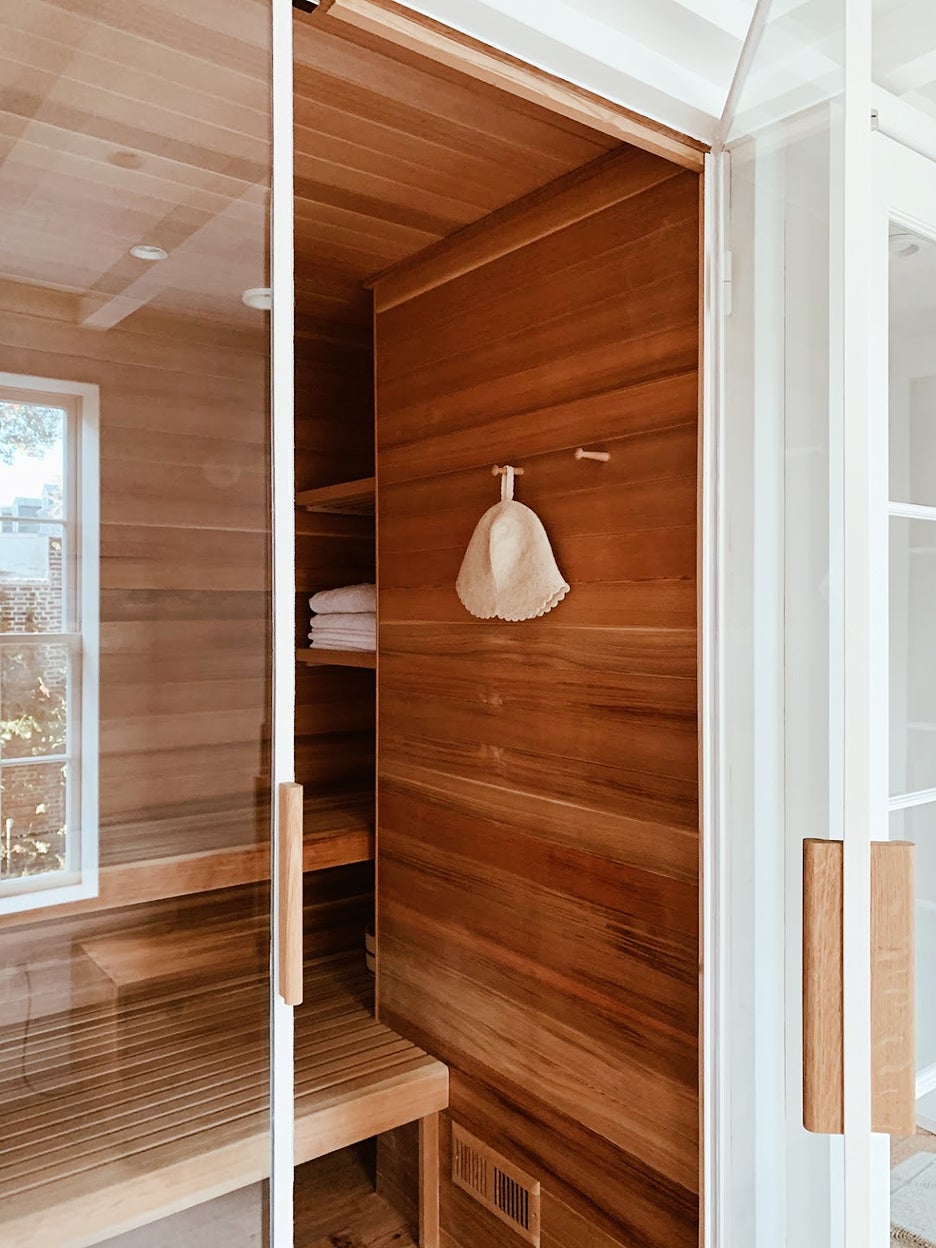 Helen Rice and her husband, Josh, got hooked on saunas through their friend Zach Klein, one of the authors of the now-famous coffee-table book, Cabin Porn. “It actually all started with a hot tub,” recalls Rice. Klein had built an outdoor one at his place in upstate New York, which ultimately inspired the couple—who together run the creative agency Fuzzco and have over the years developed a portfolio of personal real estate projects called Serious Buildings—to construct a Japanese-style one at a property they owned in North Carolina. But then Klein put a full-on sauna inside one of his homes in California. “I was like, oh, wow, it doesn’t need to be this outdoor thing,” says Rice. “It can be integrated into your life.”

It just so happens that the bathroom in the couple’s Charleston, South Carolina, house is extra-spacious. So right next to their new shower they carved out a spot for a sauna. “We can go back and forth, which is really great,” says Rice. All they needed was about 30 square feet to spare in order to make it happen.

Per Klein’s recommendation, the pair purchased a relatively inexpensive kit from Finlandia Sauna (the materials came in around  $2,975, and the heater was an additional $985). The brand shipped all the parts to their house, including the layers of insulation and the aromatic cedar (it’s lightweight so it doesn’t hold heat and burn you when you sit down on it). It also comes with all the diagrams and instructions, such as how high to place the heater and how to frame the pieces that go around it so you don’t accidentally touch it. “It’s pretty straightforward,” says Rice.

The couple’s contractor led the construction (it took around two to three days to complete, with two people working on it), but as Rice notes, “I think it’s reasonable to expect that someone handy could install it themselves.”

The only parts they didn’t use from the kit were lighting and doors. The former was a decision made with consistency in mind: Rice wanted the fixtures to look like the recessed trimless ones that were already installed in the rest of the bathroom (including the toilet stall and the laundry nook, which is also in there). “And I wanted to be sure that the bulb temperature was going to be the same,” she adds. They tasked a local company with designing the powder-coated steel doors, complete with sleek glass panels that offer uninterrupted views of the space and mounted screw-on Shaker pegs that are handy for hanging wet running clothes.

Tackling this project at the very beginning of the pandemic was a game changer. “It’s definitely been a form of entertainment in a way,” says Rice. After working from home all day, the pair might pop in there to get away from their devices. “We’ve had four people in there at one point,” she shares. There are two benches to sprawl out on, plus shelves stocked with towels.

The space gets a lot of use in the mornings, too. Rice can set the timer the night before so it will start to heat up and she can jump in before moving on to a cool shower. (Don’t worry: The heater automatically turns off after an hour.) “If I don’t want to exercise that day, I’ll get in there and get my blood flowing a little bit,” she says.

Also on standby: a protective cap that helps regulate body temperature. After all, saunas are hot—literally.