Plus the best use for a built-in bookcase yet. 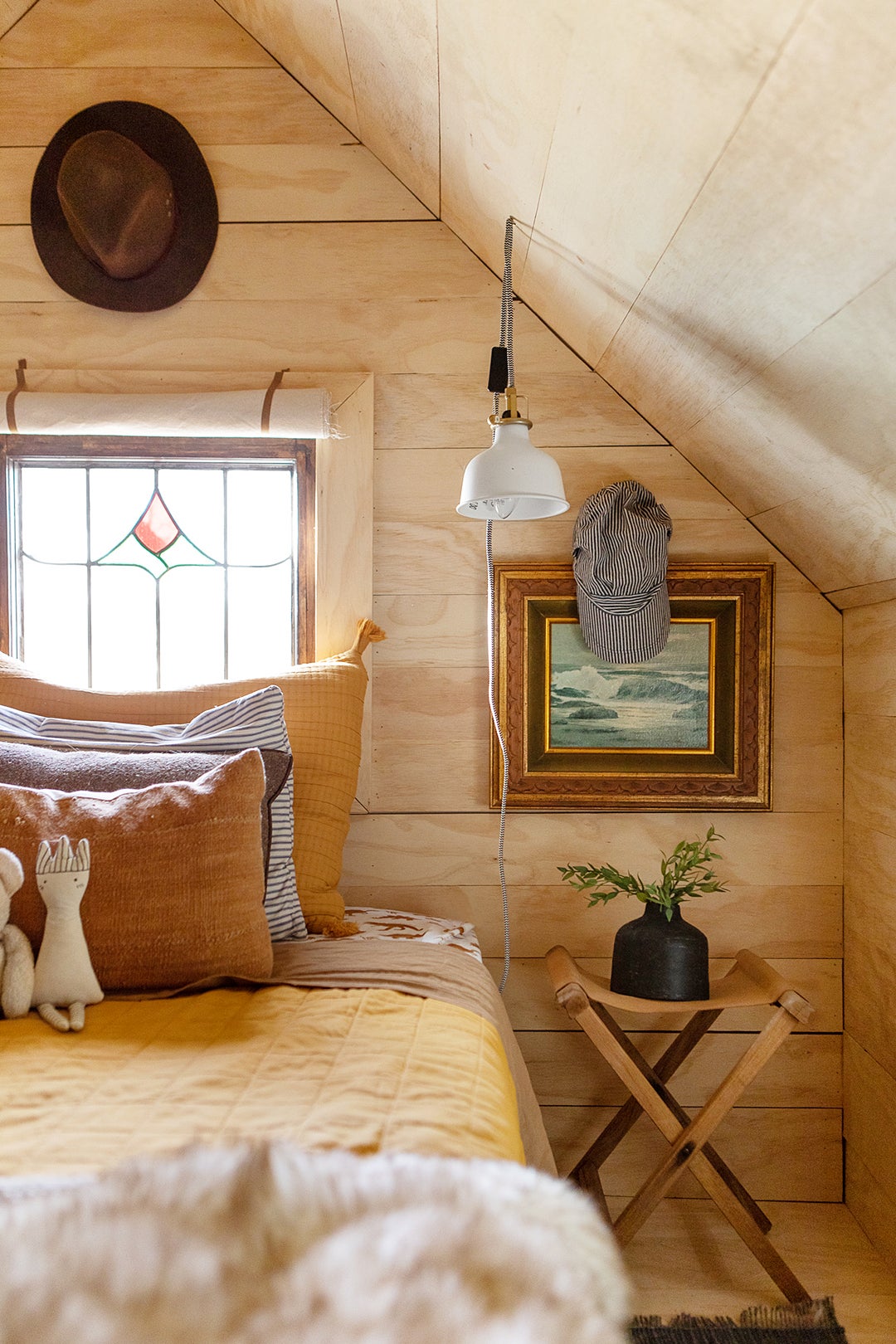 Ginger Curtis never planned to live in her circa-1901 home in Fort Worth, Texas, as is. But when the architectural plans came in for the full-scale renovation she had intended, the Urbanology Designs founder realized she would be left with none of the original house that she’d fallen in love with. So she pivoted, deciding to move her family into the home and remodel it bit by bit. The challenge: fitting her family of seven into the three-bedroom structure. She’d need to make use of every corner of the existing house without expanding the footprint.

The sleeping arrangements were particularly tricky. Ginger and her husband, Eric, took one bedroom; their older daughters, Madison (17) and Lilly (18), got another; and their daughter Avery (11) and youngest son, Asher (8), found themselves not-so-happily sharing the third room (the couple’s oldest son, Tyler, is stationed overseas with the Navy). Then inspiration struck: Ginger realized she could turn an unused space at the top of the staircase into a sleeping nook for Asher. However, it would take some work to transform the micro opening, with its tired carpeting and utter lack of charm, into an inviting room.

As veteran DIYers, the Curtises knew they could tackle the project on their own without professional help. First, they paneled the whole alcove in wide planks of maple they cut themselves. Then Ginger tapped Asher’s 8-year-old interests for decor inspiration—weaving his love for both dinosaurs and Indiana Jones (hello, safari tent curtains!) into the room. Here’s how she transformed the former storage space.

Warm It Up With Wood

“It’s such a small space. I stuck to one material for all the surfaces because I wanted to keep things uncluttered and not too busy with many transitions of materials,” says Ginger of the maple planks’ simple wood grain. “I didn’t want a heavily striped pattern or something that would have overwhelmed this tiny room. Maple’s light but neutral color feels very organic yet still cozy.”

If you want to turn a standard kid’s room into a place where imaginations run wild, Ginger says to focus on one key piece of visual drama—an indoor hammock, say, or a ceiling wallpapered with cranes in flight. Here, that element is the drapery that encloses the alcove. “Asher said he wanted it to feel like a fort, so I came up with the idea to make curtains out of canvas drop cloths,” she explains. Nailed directly into the ceiling, they close the nook off completely. “It looks like a safari tent when you’re sitting on the bed peering out,” she adds.

Ginger was lucky to have the built-in shelves in this space, but even a basic bookcase can become a smart storage spot with the right bins. Here, soft rope containers hold the bulk of Asher’s clothes, creating an uncomplicated closet system that’s easy for a kid to maintain. Toys are stashed in sturdier wood bins and woven baskets. Who needs a wardrobe, anyway?

The designer also added wheels to Asher’s custom platform bed, so she can rearrange the room to fit his needs. “If he wants to play, with one finger you can push the bed so it goes completely flush against the wall and opens up that whole front of the room for a little activity zone.”

If your child has a hankering for a themed bedroom, Ginger suggests catering to their interests with something one of a kind. In Asher’s room, she nodded to her son’s obsession with Indiana Jones by hanging her grandfather’s hat (a dead ringer for Indy’s) on the wall and displaying an antique three-face clock on the shelf. Likewise, she recommends scouring eBay and Etsy for vintage wall art: A throwback Batman poster will satisfy your kid’s wants and still vibe with grown-up decor sensibilities.

One of the first things on Ginger’s renovation punch list: the unsightly can lights, which were an impractical choice for the low ceilings. “They were so ugly,” she says. To avoid the cost of hardwiring sconces, she opted for a cozy plug-in table lamp and hung an IKEA clip light from a hook next to the bed.

The mustard quilt and buffalo-check throw are neutral enough to pair with a variety of sheets and throw pillows, including the subtle dinosaur-pattern linens that make her son smile. For themed (but not coordinating) bedding, Ginger prefers understated prints to in-your-face motifs. “I didn’t create a whole green dinosaur theme,” she says. “It’s just this little moment of pattern.”