A Narnia-like cubbyhole is a major bonus, too. 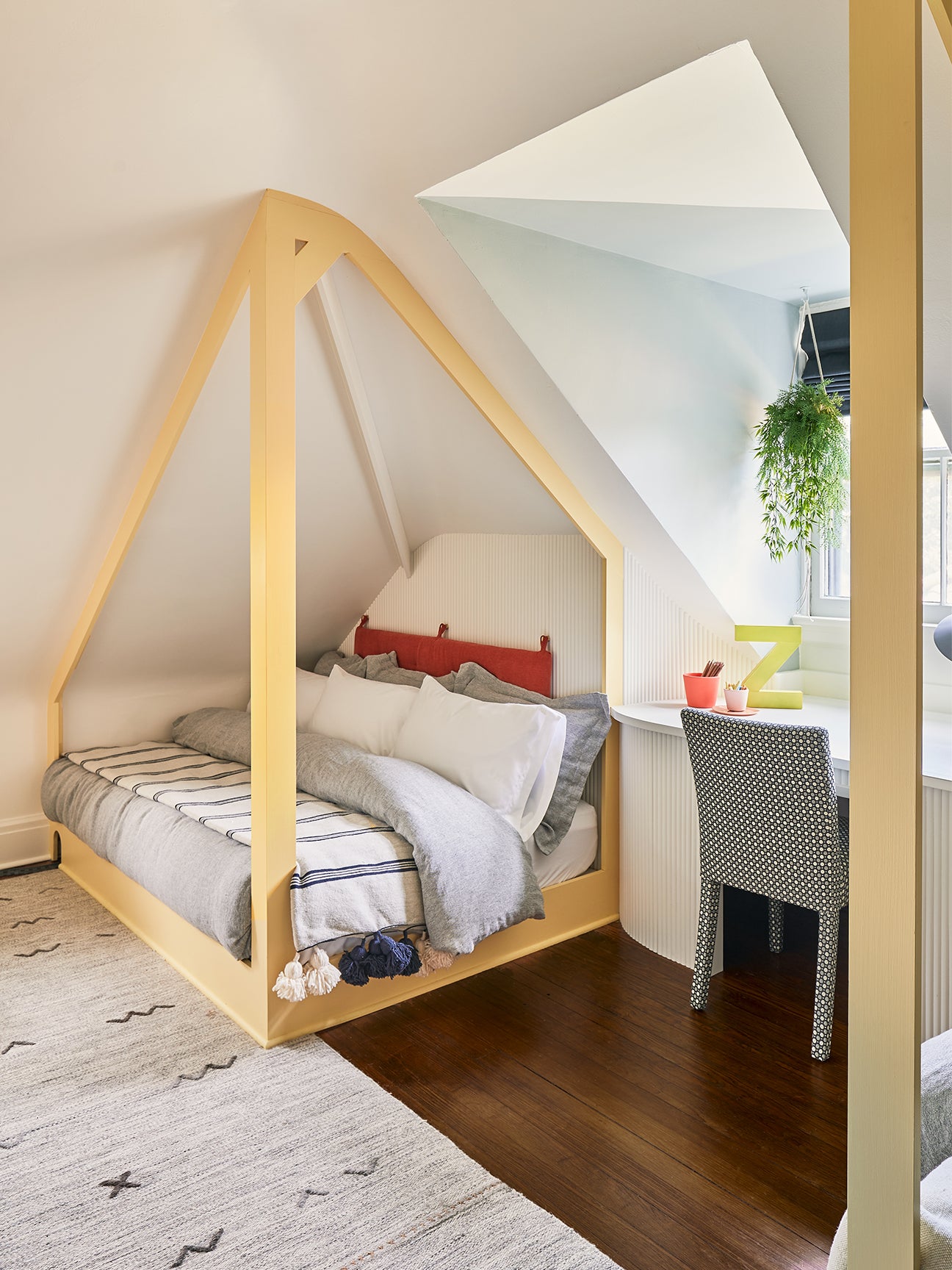 Having spent 20 years living in New York City apartments, Syeda and Michael Lewis were no strangers to working with confined spaces. But even though their newly purchased 1800 Colonial Revival house in Park Hill, New York, was cavernous by comparison, one area had them stumped: the attic. “The eaves were very much in the way and people were constantly bumping their heads,” remembers Syeda. “It was cramped and uninviting but had potential. The top floor, with its angles and little secret closets, had such a fun and magical quality that you almost felt like you were in a fairy tale.”

The Narnia-esque features and low ceilings made the space an obvious bedroom choice for the couple’s 3-year-old son, Zayn. After toying with more than 20 furniture plans, designer Blair Moore of Moore House Design came up with a brilliant idea: two canopy beds built into the roof lines. Determined to play up the quirky architecture while also incorporating Zayn’s love of trains, she turned an awkward layout into a fantastical wonderland.

Build Around an Elaborate Rail System

See the small arches carved into the base of the beds? It’s all part of an extensive electric train track network that runs underneath the four-poster structures and along the length of a secret 10-foot cubby hidden behind the beds. “We wanted to create hidden hiding spots and little nooks for him to play with his friends and watch the wagons circle around,” explains Moore.

Because the angled ceilings dropped almost to the floor, Moore had to use drywall in a portion of the room to create headboards for the beds. But instead of blocking off the hidden area behind it, she decided to turn it into a secret play space accessible through the built-in desk. “It has its own lights, a window, and of course the train track,” says Syeda. “It’s such an incredibly fun place to be in.”

Moore flexed her design muscles even further with the walls, which feature a series of color-blocked chalkboard paint shapes mixed with Farrow & Ball hues. The silhouettes that frame the window, creating depth, were imagined on the spot. “We were measuring with our team and noticed the most beautiful shadow lines cascading within the dormers,” remembers Moore. “We immediately thought we had to play on this, so we mimicked the light rays and enhanced them with pops of bright colors.”

To complement the buttery yellow hue of the bed frames, Moore covered the back walls in a ribbed tambour and DIY-ed fire-truck red headboards that she hung with inexpensive brass hardware from Knobs for Less. “We wanted to add a bit of cushion in case a slumber party resulted in a pillow fight,” says the designer. She finished the canopies with canary curtains that round out the palette—and made this house the one where all the neighborhood kids will want to hang out.

Discover more kids’ rooms we love: 8 Kids’ Room Ideas Far Bigger Than the Spaces They Live In This Little Girl’s Bedroom Reading Nook Is So Cool, We Want One, Too This Little Boy’s Bedroom Casually Has a Two-Story Slide