The magic is in their location. 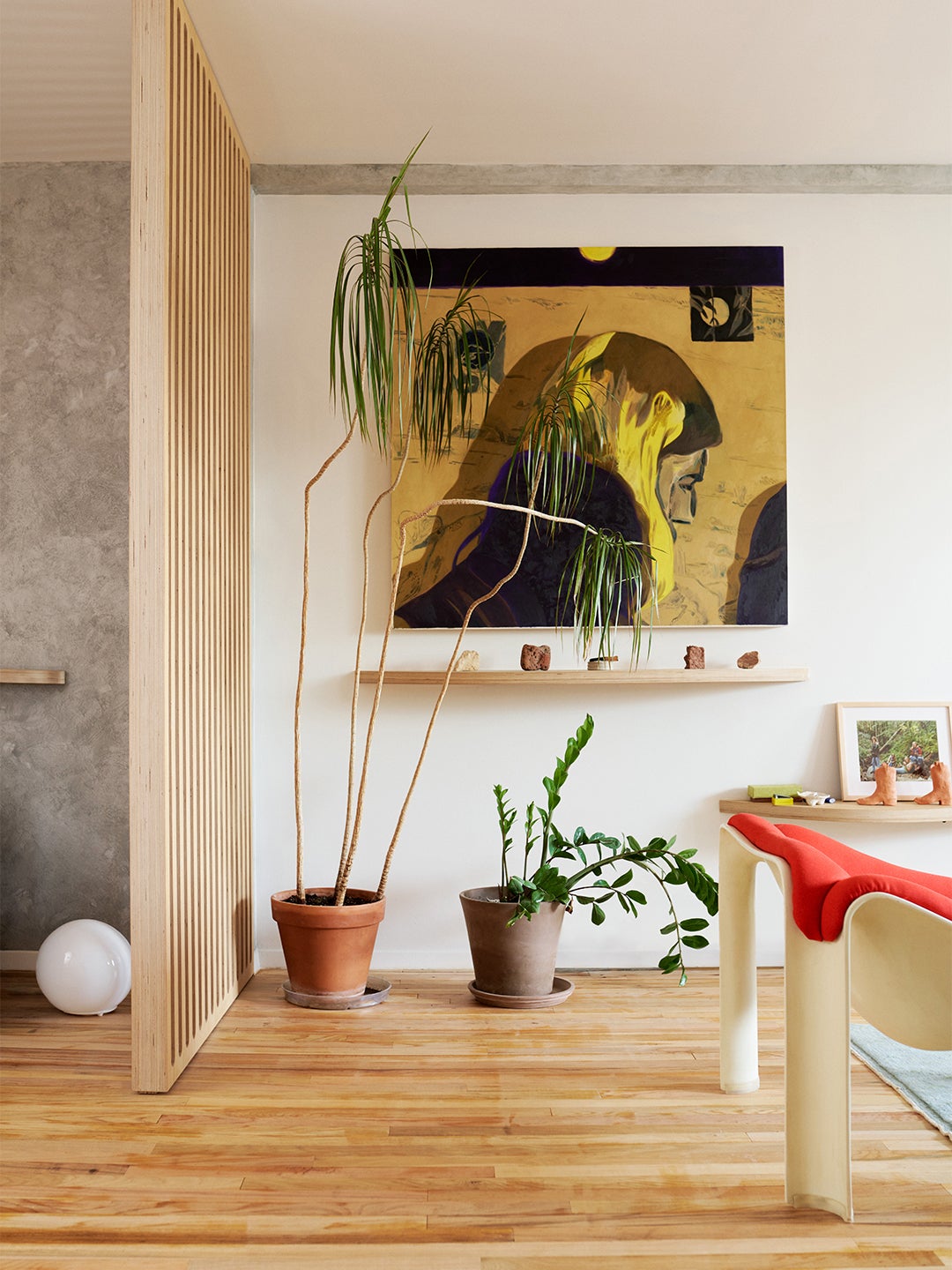 Creative couple Caroline Tompkins and Kevin Cudahy have rented their fair share of narrow, small, prewar New York City apartments. So when the pandemic hit, the two decided to take advantage of the buyer’s market, moving from their railroad unit in Greenpoint, Brooklyn, and purchasing a 1,000-square-foot condo in Ridgewood, Queens. But even with pluses like a balcony big enough to dine out on and an indoor garage that has already proven to be a lifesaver (if you’ve ever tried parking in this neighborhood, you know what they’re talking about), there were a few minuses.

For starters, a boxy, low-ceiling setup, glossy (in a bad way) builder-grade floors, and absolutely zero architectural charm were the exact opposite of their style. “We joked that it looked like the apartments divorced dads move into on TV, complete with plastic vertical slat blinds original to the building’s 1980s construction,” shares Tompkins. To create a far-from-bland haven, they called on Cudahy’s friend since high school, Michael Yarinksy, one half of the duo at Office of Tangible Space, for help.

“Michael was the first person I thought of to ask for guidance,” recalls Cudahy. “It’s invaluable to work with someone you can trust, especially when you aren’t quite sure what it is that you want.”

The one thing the couple did know was that they wanted their space to feel like an oasis. Not so much from the city, notes Tompkins (they take pleasure in the crowded streets), but from the once-strict distinction between their work and social lives. Unfortunately, the strange, original layout wasn’t doing them any favors. To separate the extra-large entryway from the living room, Yarinsky proposed a wall divider. But since he’s used to million-dollar budgets, he had to get creative on this scrappier project. “We had to do the most with very little,” he explains. “The screen wall system isn’t even millwork, it’s just fabricated plywood. But it holds the space really well and allows the light through.”

Yarinsky also kept on budget by deviating from his studio’s typical use of bold paint or punchy wallpaper and coating a few strategically chosen walls in Venetian plaster instead. “If you did plaster everywhere, it would have a lot less of an effect,” he says. Concrete-like in appearance, it added a much needed rich, textural element to the bedroom and living room, giving the space an earthier vibe and creating moments of contrast. “The material itself doesn’t actually cost that much; it’s the labor,” he points out. “You can go jump on YouTube and learn how to do it yourself.” His top tip: Experiment with small patches before tackling an entire wall; it’s easy to mess up.

At first, the furniture was too Miami Vice—a lot of chrome and glass—notes Tompkins, so the group worked to add in more playful pieces. In the living room, an Akari floor lamp is nestled next to a vintage Pierre Paulin lounge chair. In the bedroom, acrylic nightstands host abstract-like table lamps by Virginia Sun. And Tangible Space’s signature, curvy floating shelves can be spotted throughout, juxtaposed by the linear framed photographs and paintings. “We do a lot of things with curvature and custom millwork, and we can definitely go crazy-town for the right client on things like blob architecture, but we find that it feels better if you do it in balance,” explains Yarinsky.

Nothing Has to Be Permanent

Although the apartment is already outfitted with great finds purchased prior to moving day—Gae Aulenti chairs, a Herman Miller Chiclet love seat, and a George Nelson pendant lamp, to name a few—Tompkins advises to “think of your apartment as an evolving space. Furniture can come and go. Always reevaluate.” The couple have now taken up the search for a new dining table and Joe Colombo chair (Simone Rocha, if you’re reading this, please get in touch). “Kevin loves online estate sales and auctions,” notes Tompkins. “He drove two hours upstate to buy a basket painted like a watermelon. It takes time and patience.”