This NY home is the tranquil touch your work week needs. 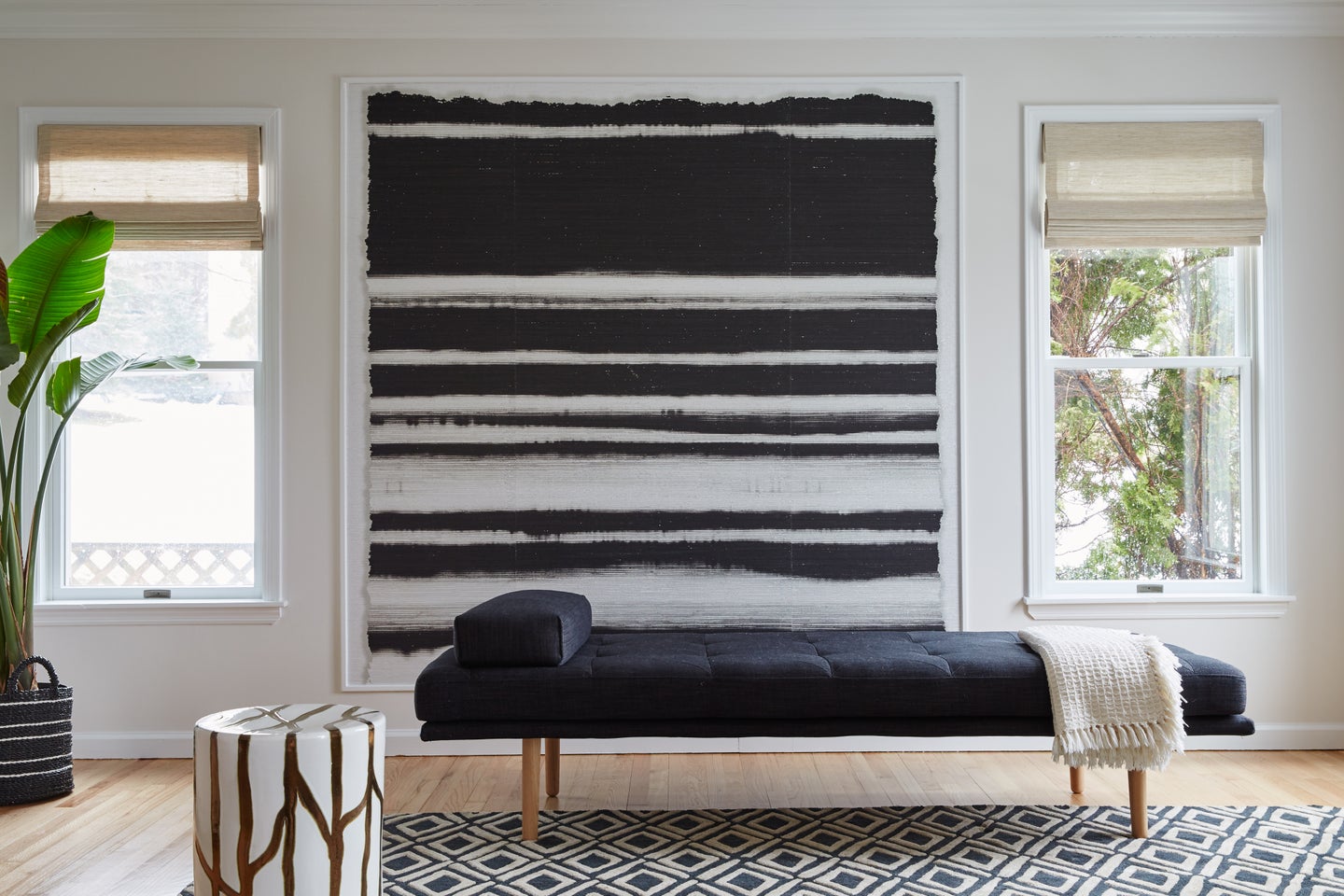 When longtime Manhattanites retreat to the suburbs, they do so in search of endless space to spread out. But after years of squeezing into tight quarters and sticking only to the essentials, those who make the anticipated trek out of the city are often surprised by how challenging it can be to fill a large home with, well, stuff. Michele and David Kleinmann are no exception. Upon moving to the quiet town of Scarsdale, NY last April, the couple was faced with over 4,000 sq ft to fill. To help cure their blank canvas, the couple tasked Homepolish designer Gianna Marzella with creating a home that felt multifunctional and, most importantly, full.

“The real challenge here was too much space. Sounds crazy right?! For apartment dwellers, extra rooms is a foreign concept. They just aren’t formal people and we didn’t really need to replicate another TV room, so we created a lounge intended for reading, playing (which is why we went with a very open layout), and working,” explains the designer.

A soothing mix of bold prints, natural textures, and refined art, Marzella wanted to achieve a look that discreetly blurred the line between casual sophistication and bohemian-cool.

“I really tried to base this design on the Kleinmann family’s general vibe and their personalities. They are modern but approachable, a little bohemian, but in a refined and sophisticated way. They continue to exude an urban sensibility, having lived in Manhattan for so many years, but we needed to translate that into their new surroundings in a way that still felt relevant to who they are,” Marzella tells Domino.

Bland and a bit dated, the bones of the house were as basic as it could get when the Kleinmanns first moved in. In addition to swapping out light fixtures and installing fresh window treatments, tackling the dining room—a space which now boasts custom wainscotting, metallic finishes, and a graphic wallpaper—was also on the pair’s must-have list.

“For the dining room, we wanted a big table for entertaining and to accommodate family get-togethers. Because the room is so big, I wanted something to break it up and make it feel like more like a dining room— hence the wainscoting we added,” says Kleinmann.

With longevity in mind, Marzella carefully considered how powerful to go when it came to picking a wall covering for the dining area. Because the wainscotting accounted for half of the wall space, the proportions were just right for playing up the drama.

“I don’t play it safe and love big impact, but I am thoughtful about how and where I execute that,” says the designer. “We typically spend less time in dining rooms than other spaces in the home, therefore there is less of a chance of tiring of such a bold statement. I am obsessed with this wallpaper but I don’t think I would have chosen it for a space where the Kleinmanns would be spending hours on end every day, like a family room.”

In the same way, organic shapes and lines define the dining area, Marzella embraced similar natural forms in the main living room. Though you might never know it, the show-stopping black and white piece that hangs just behind the modern chaise isn’t, in fact, a painting, but rather a slice of wallpaper.

“I immediately fell in love with [the wallpaper] but it was way too large for the room,” explains the designer of the refined hack. “I spent a good amount of time trying to figure out how to make it work. I cut out a lot of the negative space around what you see and designed a flat custom frame to be built around it so that it ultimately looks like a painting.”

While the home is certainly large enough to accommodate the couple’s growing needs, it was important to the now-family-of-four that each space serve multiple functions—like the custom desk that triples as a bonus workspace, spare storage unit, and a display for collected objects. “I drew on my previous hotel design work to approach the room from a multi-functional perspective,” says Marzella.

Large-scale art also doubles as a thread that ties each of the rooms together. Though they may take the form of different mediums (the large horse print over the desk and the abstract wallpaper print seem to strike opposite tones), their use of blacks, whites, and charcoal grays create a sense of cohesion. “I think the underlying serenity of these seemingly bold pieces makes them feel like natural partners. I see the space and the art selections as energizing and soothing at the same time,” she adds.

“Since I work from home a few days a week, we decided on a “lounge” concept, which combined an office with a living room and had a built-in desk with storage for me to work at, as well as some seating. We like hanging out in the lounge—it’s comfortable for me to work in there or to hang out while my daughter plays dress up,” notes Kleinmann.

Along the wall opposite the framed wallpaper, Marzella and Kleinmann opted for a more personal display of memories and familiar faces. While we tend to think of

in terms of abstract paintings, drawings, prints,  it’s clear that the focus of this display is family.

“I love photography and also loved the idea of making the lounge more personal and inviting by adding the gallery wall which is made up of family photos. It brings back good memories to walk by the wall, and I like that I can see part of it from our family room too. Now we just need to add photos of our newborn son!” says Kleinmann.

Not unlike the rest of the room, this photo-centric exhibit extends a sense of balance. Marzella’s number one rule for composing a stellar gallery wall? Cohesion. “It doesn’t mean all of the images must be sepia-toned, which is what we chose for this wall, but that something needs to tie it all in,” she suggests. Frames, scale, and subject matter are just a handful of ways to create a unified display.

“It just needs to feel intentional and read as one visual moment made up of separate, individual stories. There are people out there who will 100% disagree with me and say that as long as the composition is right, you can do anything you want. That is not untrue, it just isn’t my approach, which tends to be clean and modern.”

“We love all shades of gray, as well as blues, black and white. I’ve also been into touches of gold and brass lately,” says Kleinmann, who considers herself a modern minimalist.

In the master bedroom, the same tranquil palette that largely informed the downstairs takes a lighter turn. Peppered with splashes of velvets and blush pinks, the blue-green scene dishes up the right touch of calm.

Tour a Scandinavian Farmhouse Situated in the Heart of Texas